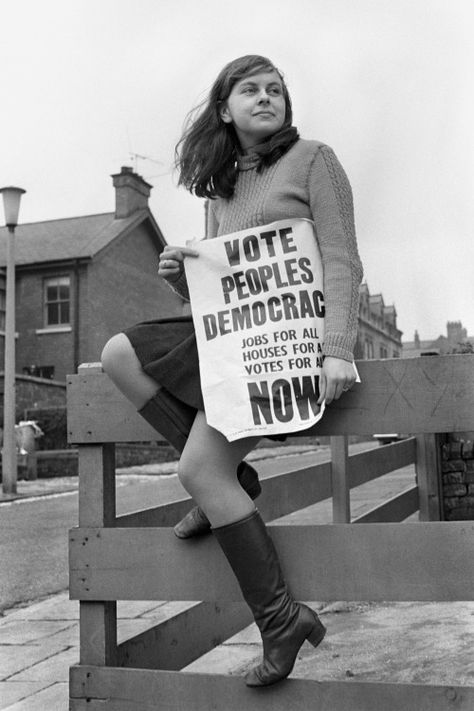 Initial doubts or outright opposition to the January 1969 march by Peoples Democracy from some nationalist and civil rights’ leaders gave way to support as the march was obstructed and repeatedly attacked.  At Dungiven Catholic schoolchildren left their classes to greet the marchers while Protestant children stayed in their classrooms.  Sympathy was widespread when the marchers were attacked at Burntollet in County Derry.  It was attacked again before entering Derry City, where the Citizens Action Committee organised a reception to welcome them to their final destination.

Severe rioting broke out in the city centre after the reception and continued for several hours afterwards.  Later that night a group of RUC men, some of them drunk, attacked streets on the edge of the Bogside, smashing windows and attacking people in the street.  The DCAC decided to withdraw its truce on marching and congratulated PD on its restraint, while one prominent DCAC member promised that ‘it would be hard-line militancy until they got what they wanted.’

The DCAC accepted the need for vigilantes to protect Catholic areas, under some pressure from republicans who were among the few groups prepared to take on this activity, although DCAC stewards, later to be members of the SDLP, were also involved.  It was not however the case that republicans were automatically looked to in order to provide defence.  There were hardly enough of them for a start.

For five days a ‘Free Derry’ was created with barricades ensuring no RUC presence in the Bogside.  Patrols of local people policed the area while the RUC was excluded.  A gable-end wall was painted – ‘You are now entering Free Derry’ – while a ‘Radio Free Derry’ was created as ‘the voice of Liberation’.   Unfortunately, none of this had been prepared and the majority of people were not ready for it or what it implied.  To maintain it required some other perspective on the way forward from that of the leadership of the Citizens Action Committee, which was not at all comfortable with this type of action.  After five days the leadership of the Committee rather quickly persuaded those behind the barricades to take them down.  As McCann noted “we had neither the organisation nor the means to put resistance [to the police] into effect,” noting also that the radicals were actually members of the DCAC. However, even had they not been, it was clear that they could not have prevented their removal.

Catholic sympathy with O’Neill waned when he criticised the Burntollet marchers and their “foolhardy and irresponsible undertaking”.   Some of them were, he said, “mere hooligans ready to attack the police and others”.

While he also condemned people who “have attempted to take the law into their own hands in efforts to impede the march” and also their “disgraceful violence”, these people were simply “playing into the hands of those who are encouraging the current agitation.”  “Enough is enough, he said.  “We have heard sufficient for now about civil rights: let us hear about civic responsibility.”

Soon after Burntollet another demonstration was held in Newry organised by the local PD branch, which again faced the threat of a loyalist counter-demonstration in the mainly Catholic town.  Even when this threat was withdrawn the march was rerouted, which led to a riot, with police tenders burned and pushed into the canal that runs through the town.  The march organisers lost control while many civil rights supporters made claims that the attacks had been deliberately facilitated, with later strong suspicion of actions by an agent provocateur.

The Newry march led many people to conclude that civil rights demonstrations could no longer be carried out peacefully and that the movement had lost control over the more hot-headed and extreme elements of its support. In fact, between the end of January and the end of July 1969, there were ten occasions on which civil rights activities led to trouble and twenty-one in which they were carried out entirely peacefully, including another march in Newry on 28 June. The issue of marching however was thrust into the back-ground when Terence O’Neill called a general election for 24 February.

O’Neill faced more cabinet resignations after he announced a Commission of Enquiry into the recent events, while a majority of backbench Unionist Party MPs were now opposed to him with twelve meeting to call for his resignation.  He then called the general election, in which the Unionist Party consisted of both pro and anti-O’Neill candidates, so that some of the official Party candidates supported him and some opposed.

The election appeared to settle nothing, with pro-O’Neill candidates getting nearly 142,000 votes and eleven seats, and the anti-O’Neill group getting nearly 131,000 and twelve seats.  O’Neill himself just scraped through in his own constituency.  Among the opposition, leaders of the civil rights movement ousted Nationalist MPs, with John Hume and Ivan Cooper elected.  The NILP made little impression losing one seat, retaining another and gaining one through Paddy Devlin, who had been active in the civil rights movement.  Devlin and six Nationalists were shortly to break with their parties and form the Social Democratic and Labour Party (SDLP), that was social democratic only in the sense that it didn’t particularly advocate anything else and Labour only in the sense that two of its MPs used to call themselves it.  The struggle for civil rights was breaking up the old parties and either replacing them or changing their character.

Peoples Democracy stood in the election on a manifesto which encompassed the established civil rights demands on the franchise, state repression and housing allocation, and added other demands such as a crash housing programme, state investment and state-owned industries with workers’ control, integrated comprehensive education and a break-up of large estates in the west to provide land for co-operative farms.

No seats were won, but PD candidates totted up 25,407 votes. Eamonn McCann stood as an NILP candidate in Foyle and if his 1,993 votes are added to those of PD, it amounted to 29 per cent of the total poll in the seats contested. In South Down, Fergus Woods came within 220 votes of unseating the Nationalist MP.

PD’s support ranged widely, from 9.2 per cent of the poll in Belfast Cromac (the only lost deposit) to 48.8 per cent in South Down. The average over the nine constituencies was 26.4 per cent. This was not strikingly different from the performance of other unsuccessful candidates with a civil rights record. Erskine Holmes of the NILP got 29 per cent of the poll in Belfast Ballynafeigh, Sheelagh Murnaghan of the Liberal Party got 14.8 per cent in North Down and another Liberal, Claude Wilton, got 35.1 per cent in City of Londonderry

Bernadette Devlin in South Londonderry achieved the best result in a Unionist-held seat, with 38.7 per cent of the poll, but this was almost the same as the Nationalist candidate who had fought the seat in the 1965 general election. In South Down, which included Newry, “the performance can best be comprehended less as a People’s Democracy achievement than as general Catholic support for a civil rights candidate.”

A new, more radical NICRA executive was elected, including two PD members, while four of the ‘Old Guard’ resigned in protest at the increased militancy of the movement.  This was partly in response to the repressive policies of the Unionist Government, which had introduced a new Public Order Bill, and partly by continuing attacks on civil rights demonstrations by the police.  In April a Westminster by-election in Mid-Ulster saw the PD candidate win the nomination as the anti-Unionist candidate, and Bernadette Devlin was duly elected with the biggest anti-Unionist majority since the seat was created in 1950.

The march to Derry, at a time when NICRA had called a truce, did not imply as profound a difference between it and the PD as might be supposed. One of NICRA’s leading members, Frank Gogarty, stated that they had been ‘blackmailed off the streets’ by loyalist intimidation and police repression. But they ‘would not remain off the streets forever’. The Government would have to give them a ‘definite timetable of reform’ or they would go back to the streets “and protest louder than ever”.

NICRA also felt obliged to extend its demands by changes in the political situation. It was not prepared to accept O’Neill’s promises and it wanted to keep up the momentum of the campaign. This made it necessary to make radical demands and to enter qualifying clauses on its former simple and clear-cut aims. A NICRA circular pointed out that the shortage of jobs and houses created a situation in which discrimination flourished, and demanded that the Stormont and Westminster Governments fund a crash house-building programme, while in areas of high unemployment the Government should start local industries as they had started the Forestry Commission.

It called for trade-union law to be brought into line with British law, for the disbandment of the B Specials and for the RUC to cease carrying revolvers. It had, in other words, adopted a number of demands that had been put forward by Peoples Democracy. Both organisations were opposed to Stormont’s new Public Order Bill, which made it necessary to give longer notice of parades and banned counter-demonstrations, sit-downs and the occupation of buildings.

The campaign appeared to have the support from the full range of forces it had previously encompassed, from the Nationalist Party to the Labour left.  At one sit-down protest John Hume insisted that “the politics of the street must continue until fundamental justice has been achieved”; but only a week later a repeat of the October 5 march in Derry was followed by clashes between Protestant and Catholic youths, and the other prominent MP Ivan Cooper declared that he would “press for an end to marches.”

A demonstration to re-create the January PD march from Burntollet was cancelled at the last minute with the resulting confusion prompting youths in Derry to carry out a sit-down protest that was then broken up by the RUC.   While this was happening loyalists confronted Catholic crowds in the centre of the city, which the RUC attacked leading to three days of ferocious rioting.  During the clashes some RUC pursued rioters through a house in the Bogside, severely beating several people who lived in it, including the father of the household, Samuel Devenney.  Part of the Bogside was evacuated while republicans organised defence committees and the moderates of the DCAC sought to avoid clashes between the Catholic population and the RUC.

The behaviour of the RUC, defence from their attacks and the end of Catholic support for it, or even tolerance of it, became the primary immediate issues.  The RUC, in the words of a senior English policeman, was ‘not a police force in the English sense.  It is a para-military organisation accountable to a minister.’  At this time around 10 per cent of the force was Catholic and, alongside the Orange Order, was an important pillar of the Unionist regime.

While, until the summer of 1969, most of the violence that had erupted had been confined to Derry, this now changed.  That the character of the problem had already changed in Derry, where the existing civil rights agenda of an end to discrimination had been to the forefront, showed that the rapid shift to one of defence from the RUC was inevitable given the thoroughly sectarian character of the state machinery and composition of the unionist regime.

Without satisfactory reform the civil rights movement would not and could not be prevented from going onto the streets, despite the misgivings of many ‘moderates’, but equally the unwillingness of the Unionist regime to grant the reforms meant their sectarian police force were placed in the way of protest.  The Stormont government’s Public Order Bill signalled that the Unionist Government were attempting to employ repression to substitute for the full reforms the civil rights movement demanded.  But this was to fail very quickly.