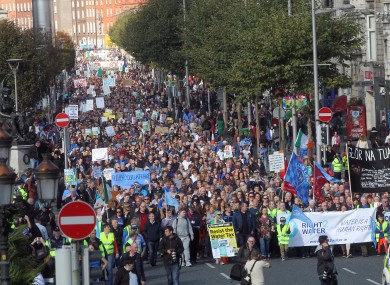 I was sitting in a small café at 12 o’clock having a cup of tea and a bacon sandwich, with customers at only two other tables.  A group of four elderly people were talking at one while three middle aged men were talking at the other.  Both were discussing the water charges, their opposition to them and the march they were going to join in one hour’s time.

I joined a feeder march at Pearse Street that went up Dame Street, up to York Street, where it collected some more supporters, and then went round to St Stephen’s Green to stop  a few minutes outside the Dail to tell the Government that they “could stick their water meters up their arse”.  Even the Guards on duty outside had a smirk.  The thousand or so then took off to join the main rally outside the GPO in O’Connell Street where a number of other marches converged.

The demonstration was not as large as that of a few weeks before, which was estimated as 100,000, but this time there were dozens of other marches being held right across the State in cities and towns big and small.  Estimates are that in total the numbers were greater – 150,000.

On 11 October the apparently sudden scale of the opposition to water charges was reinforced by the victory in the Dublin by-election of the Anti-Austerity Alliance candidate, who defeated the firm favourite from Sinn Fein because that party had done a little too much talking out of both sides of its mouth and was seen as insufficiently opposed to the charges.

Sinn Fein posters were in evidence on the march on Saturday and it was noticeable that flags and banners from other republican groups were also in evidence.  The left groups were more peripheral than is usual in such marches and I didn’t see one trade union banner, although I could easily have missed it.

The demonstration was overwhelmingly working class, composed of what many on the left call ‘ordinary people’, although I’ve never considered myself extraordinary for example.  The other noticeable thing was the folk songs sung from the stage, the references to James Connolly and 1916 and the general referencing to Ireland’s rebel history.  It is as if, at least sections of the Irish working class go to sleep for a few years and that when they periodically wake up they look back to their greatest struggles and leaders, when their intervention into Irish history appeared to promise a new future. That hasn’t really been the case for a long time, at least in the South.  A Northern banner in solidarity might have highlighted the unfinished business.

While I was in the café I was reading ‘The Irish Times’ and in particular an article by Eamonn McCann entitled ‘Public finally take to streets as water proves a tax too far’.  I’m sure he didn’t write the headline so it is no criticism of him to point out that demonstrations in Dublin of 100,000 against austerity have already taken place over the last five years or so.  They were organised by the trade union movement and the demonstrators were betrayed by the leaders of that same movement, as McCann alluded to in his article.

So what makes this movement different, if it is?  Firstly there is a view that it could succeed, in fact an argument can be made that it is already succeeding.  The Government parties have already responded by concessions in the budget to lessen the impact of the charges and did so in such a hurry they messed it up.   The newspapers, radio and television news are full of reports of the panicked reaction by Government politicians, especially with an election around the corner; hundreds of thousands of registration forms sent by the new Irish Water company have not been returned and the deadline for returning them has been extended to the end of the month.

Opinion polls confirm the unpopularity of the charge and the effect of this on the popularity of the Governing parties.  Labour is already a dead duck and Fine Gael support has fallen while support for Sinn Fein and ‘independents’ has grown.  The new company is particularly disliked because of the millions of Euros being spent on consultants for a service the state has been providing for years (the same thing happened in the North when Northern Ireland Water was created).  Bonuses are also to be paid to Irish Water staff with those at the top getting much larger amounts than those at the bottom, with the added insult from the company that they continue to peddle the line that they aren’t really bonuses.

Irish workers facing these costs believe that they are already paying for water so in effect they are being asked to pay twice and for huge management consultant bills and bonuses on top.

But previous, more outrageous decisions have failed to generate resistance that actually looks like it might win.  The decision to bail out the banks, costing over €64 billion, dwarfs the water charges in scale, with bankers hardly more popular than the Executives of Irish Water – and bankers’ bonuses have certainly been larger.   So what has changed?

Going back to Eamonn McCann’s article in ‘The Irish Times’:  he says that paying for a substance so natural sparks a particular anger.  But this isn’t really the case – in the café one guy was saying that he would be prepared to pay for water, but not twice and not for the consultants and bonuses.  This, I think, is the widespread view.  People are aware that they have to pay for water and sewerage services and they know this because it is obvious.

The headline over the article by Eamonn McCann in ‘The Irish Times’ said ‘Public finally take to streets as water proves a tax too far’; and that is the main reason for the resistance – it is one step too far.  As one of the leaflets given out at the demonstration put it -“No more.”

The whole austerity offensive, austerity budget after austerity budget, the state effectively bankrupt, posed the question of how to resist – what to do?  And resistance had to have some idea of an overall alternative.  The Irish working class didn’t know what such an alternative would be and didn’t buy the one sold by most of the Left.  I have examined this alternative in a series of earlier posts, for example here, here and here.

On the other hand workers are now being told that economic growth is not only on the way but has actually arrived.  Unemployment has fallen and tax cuts are promised while cuts in services will end.  Things look like they may have bottomed out.  They don’t think that they need to pay this unfair bill and what’s more they think that there is something very practical that they can do to stop it.

They won’t get their water turned off if they don’t pay.  As a commercial semi-state company the money can’t be taken off them through deductions to their salaries and wages.  Sure there is the possibility of court cases but cases against hundreds of thousands?  Even reduction of water pressure to the home is not so easily achieved and possible to prevent with direct, mass action.  In other words it is beatable and the disarray of the Government has demonstrated to many that it can be beaten.