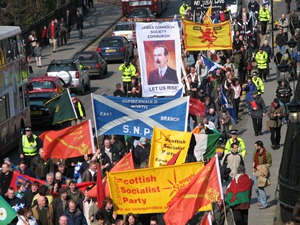 Davidson mentions “that one immediate consequence of Scottish independence would be to place a question mark over the existential viability of Northern Ireland” and that “Sinn Fein would almost certainly begin agitation for an all-Irish referendum on reunification.”

A question mark has always hung over Northern Ireland’s existence which is why politics is permanently structured into parties for and against it. Sinn Fein has already accepted the legitimacy of the Northern Ireland State through support for the Good Friday and St Andrew’s Agreements so any call for an all-island referendum does not and will not remove the unionist veto on reunification.

This shows the difference between the referendum in Scotland that will allow a feely expressed vote that would be implemented and a putative referendum in Ireland that would not have binding effect, would not from the outset guarantee the wishes of the majority and would be preceded , accompanied and followed by threats, intimidation and violence.  We know this because we have seen it before.

Unionists will not cease being unionist because Scotland separates from the UK.  Their loyalty is ultimately to themselves and to whatever privileges they still have, think they have or want to reacquire.  They were willing to smuggle German guns into Ireland to fight their own Government’s declared decision to grant Home Rule at a time when Britain and Germany were involved in an arms race and heading towards war.  Scottish separation will not promote any anti-imperialist end in Ireland and no wing or branch of the Scottish independence movement could honestly claim one.  From the SNP to the Scottish Socialist Party they have shown themselves to have no fundamental objection to British rule in Ireland and the SSP’s guttural ‘full-blooded’ socialism saw blood drain from its face at the prospect of taking an anti-imperialist position on Ireland.

There is therefore no evidence for Davidson’s claim that “independence can be supported as a means to an anti-imperialist end, rather than as part of the political logic of Scottish nationalism.”  The independence movement is led and dominated by a pro-imperialist party and the argument has all been about the logic of nationalist separation.  So much is this the case that this nationalism has infected and taken over much of the Left.

Davidson calls for the ‘fragmentation’ of the British State as if this was some great anti-imperialist goal when it simply amounts to creating a new capitalist state based on nationalist identity where one based on multi-national identity existed before.  It is what people are for and not what they are against that defines a movement’s politics and there is nothing progressive about this ‘positive’ nationalist programme.

The splitting of the British State is proposed by the left as if it was some analogue of the Marxist view that the capitalist state should be destroyed, ‘smashed’ is the usual term used, but setting up two capitalist states where one previously existed is clearly something entirely different.

It is not even that smashing the capitalist state is the primary goal of Marxists.  This is only necessary as the necessary adjunct to creating a workers’ state where the positive rule of the majority is assured.  But clearly what is being proposed as some sort of solution, however interim, is not a workers’ state but a new capitalist one.  One that is apparently endowed with all sorts of positive attributes, necessarily so otherwise there would be no justification for calling for its creation.

So, for example, schools are managed and controlled by teachers, parents and the local community with any support functions such as advice on education policy, that might be seen as a state role, being provided by organisations of those concerned with these issues such as teachers, academics, educational psychologists, parents’ representative’s and pupil representatives.  How much to spend on education, whether to prioritise primary, secondary, tertiary or continuing learning would be a result of debate within society and not restricted to professional politicians and unaccountable civil servants.

This vision is very far from much left striving for an enlarged social-democratic state that dominates society.  It is light years from seeing some sort of solution arising from a new capitalist state.

It is no reply to this view to claim that the demand for a new, national, capitalist state is a stepping stone to this objective, which is anyway a very long-term goal.  This is because the steps towards it have actually to be steps towards it.

A second reason given by Davidson for supporting independence is that increased devolution, the alternative to independence, has now become a means of delegating responsibility for the imposition of neoliberalism, and in this way a means of legitimising and imposing its demands on the population. This is done through greater involvement of the middle class in decision making.  Independence on the other hand would increase “the ability to hold elected politicians to account” and “in particular, it would make it more difficult for the SNP to blame Westminster for the decisions that it has taken with regard to imposing the austerity programme.”  All this “without fostering any illusions in the ability of individual states to remove themselves from the pressure s of the capitalist world economy.”

So Davidson says the SNP would not have any excuse but actually accepts that it has something better than an excuse – that it would face the reality that Scotland cannot insulate itself from the pressures of the world capitalist economy.  The Irish State has had no excuse that its austerity programme is caused by the Brits but the demands of the world capitalist economy is a much more powerful argument to justify its actions.  The need to defend the Irish State and to accept the demands of US multinationals, for example that they pay next to no tax, has been accepted by the majority of the Irish people.  This is so even when they are told the State is bankrupt, their taxes must go up and state services and investment cut drastically.  Armed with a nationalist victory the SNP will find no difficulty in doing the same and the negotiations with Westminster after any Yes vote will provide ample opportunities to blame ‘London’ for failure to deliver all the good things promised from ‘independence.’

The fundamental problem with ‘holding elected politicians to account’ is not the nationality of the state, not its extensive or reduced geographical scope, but the fact that it is a capitalist state that imposes political decisions and a capitalist economic system that sets the framework and rules under which the state functions.  One can therefore no more make the capitalist state accountable to the people than one can make the capitalist economy accountable to the people and this goes for the politicians who preside over it, who may change from election to election.

Whatever limited effect can be imposed on the state or workings of the economic system depend fundamentally on the power of the working class and whatever allies it creates – through trade unions, campaigns etc.  Unity of the class is vital for this which is why socialists oppose nationalist division, most particularly where it does not already exist.

The argument that devolution is effectively delegation of responsibility for imposing neoliberalism could equally be said of ‘independence’, perhaps with even more force.  The argument that it is the middle class who would disproportionately take part in decision making is one that applies to much of the middle class support for independence.  This support sees a refashioned Scottish State as giving rise to opportunities for itself in jobs and patronage.  A reflection of this has been the widely publicised controversy about too many English people in the governance and administration of Scottish arts; an example of the xenophobic face of nationalism that supposedly doesn’t affect its Scottish variety.

Davidson states that “socialists may wish they were not faced with this issue” but they are and “we are rarely granted the luxury of deciding the terrain upon which we have to fight.”  Of course the latter is true but this does not justify taking a nationalist position upon this terrain.

One might be charitable and agree that socialists may wish that they were not faced with this issue but the evidence is that the majority of the Left in Scotland positively fought for it.  The question of independence is not something imposed on this Left but something they have earnestly desired.  The divisions engendered by it are therefore their responsibility to the extent that they are responsible for the nationalist advance. In mitigation it must be admitted that this is not that much.

Unfortunately this is now also true of Davidson, who there is some reason to believe did not want this issue to grow to its current prominence.  However the most worrying aspect of the position of this Left and of Davidson is that even if there is a No vote, as Davidson himself expects, neither he nor the majority of the Scottish Left will accept this decision.

It would appear that they will still fight for independence even if the majority of the Scottish people oppose it.  No doubt they will still do this under the banner of self-determination even though they will be rejecting it.

The nationalist cause has created and deepened political division within the British working class and the vote in Scotland will demonstrate that it has done this within the Scottish working class as well.  The duty of a socialist is to defend and promote workers unity and in this case to build up and repair any damage done to it.  Continued campaigning for a new Scottish State when the majority have rejected it would reinforce division.

Even where independence is justified it is incumbent on socialists to promote workers unity, expose the lies of nationalism and expose the antagonistic interests of workers and bosses of the same nationality.  The majority of the Scottish Left has signally failed to do any of this.

Tagging behind the nationalist demand for independence, even if rejected by a No vote, would only further demonstrate that their programme is a nationalist one despite Davidson’s claims to the contrary.  It would signal yet another postponement of any struggle based on class interests.

And what if there is a Yes vote?  Would this Left drop the nationalist stuff and discover some sort of appetite for socialism?  Unfortunately the evidence of the Independence campaign is that they would then go on to demand ‘real’ independence, whatever that is.