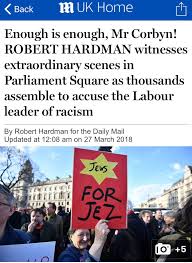 As Members of the British Parliament go, Jeremy Corbyn has a record of opposing racism, including anti-Semitism, that is second to none.

So, days after waiting for the anti-Semitism charges against him to evaporate from the news – on the grounds that they are patently absurd –  they still loom large.

Thanks to the BBC, we are to remain entirely ignorant of the fact that those whom the BBC seek to have denounced are themselves Jewish!

Again, after days of having anti-Zionism conflated with anti-Semitism, so that the two are indistinguishable, the BBC reports that, ”during protests” and after “clashes”, which leave “16 Palestinians dead and hundreds injured” we are informed that “Israel’s response was exaggerated.”

Just so, unlike the repeated reports of the Labour Party’s anti-Semitism.

And there really is no point in anyone in the Labour Party denying it.  Because that is precisely the problem!

So, as Tony Blair – once described as “the worst terrorist in the world” – put it on BBC Radio 4’s The Week in Westminster, “It’s become a problem because I’m afraid the people around Jeremy Corbyn – maybe even he himself – I don’t think they really think it is a problem.”

So, there you go.  Denial is proof of guilt.

Not since the witch hunts of the 16th and 17th centuries, when women were dunked in water, has it looked such a lost cause to declare one’s innocence.  For the poor unfortunate women so denounced, if they floated they were witches, and if they didn’t, they weren’t”

And there is also really no point in Corbyn looking to supporters to defend him instead.  Because, as last night’s ITV reporter said to the other ITV reporter, the latter obviously speaking as an expert unbiased summariser of what is really going on – Corbyn has to reject his supporters as anti-Semitic to prove he’s not.

Then, having done so, we will, with little doubt, wait expectantly for the BBC to report that Corbyn, (we’ll just use his surname from now on) has no support, because of his anti-Semitism of course.  Corbyn anti-Semitism, anti-Semitism Corbyn, anti-Corbyn anti-Semitism.  Just put the words together often enough, and in no particular order, and that will do.

If there is a lesson to be gleaned from this ‘fake news’, it is the one that armies have long understood. While you can capture enemy soldiers and put them in camps, you shoot spies.

In this case, the most immediate enemy one can throttle (metaphorically speaking of course) are the phalanx of Blairite Labour MPs who have been the ‘credible’ ingredient of this poisonous and preposterous mix of accusations.

It reminds one that there must be elections coming up; the local elections in May.  Time to shit on your own doorstep and blame someone else for the poor reception to your ‘for sale’ sign outside.

If anyone thought Jeremy Corbyn’s landslide election as leader was going to unite the Labour Party around him, including the crowd of careerists at Westminster, then this was surely disabused when Owen Smith had another go and got trounced.  If anyone thought that this second thumping victory was going to make loyal supports of these expense claimers who couldn’t spell integirty, then they were disappointed again.

And if you thought that the snap General Election, in which the widespread presumption was that Corbyn’s speaking part was to walk on and get crushed, was final guarantee that the Parliamentary Party would unite around him.  Well, you really should have known better.

Unfortunately, despite all these lessons, despite all the deceit and betrayal; someone who also appears not to have learned the lesson is Jeremy Corbyn himself, although I hasten to add, it’s not too late.

The view that the Labour Party is a (very) broad church is really only accepted by the right of the Party when it is in the majority, and the left is considered to be irrelevant, like, for example, in the first half of  2015.  The left on the other hand, at least many of those in the Corbyn camp, seem to believe it even when the knives, wielded by Blaire hands, go repeatedly into their chest right in front of their eyes.

The theory would seem to be, if theory is not too strong a word, that keeping the Party united will help get a Labour Government elected.  And then it can go do all the good stuff it has promised.

The two flaws in this ‘theory’ are too obvious to dwell on.  The Party is patently not united.  And the same MPs who seek to thwart Corbyn’s leadership in opposition will be even more keen to do it should he cease merely to be in opposition.

Turning the other cheek to Blairite sabotage has left Jeremy Corbyn without any cheeks to turn.  Ignoring the cardinal need to democratically clear out the host of Blairite/right wing/’soft’ left saboteurs inside the party, and to do so openly, as a campaign to democratise the Party, has left him exposed to the latest assault, which will assuredly not be the last.

So right now, either he fights the ludicrous charges of anti-Semitism and stops apologising for non-existent political crimes, or he may be left to float helplessly in the water waiting to be burned, or at the bottom of the water, proved innocent and much lamented, definitely eulogised, and very definitely history.

PS: Update 3 April.  Jeremy Corbyn has met some Jewish people – see link.  But this is “irresponsible and dangerous” according to a Labour MP. He’s meeting the WRONG sort of Jews!  Isn’t this man just infuriating?  Doesn’t he know that being anti-Semitic means some Jews are good and some aren’t, and it’s only anti-Semitic when you don’t agree with the establishment ones?  I mean to say, how can it be reasonable for a left wing leader to meet left wing Jews and not demonstrate similar feelings towards the right wing sort?  It’s not as if Jewish people are just like everybody else – is it?