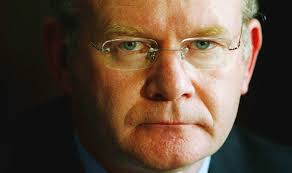 On October 24 1990, a Derry man Patsy Gillespie was abducted by the IRA, tied to the driver’s seat of a van and told to drive the van packed with explosives to a British Army checkpoint on the border with Donegal.  While doing so his wife and children were held at gunpoint.  Two other such bombs were also delivered to targets on the border on the same day.  Using others to deliver bombs was a well-known IRA tactic and almost inevitably the driver got out at the target and warned of the bomb.

This time however the bomb was to be detonated by remote control or by the door of the van being opened, which Patsy Gallagher did as he struggled to free himself and get out of the van.  When it opened five British soldiers and Patsy Gallagher were killed; the largest part of him to be retrieved afterwards was part of his hand.  The use of a ‘human bomb’, as it was quickly called, caused widespread revulsion, including among nationalists.

Patsy Gallagher was killed because, according to the IRA, he was “a part of the British war machine”. He had been warned to leave his job because he worked at a British army base, as a cook.  He was, to use a more old-fashioned phase, a ‘collaborator.’

The deployment of three such attacks on the one day would had to have been sanctioned by the Northern Command of the IRA, whose Officer Commanding was Martin McGuinness.

Just under a decade later he was Minister of Education in the Northern Ireland Executive, the administration devolved from Westminster.  His Sinn Fein colleague in the Executive was Bairbre de Brun, who was Minister of Health.  One of her more important acts was to launch a review of acute services in Northern Ireland: “I want to hear all the arguments and weigh up the options before taking any final decisions. To put me in a position to take the necessary decisions, I need measured, informed and objective advice on how acute services can best be developed to meet the needs of our people.”

To lead this review she appointed a well-known figure, Maurice Hayes.  He had been the most senior Catholic civil servant at Stormont, supplying weekly reports on politics in the Irish State to the Northern Ireland Executive in 1974; later becoming head of personnel for the Northern Ireland Civil Service, Permanent Secretary of the Department of Health and Social Services and later Northern Ireland Ombudsman. He was Electoral Boundary Commissioner, a Senior Advisor to the Chair of the Constitutional Convention, a member of Lord Patten’s Commission to reform the police in the North of Ireland, and authored the report which led to the establishment of the office of Police Ombudsman.

In other words it could be said, if one wanted to, that when Sinn Fein got into office they asked the most senior ‘collaborator’ around to help them decide what they were going to do now they had got there.

Of course, Martin McGuinness was later denounced for various actions by other republicans, including his condemnation of these republicans as traitors for shooting British troops; and for toasting the Queen in white tie and tails at Windsor Castle.  These were high-profile events but they were mainly symbolic.  The killing of Patsy Gallagher for being “a part of the British war machine” while hiring the biggest ‘castle Catholic’ when it entered office were not symbolic but very real.  These events tell us most of what we need to know about the politics of Martin McGuinness and Sinn Fein.

A working class cook had become a ‘legitimate target’ in a war which, when it ended, they could think of nothing better than to ask one of the most prominent Catholic establishment figures for advice on what they should do.  Militarist ‘anti-imperialism’ gave way to equally ineffective subordination as a parliamentary ‘opposition’ to British rule, an opposition that involved not being in opposition but being in government.  And with a party so right wing its antediluvian views resembles closely the most rabid base of Donald Trump.

Throughout their evolution, no matter what its twists and turns, the movement exhibited a complete lack of class politics.  The socialist opinions of some masked the right-wing politics of the movement as a whole.  As the old adage goes, opinions are like assholes – everyone’s got one.

The movement has been a vivid demonstration of lessons not widely enough appreciated – that ‘anti-imperialism’ does not necessitate socialism and that a predominantly working class base does not equate to politics defined by class.  A socialist assessment of the political life of Martin McGuinness that does not register these facts is worthless.

This is important because the political assessment of someone’s life often becomes more important than that life’s impact when it was lived.  Gerry Adams claimed that “Martin McGuinness never went to war, the war came to him.”  But this of course is untrue.

Martin McGuinness and the Provisional IRA did go to war.  The necessity for armed defence against sectarian pogroms was usurped by the Provisional IRA into a conscious offensive war that promised victory ’72, ’73 etc. It was they who claimed that only the IRA and its armed struggle could bring victory, by which they meant a united Ireland; but their struggle degenerated as the British State inevitably crushed it by its superior power.   They failed so comprehensively they now pretend this war was about something other than declared at the time, all about equality and not ‘Brits Out’.  In all this Martin McGuinness played a leading role.

I remember being asked by the wife of a republican whether I thought Martin McGuinness was a British spy.  Not because I had any more knowledge of the secret war than she had, because I was pretty sure I had less, but because despite this she really didn’t have a clue, or rather the clues were useless.  She simply wanted another opinion of someone who might have thought about it from a different perspective from her own.  The important point is that it was a legitimate question and one that will probably never go away (see the posts here and here.)

Politically it doesn’t really matter, because informers are as much a part of the republican movement and its history as anything else.  Secret conspiracies are particularly vulnerable to much more powerful secret conspiracies to counter them, and the British state is not short on this resource.  The role any individual can play is limited in most circumstances and particularly so  in the oppressive circumstances in which McGuinness was politically active.

His legacy is one of a failed armed campaign and collapsed political arrangements at Stormont that he fought doggedly to promote.  But the grubby reality of the latter is as clear as the brutality of the former.  This includes broken Sinn Fein promises to oppose welfare cuts and support for austerity and sectarian patronage.

No amount of media spin, lamenting the botched implementation of a renewable energy scheme, or failure of the institutions to deliver effective government, can hide the fact that the scheme was not botched – it worked perfectly – and Stormont is still effective in containing politics within sectarian boundaries, even when it only functions as a prize still to be realised.

In the latter part of his political career Martin McGuinness must be judged on both his pursuit of such an unworthy goal and his failure to achieve its lasting implementation.  To rephrase slightly: pity the land that needs heroes and sad the land that needs one like this.