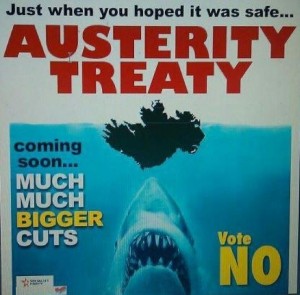 The vote in favour of the Austerity Treaty is clear.  At 60 per cent Yes against 40 per cent No there is no room for doubt.  It is a decisive endorsement of government policy and a mandate for further cuts and tax increases.  The result should not have been unexpected given the political forces ranged in support of the Treaty, the support of big and small business, the failure of the trade union movement to oppose it and the inevitable support of the mass media.  In the general election last year the Irish people voted by a large majority for a new government in no important way different from the previous one and with no claim to pursue significantly different policies.

The result is nevertheless disappointing.    Austerity isn’t popular despite the vote and never will be.  Even the Yes campaign was under instructions not to celebrate its victory.  Austerity is a reality because of an economic crisis which most people still believe was the fault of bankers and property developers.  In October last year when the Austerity Treaty was originally being negotiated an opinion poll recorded 63 per cent opposed to it with only 37 per cent supporting.  Quite simply many changed their minds.  Why?

Many voting Yes did so reluctantly while many will have wanted to vote No but didn’t vote or even voted Yes.  The low turnout of 50 per cent reflected all this.  Yet the vote was decisive.

The No campaign was successful in challenging the failure of austerity and pointing out that such a policy across Europe would only lead to continued stagnation.  Ironically it was more successful than it deserved to be because from a Marxist point of view it is by no means clear that austerity always and everywhere will fail, if by this we mean failure to return a particular economy to growth.  Austerity, as the leaders of Germany understand it, is simply the state policy that enforces the normal disciplines of the market by cutting costs and devaluing capital so that the rate of profit is increased, accumulation of capital through investment and new business creation is encouraged and economic growth returns.

Socialists oppose austerity not because it might or might not return the economic system to this position but because renewed growth rests on increased exploitation of the working class and posits continuation of a capitalist system that will accumulate and grow until the next crisis. Unfortunately we are not yet in a situation where the debate can be framed in terms of a choice of alternative systems but one which only asks the best way to help the existing one.

The Keynesian alternative of increased government spending, summed up by the call for ‘growth’, has long captured the trade union movement and what passes for left politics.  On the other hand there is ignorance of the alternative Marxist perspective and difficulty in arguing for it because of our weakness. We are also not agnostic as to which side of this capitalist debate wins. This means that excavating and pushing for a genuine alternative is not easy.  The first lesson of the campaign however is that there has been a failure of the Keynesian alternative to convince, for it was predominantly under this banner that the No campaign was fought.

Ironically one reason it failed is that, being no real alternative, it was so easily appropriated by the Yes campaign who blithely announced they were working on their own growth agenda.  Being in government they are also the only ones in a position to do anything about it. Again the idea that the capitalist state should be called upon to solve a capitalist crisis is not one with which Marxists could agree.   This is particularly true of the Irish state.  Indeed the very idea that our notoriously venal and incompetent state, so implicated in facilitating the crisis, was itself the mechanism of salvation was obviously questionable.  Even the odd interviewer could not resist pointing this out.  Doubly ironic that this argument was employed by mainstream media figures in calling into question the claims of left wing No campaigners.

In terms of the campaign therefore the criticisms of austerity were blunted by the governing parties’ claims that they too were working for a growth agenda.  More importantly the need for austerity seemed inevitable because there is a huge debt, which is growing and it is going to have to be repaid.  In the meantime the Yes side told us we needed to borrow to pay for state services and we needed to borrow from those states which are telling us to impose the Treaty.  The latter would not take kindly to us saying no to their Treaty while asking for another loan.  While the No side rejected the argument that we would be unable to borrow if the Treaty was rejected the Yes side countered by saying – why take the chance?   If you heard once about needing a safety net you heard it a hundred times.

It is widely accepted that the threat that the Irish State would not be able to borrow, or only at much higher rates, introduced the fear factor that triumphed.  On this issue the weakness of the Irish state, faced with the EU and IMF, was exposed.  The Irish people have had a couple of years to get accustomed to their subordination to the major European powers and decades of acceptance of subordinating policy to the needs of US multinationals.  Any alternative based on the Irish State going in an alternative direction, one that questioned these arrangements, appeared implausible.

The second lesson is very like the first. An alternative based on the Irish state challenging the big European powers or the IMF proved unconvincing because it lacks credibility.  The campaign proved this.  Blaming workers for being afraid when this is the real situation is therefore missing the target.

The No campaign was always on the back foot.  By saying it was not necessary to approve the Treaty for the State to borrow, when this borrowing has to be repaid, it simply reminded voters of the argument that austerity was necessary.

Only two alternatives were weakly argued for in the No campaign.  The first is that the debt should be defaulted on, simply not paid back.  Secondly that the rich who caused the crisis or who have largely escaped its consequences should be taxed so that both these wrongs are righted. These arguments simply didn’t feature largely enough and I will look at just whether they are powerful and robust anyway in future posts.

In the last analysis we have had a referendum on the consequences of a systematic crisis of the capitalist economy and the referendum has told us that unfortunately the working class does not yet have an alternative.  This lesson is inescapable.  Since the socialist alternative is the actions of the working class itself, if this class is too fearful to challenge the system then by definition no alternative currently exists. The Keynesian alternative that marked the No campaign proved unpersuasive.  The capitalist alternative did not convince.  At least on this score Marxists can be at one with the majority of workers.  We can begin to exploit this agreement by putting our own criticism to counter the right and challenge the left that currently dominates what exists of a working class movement.

We can also take heart that many workers, despite no real alternative being presented and being unable to begin creating one for themselves, still decided to either vote No or abstain.  The No vote was overwhelmingly a working class one.  The 20 per cent who voted No are not however anywhere near either a majority of workers nor of the majority of society on which a socialist alternative must rest. Nor can it be claimed that the 30 per cent who voted yes are middle class and can be ignored.  What the media calls middle class is more often than not better paid workers who see themselves as having something to lose by challenging the status quo.

If fear triumphed it is not because workers are congenitally cowardly.  Fear is a rational response to relying on others for protection when these others – the governing parties, state bureaucracy and foreign institutions are all so wedded to austerity.

Confidence on the other hand means confidence in ourselves and the alternative only we can create.  It means to stop looking to others for answers, especially to parties that are committed to austerity, to a state that led us into the crisis and international bureaucracies that everywhere and at all times seek to impose austerity and protect the banks.

Many workers took what action they could and protested by voting No.  Protest is only the beginning of an alternative but it is a beginning.