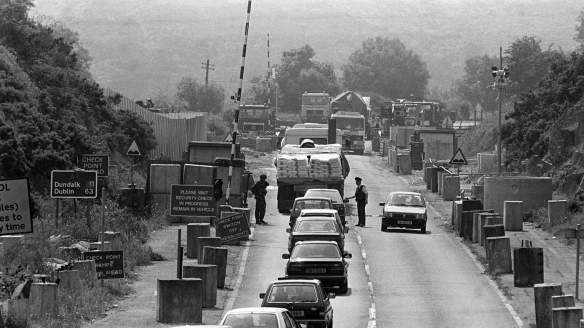 The British parliament has voted for a no deal Brexit through the Tory demand that the backstop, that would prevent a hard border inside Ireland, should be removed.  Theresa May has gone to Europe (again) and been told the Withdrawal Agreement will not be re-opened for negotiation.  Her humiliation (again) was partially avoided by attention switching to Donald Tusk’s remark about a special place in hell for those who led Brexit without a plan.

Theresa May continues to kick the can down the road in an attempt to blackmail MPs into supporting her deal as the only way to avoid a no deal exit.  The alternative is an extension of Article 50 to postpone the dreaded decision.

But lo and behold, here then comes Jeremy Corbyn to overturn his demand that the Withdrawal Agreement pass his six tests and instead he demands five tests from the Political Declaration. Since this declaration has no legal force it is purely a political document, which doesn’t make it unimportant but does mean it can contain all sorts of pious wishes and contradictory or impossible elements that could in large part contain what Corbyn has said he wants.  Less charitably it’s not binding and not worth the paper it’s written on.

This may have three effects. It gets May’s deal over the line and we have Brexit.  It makes the Tory deal the basis of this Brexit and it makes them responsible for whatever ensues – as in British business continuing to shift to the rest of Europe that remains part of the EU.  A fourth effect is that Corbyn is seen to be consistent in his demand for a ‘jobs’ Brexit while also sticking to Labour Party policy.

Of course, only one of these is true – the most important one – that Brexit happens.  Corbyn having facilitated Brexit will also own it, and will not be seen to have put into effect what the majority of Labour members thought they were getting from the party’s conference resolution.

In one sense, in supporting the May deal, Corbyn can claim consistency, since both he and May have claimed benefits for Brexit that do not exist; and both have tried to ignore the wishes of the majority of the members of their respective parties.  Left supporters of Brexit claim that such a deal will split the Tories but they ignore the parallel process in the Labour Party.

To hide their complicity in this Tory project the left Brexiteers now regularly claim it doesn’t really matter because Brexit isn’t that important – we shouldn’t get that worked up about it, and really we shouldn’t take sides.  But if there’s one argument that really gets my goat it is this one – having voted for Brexit and a Tory initiative they are trying to cover their tracks.  Their argument is not only bogus but thoroughly dishonest.  Like the right-wing supporters of Brexit the project can only get by on lies, and it doesn’t matter who is telling them, for what purpose or with what motivation.

Corbyn is in the process of betraying the membership in a disregard for their views that equals that of Tony Blair, from whom he was supposed to be so different.  The only hope here is that May does not feel able to get her deal through her party with Labour support and/or the ranks of the Labour Party rise up to prevent the biggest betrayal yet, as they did with the leadership attempt to abstain on Tory immigration plans.

It is not therefore exluded that no deal will happen.

This has provoked the charge that the Tories are effectively tearing up the Good Friday Agreement (GFA). This is sometimes followed by the forecast that this will lead to a vote for a united Ireland on the basis that the majority in the North of Ireland supported and continue to support remaining in the EU.

I don’t believe this to be true.

First, it’s debateable whether a no deal Brexit would amount to tearing up the Good Friday Agreement, either legally or in spirit.

If we take the legal position first, the UK Supreme Court in 2017 stated that the GFA ‘assumed’ but did not ‘require” UK membership of the EU.  Legal academics have claimed that the GFA requires citizens’ rights in the North, and human rights in particular, to be equivalent with the Irish State, but the GFA does not require the UK to be a member of EU’s human rights institutions or signed up to its standards. The GFA contains provisions for establishment of a Northern Ireland Bill of Rights but that’s a dead letter as is the provision for a civic forum.  The North does not have women’s reproductive rights and nor is there the right to gay marriage, unlike the South, but no one is saying that the GFA is therefore dead.

The Common Travel Area will be put under strain by a hard Brexit as EU migrants freely entering through Dublin may be able to cross the border, if that border is ‘soft’, and then travel on to Britain with few checks if there is also no ‘border’ between the island of Ireland and Britain.

Since the main rationale for Brexit was control and reduction of immigration, and its introduction will embolden sundry reactionaries on this score, this will put pressure on to put a border somewhere.  The alternative would be a ‘hostile environment’ inside Britain (and also perhaps Northern Ireland) where daily transactions and activities are used in order to check people’s citizenship status, and we know that the Tories do hostile environments very well.

But these options too may not legally breach the GFA.  So what about its spirit?  Well, this very much depends on what you think the spirit of the GFA is and whether Brexit breaches it.  If you think it was a pacification process that is inherently sectarian then Brexit is hardly going to get you to complain that the GFA’s ‘spirit’ is threatened. What its spirit actually is has been demonstrated in practice, which means you have to ignore the unthinking rhetoric of the great and the good and look at how it has actually worked.

The Agreement has already been mangled and its centrepiece, the Stormont Assembly, has been suspended five times and has currently been suspended for over two years. Other parts of the Agreement, such as the British-Irish Intergovernmental Conference, hardly exist. Much of the waffle composed of promises relating to good faith, non-discrimination, equality, propriety and accountability with public funds, transparency etc. are thoroughly discredited by the reality of an incompetent, corrupt and sectarian Stormont administration.

The DUP never supported the GFA, so it can be no surprise it isn’t working.  Sinn Fein clung on to Stormont up to its most recent suspension until it became clear its voters would no longer tolerate the humiliation involved. They then rejected the party’s idea of a new deal.  The GFA isn’t working so it’s debateable that Brexit preventing it working makes any practical difference.

It has been pointed out that the EU had little to do with the creation of the Agreement and that, for example, the US had a more significant input.  The Agreement itself does not rely on it and the EU is not a party to it.

The letter of the Agreement states that the British and Irish Governments wish “to develop still further the unique relationship between their peoples and the close co-operation between their countries as friendly neighbours and as partners in the European Union.” There is much about cross-border cooperation on a number of fronts, including agriculture, tourism and health etc. that will all be undermined by a no deal Brexit, but there is nothing that legally invalidates it.

So the first part of the argument would appear not to hold; although it is not quite that simple.