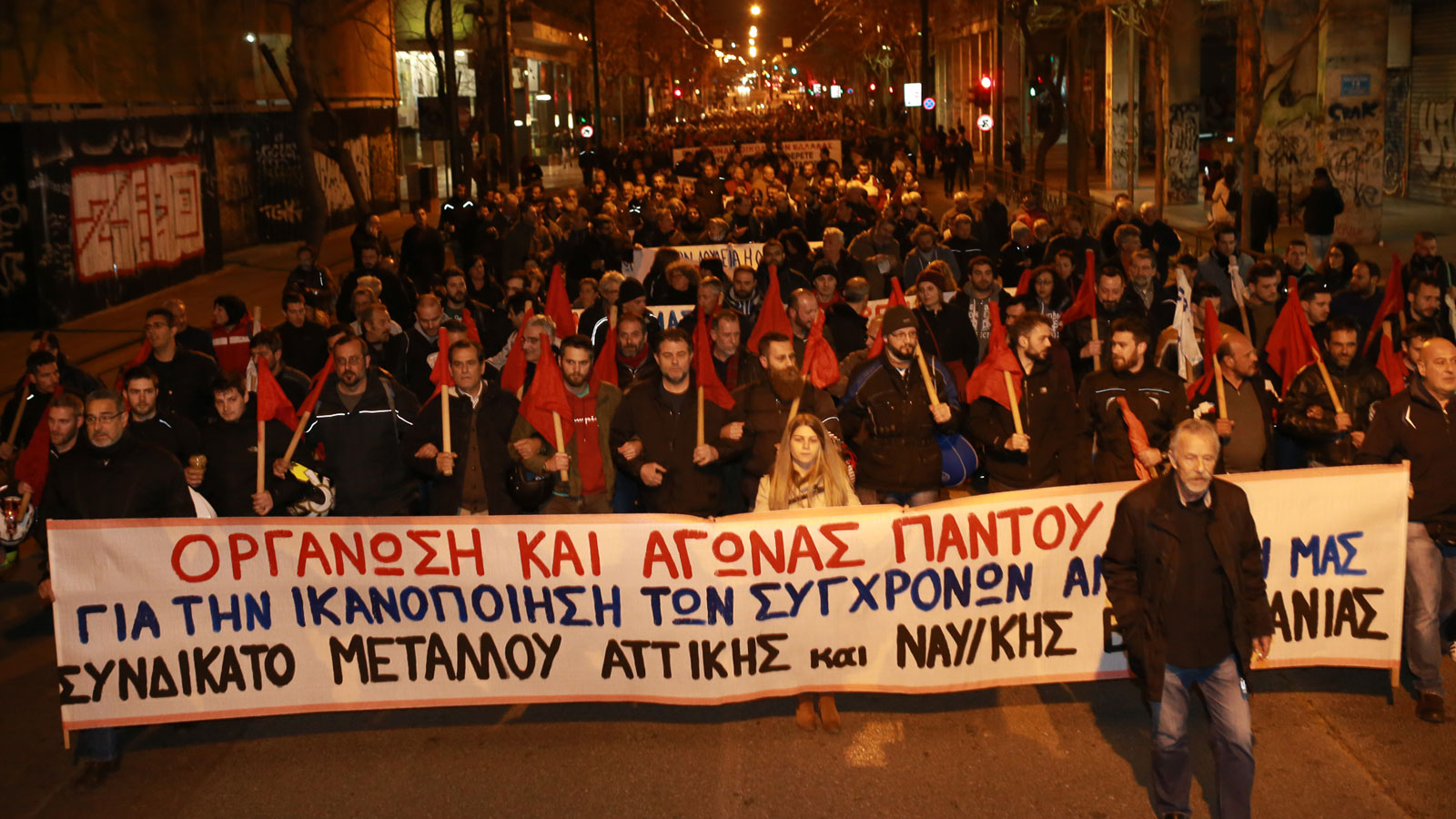 A common reference point in the debate on the way forward in the fight against austerity in Greece was the idea of a workers’ government as a bridge not only to defeating austerity but also to a “rupture” with capitalism.

“So our approach to Syriza and the governmental question in 2012 was not an illusion, a hope, but an analysis of the importance of the issue and the need for concrete policy answers. This is a fairly standard approach for revolutionary Marxists.”

“Finally the conquest of the government, within a parliamentary framework, can, in exceptional circumstances, be a first step on the path to an anticapitalist rupture but, there too, this can be confirmed only if one government anti-austerity creates the conditions for a new power being pressed on Popular Assemblies, in the companies, the districts and the cities.”

The Greek FI section did not disagree with such a perspective in principle, but considered that a Syriza Government could not play this role:

“In this situation, the motto “workers’ government” becomes relevant. It is not applicable at once: it is even difficult to imagine its possible composition in the present situation. Nonetheless, it is indispensable to propose an overall political solution and to start to developing an understandable answer to the question: “who must hold power in Greece?”

“Such a workers’ government would have to put into practice a program against the crisis, would have to be ready to apply with key transitional measures, such as the socialization of banks and strategic sectors of the economy. A government resting on a general mobilization of the workers and based on their self-organization. A government that would regroup all forces ready to defend the masses’ demands. The revolutionaries would be ready to participate in such a government with other forces on the basis of a confrontational program and of a high degree of workers’ and youth’s mobilization. Because such a government would encourage the possibility for the workers to seize power themselves.”

“Under the present circumstances, and given the character of Syriza, a Syriza-government would not be something more than a mere left parliamentary combination, which is not the same as a workers’ government.” (For a program of confrontation with capitalism, for an independent anticapitalist and revolutionary party, 16 June 2012, by  Manos Skoufoglou.

The common pedigree of this perspective of both the FI majority and Greek section is the debate on a workers and farmers government that took place in the Third and Fourth Internationals.  I have already pointed to the incongruity of a perspective that involves “the conquest of the government, within a parliamentary framework, [that] can, in exceptional circumstances, be a first step on the path to an anticapitalist rupture” while also being considered “a fairly standard approach for revolutionary Marxists.”

I have also argued that the view that a left government could implement anti-capitalist policies and transitional measures that lead the overthrow of capitalism is mistaken.  Mistaken, not only because it confuses governmental office with state power, but also because of the idea that the capitalist state could be used as an instrument for transitional measures that entail the overthrow of capitalism.  It is fundamentally mistaken because it implies that the steps really necessary for socialism, such as workers’ ownership and control of production, can be contracted to the state who may then sub-contract them back to the working class.

For a genuine workers’ revolution it is not a question of mass mobilisation pressuring a left government, and the capitalist state it sits on top, to meet workers’ demands, including demands for economic control, but that workers have already substantially established ownership and control, or are in a position to make such ownership and control general. In such circumstances, workers are not reliant on the capitalist state giving them anything.

A common problem recognised in the perspective of relying, to greater or lesser extent, on a left or workers’ government to lead working class emancipation, is how to distinguish what might be called a workers’ and farmers government, considered as a means to implement ‘transitional’ measures, and left reformist governments which makes reforms valuable to workers and their interests but which will go no further than administering capitalism.

This problem also involves governments that concentrate power in the state, and take what can be considered ‘anti-imperialist’ measures against foreign interests, and even measures against certain domestic private capitalist concerns, but which again do not ultimately destroy capitalism or its state, and certainly do not promote workers power through working class ownership and control.

When a ‘standard’ strategy relies on the initiative coming from, and being determined by, a left government, it not only becomes a problem for analysis but also a problem for intervention.

That there will be political crises that will throw up occasions when the left will form an electoral majority and then take office does not make this the standard Marxist approach to the achievement of socialism.

A much better orientation in such circumstances comes from the pen of Engels:

“The worst thing that can befall a leader of an extreme party is to be compelled to take over a government in an epoch when the movement is not yet ripe for the domination of the class which he represents and for the realisation of the measures which that domination would imply.

What to do, what his party demands of him, again depends not upon him, or upon the degree of development of the class struggle and its conditions. He is bound to his doctrines and the demands hitherto propounded which do not emanate from the interrelations of the social classes at a given moment, or from the more or less accidental level of relations of production and means of communication, but from his more or less penetrating insight into the general result of the social and political movement.

Whoever puts himself in this awkward position is irrevocably lost. We have seen examples of this in recent times. We need only be reminded of the position taken in the last French provisional government by the representatives of the proletariat, though they represented only a very low level of proletarian development.

Whoever can still look forward to official positions after having become familiar with the experiences of the February government — not to speak of our own noble German provisional governments and imperial regencies — is either foolish beyond measure, or at best pays only lip service to the extreme revolutionary party.”

Not a million miles away from Syriza and Greece.