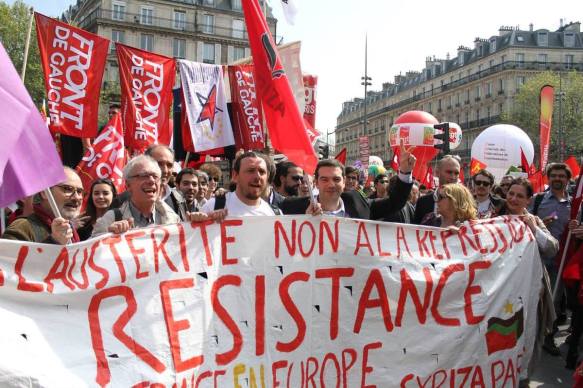 The perspective of the FI majority in the fight against austerity was based on “the importance of forming a government to the left of Social Democracy in the next election for workers in Greece and throughout Europe. The arrival of such a government could increase their self-confidence and contribute, under certain circumstances, to a new rise in struggles.”

However the FI majority reject any charge of their having illusions in Syriza, because they called for a government that included the Greek Communist Party (KKE) and the anti-capitalist Antarsya, which included the Greek section of the FI.  It absolves itself of responsibility for the Syriza betrayal and its demoralising impact because it was only “under certain circumstances” that “such a government could increase their self-confidence and contribute . . . to a new rise in struggles.”

Neither of these disavowals is very convincing, since it supported the Syriza government regardless of whether it included the KKE and Antarsya, and it supported it under the circumstances given at the time and not “under certain circumstances.”

The starting point of their perspective appears to be twofold, the first being that “the question that we were continually posing was the unity of the radical left”:

“The challenge is clear and decisive: it is necessary to defeat the Greek right and far right and to do everything so that the Greek left, of which Syriza is the main component, wins these elections, in order to create a social and political dynamic for a left government, which must strive to bring together all the forces ready to break with the austerity policy . . .  This government must be a government of the lefts . . . “

The second started from “trying to put forward a comprehensive political response that went beyond propaganda in a situation where the movement was raising the question of a political response and our positions obviously corresponded to positions in the Greek radical left.”

For the FI majority this left government would have ‘’to take anticapitalist measures, of incursion into capitalist property, nationalization of the banks, and certain key sectors of the economy, reorganization of the economy to satisfy elementary social needs. To impose these solutions, social mobilization, workers’ control, self-organization and social self-management are essential. Finally the conquest of the government, within a parliamentary framework, can, in exceptional circumstances, be a first step on the path to an anticapitalist rupture but, there too, this can be confirmed only if government anti-austerity creates the conditions for a new power being pressed on Popular Assemblies, in the companies, the districts and the cities.”

It is ironic that the FI majority dismisses the alternative of the Greek section because the self-organisation it depended on was “limited and marginal’, yet its own perspective depended on “social mobilization, workers’ control, self-organization and social self-management [which] are essential” in order “to impose these solutions.”

In other words, under the existing circumstances, and given the steadfast opposition of the EU etc., the perspective of the FI majority could not succeed, even in its own terms. Not unless it expected Syriza to whip up mass self-organisation, and with a view to seeking to challenge the Greek capitalist state in a situation of dual power.

But to have believed this really would have been to betray the illusions in Syriza that they are keen to deny.

The FI majority claim that the Greek section itself endorsed such an approach, and it records an article by one of its members which said that in the “situation in Greece, the watchword of workers’ government is becoming relevant. It is obviously not applicable now: it is even difficult to predict at the present time the possible composition. Such a government should be able to implement an emergency program to fight the crisis, ready to implement key transition measures, for example by expropriating banks and other sectors of the economy.”

But what this shows is that the Greek section considered this perspective and rejected it.  Unfortunately, it also shows the illusions that both the Greek section and the FI majority have in such a perspective.  And this is important because the FI majority are correct when it says “our approach to Syriza and the governmental question in 2012 was not an illusion, a hope, but an analysis of the importance of the issue and the need for concrete policy answers. This is a fairly standard approach for revolutionary Marxists.”

It is my argument that this “standard approach” is wrong.  Both opposition and FI majority betrayed illusions in the potential of the state to carry out revolutionary anti-capitalist measures, which only the working class has an interest and capacity to perform.

The Greek section stated that a workers’ government “should be able to implement an emergency program to fight the crisis, ready to implement key transition measures, for example by expropriating banks and other sectors of the economy.”

For the FI majority the crisis required “the implementation of transitional demands” and the left government would have ‘’to take anticapitalist measures, of incursion into capitalist property, nationalization of the banks, and certain key sectors of the economy, reorganization of the economy to satisfy elementary social needs. . . .  Finally the conquest of the government, within a parliamentary framework, can, in exceptional circumstances, be a first step on the path to an anticapitalist rupture but, there too, this can be confirmed only if government anti-austerity creates the conditions for a new power being pressed on Popular Assemblies, in the companies, the districts and the cities.”

As we can see, both perspectives required the self-organisation and mass mobilisation of the working class, when these were not of sufficient breadth or strength to make their perspectives viable.  And while both assign different weights to such a requirement, both assign a role to a left/workers’ government that glosses over the reality that such a government would sit on top of a capitalist state, and a capitalist state is not going to “take anti-capitalist measures”, in the words of the FI majority, or “implement key transition measures” in the words of the opposition.

In both perspectives it is clear that a workers’ government would play a leading role in what would be, as the FI majority note, “exceptional circumstances”, circumstances which somehow however become the basis for “a fairly standard approach for revolutionary Marxists”.

What should bethe standard approach involves recognition that the capitalist state, workers’ government or not, cannot be the mechanism for workers’ self-emancipation or even the overthrow of capitalism.  Electoral considerations are important but entirely secondary to the development of working class power and its eventual overthrow of capitalism, to be replaced by what used to be called the dictatorship of the proletariat.

None of this means that it is impermissible not to call for a vote for reformist parties or not to call on them to form a government, or to make demands on them to protect and advance workers’ interests.  It does not prevent Marxists defending such governments when attacked from the right, if this too is necessary to defend workers interests and their self-organisation. But this is a world away from seeking to make a left/workers’ government the lynchpin of the overthrow of capitalism and introduction of working class rule.

This “standard approach” has been informed by the debate inside the Third and Fourth Internationals on Workers’ and Workers’ and Farmers Governments, and I will briefly discuss this in the next and final post.

In the meantime, nothing I have said automatically precludes supporting a vote for Antarsya, or on the other hand, supporting the fight for a Syriza Government.  Neither does it mean that both are principles to be defended in all cases.  So, it may be correct to have voted for Syriza or to vote against it when it imposes austerity.  These are mostly questions of tactics and are in general determined by what will advance the self-organisation and consciousness of the working class and its opposition to capitalism and its state.

What the views above do reject is what the opposition describes as “the main conclusion” of the Greek experience, which, it says, is “the need for political and organizational independence from reformism”.

There is however no absolute requirement to be organisationally independent or separate from reformist organisations.  The following view of the opposition must therefore be rejected:

“A very old and dogmatic concept was repeated here: revolutionaries should stand alongside the working class in labour parties so as to gain their trust, and be ready to lead them out of those parties when the leadership betrays them . . “

What is dogmatic is to rule out that “revolutionaries should stand alongside the working class in labour parties.”  As I argued in a previous post, it is necessary always to stand beside the mass of the working class, whether in reformist labour parties or not.  Only in this way can Marxists play a role in the organisation of the workers within them, and the process of their becoming more than reformist.

Whether this meant being inside Syriza or not is not a question I can answer, and again is a tactical one.  But what I can say, is that if the decision whether or not to do so was based on the mistaken view above, there can be no confidence that the decision reached on this choice was the right one.