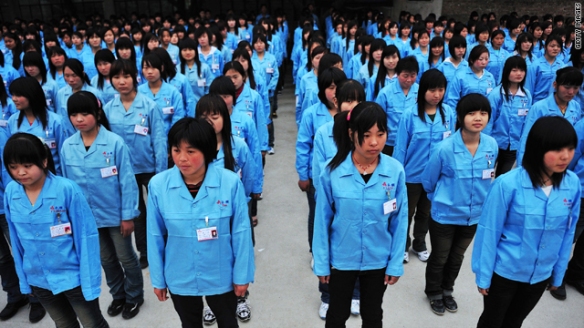 The continued growth in the productive powers of society can only mean the increased productive power of human labour, exercised through increasing use of the implements of labour and the organisation and application of scientific knowledge.  This in turn can only manifest itself in the growth of the working class that exercises this power, wields the implements of labour and develops and applies advances in scientific knowledge.

The result has been the increasing creation of the material conditions that can provide the foundations for a more equitable and socially just society.  The most important of these is the growth of the global working class.

From 1980 to 2010 the world’s labour force grew by 1.2 billion, to approximately 2.9 billion, with almost 90 per cent of the growth occurring in what has been called developing countries, including 500 million in China and India.  In the process 620 million people have been lifted out of poverty, as defined by the World Bank at $1.25 per day (at 2005 purchasing power parity).  Global non-farm employment rose from 54 per cent of all jobs in 1980 to 70 per cent in 2010.

From 1990 to 2010 China’s productivity was estimated to have grown by an average of 9.8 per cent per year, about one fifth as a result of the move from countryside to the city.   Wages grew as a result, and the ‘Financial Times’ has recently reported that the scope for this mass migration to continue had now ended.  (All figures from McKinsey)

In what are called the advanced economies 165 million new non-farm jobs were created and a large number of these taken by women joining the workforce.  Over this period the number of women in the labour force rose by 77 million accounting for the majority, 61 per cent, of the net new additions of 122 million.

Average skill levels of the workforce have also risen with the number of college graduates in the world labour force doubling in the economically advanced countries and growing by two and a half times in developing countries.  Around 700 million high school graduates joined the world’s labour force, increasing the proportion of those with secondary education to 48 per cent in 2010 from 39 per cent in 1980.

The assumption that only the ‘advanced’ countries have educated workers with the knowledge and skills necessary for innovation and more advanced production is now untrue.  In 1970 approximately 30 per cent of university enrolments were in the United States but by 2006 this was only around 12 per cent. The share of the world’s Ph.D.’s accounted for by the US has fallen from around 50 per cent in the early 1970s to 18 per cent in 2004.  By 2005 South Korea was sending a larger proportion of its young people to university than the US. And, for example, only 10 per cent of Italy’s working age population had a college degree in 2010, lower than in Malaysia, Thailand and the Philippines.  Countries such as Indonesia, Brazil, Peru and Poland more than doubled their university enrolments in the 1980s and 1990s. (Quoted from ‘The new global labour market’)

The McKinsey report quoted above states that in the advanced countries the share of national income going to labour rose during the 1950s and 1960s, peaking in 1975, but has fallen ever since and is now below its 1950 level.  The wages of less skilled workers have stagnated or fallen in all but a handful of advanced countries while the incomes of those in the top 10 per cent have risen.  Capitalists complain that they cannot get the necessary skilled workers and unemployment among those with only secondary education is nearly twice as high as among those with college degrees.  In the advanced countries unemployment among the least skilled is two to four times higher than the most highly skilled.

As illustration of the insanity of capitalism’s failure to develop in any sort of rational manner, an article in the ‘Irish Times’ earlier this year notes that the Irish State has the dubious distinction of having the most overeducated workforce in Europe with around a third overqualified for the jobs that they do, just in front of Cyprus, Spain and Greece.  It reports one young woman with a degree and a Diploma in primary school teaching who made 80 job applications last year and didn’t get one interview.  As the duration of unemployment grows the skills previously acquired atrophy and the social labour expended on their acquisition is wasted.

So some educated workers can’t get a job commensurate with their education while capitalists complain they can’t get skilled workers.  A further twist is added when you consider the well paid jobs that some workers get have relatively little to do with their accumulated knowledge.

I recall reading some time ago an article in a British newspaper that noted that the knowledge and skills of those with science qualifications is socially wasted in jobs within the media industry, in companies like Google or Facebook, doing jobs that involved not much more than high-tech advertising and selling.  I know of one young woman who has a PhD. in science, in which she studied the transfer of drugs through the body for those with cystic fibrosis but who could only get a decent wage by requalifying as an accountant.

When production is profit driven, without any conscious societal mechanisms to determine social priorities, such waste appears in statistics as remarkable progress.  What isn’t measured is the potential contribution that millions of working people could make but can’t because of the lack of opportunities and subordination and lack of democracy in the workplace that stifles their ambition and creative powers.

Despite all this however it has to be understood that capitalism continues to develop, and the productive power of humanity continues to grow massively.  The need for skilled workers grows even if the system often wastes much of the knowledge and skills created.

There can be no doubt that the ‘civilising mission’ of capitalism, which the last few of these posts have been about, continues.  Of course it does not develop evenly and does not develop without antagonism or contradiction and in the next posts I will look some more at the limited and contradictory character of this development.

However if capitalism were simply as system in crisis we could not explain why it still exists.  If it were not still revolutionising the means of production and developing the productivity of labour it would no longer be the capitalism analysed by Marx and we would have to find some other approach to understanding it.

Most important of all, as I have said before: if capitalism created only oppressed, exploited and alienated human beings where could the alternative come from?