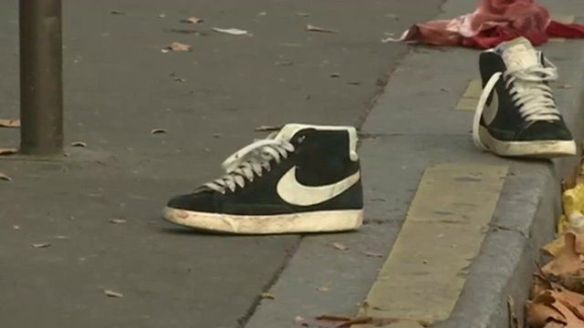 One expression of the dogmatic campaign that has followed the terrorist attacks in Paris is the near hysterical reaction of politicians and media in Britain to Jeremy Corbyn’s reply to a question on support for a police shoot-to-kill policy, that he ‘would not be happy with it’.

This has evoked an opportunist and cynical moral outrage that seeks to marginalise opposition to repressive measures by making everyone feel that, of course, the very idea of opposition to such an idea is crazy.  Yet when you look at the question asked, Jeremy Corbyn would have had to be crazy to answer it in any other way – ‘would you be happy to order the police to shot to kill.’

So a politician orders the police to adopt a shoot-to-kill policy, a licence-to-kill, that, if it were to mean anything other than incoherent frothing at the mouth, would mean rewriting the law by simply ignoring it.

All obviously in the course of defending our liberties and the rule of law.  Giving the police the prior authority to kill in advance ‘of split-second decisions’ (what a contradiction that is for a start) is held up as defence of western civilisation.

Has the name of John Charles de Menezes slipped from everyone’s memory already?  Isn’t it revealing that the same BBC that only five months ago was reporting the tenth anniversary of his murder are demanding  that just such an approach to policing is made the benchmark of a rational response to terrorism. Have the police ever shown any reluctance before to do anything other than shoot-first-ask-questions-later?  How many are languishing in jail for having murdered innocent people?

The great British liberal establishment once again demonstrates every criticism made of its hypocritical self-righteous arrogance to be completely true.  These liberals will wrestle with their conscience and their conscience will lose.  They will defend democratic and civil rights, except when they are under attack.  And they will defend our freedom by ridding us of as much of it as they can get away with.

What has been staggering has been the sheer stupidity of some of the contributions to this ‘debate’, a debate in which no one is allowed to present a different opinion.  One can almost still hear the BBC Radio 4 presenter raise his voice to exasperated levels asking why Corbyn didn’t answer a different question from the one he was asked.

We have a Labour MP saying, and I paraphrase: ‘we have bombed Iraq why can’t we bomb Syria – it would be like bombing Hamburg and not Berlin in the Second World War.’

When you bomb a country you are declaring war on it.  (This blog by Boffy explains.)  Not hard to understand but easily proclaimed by the politically hysterical in the safe and secure knowledge that as long as you bare your bloated chest in moral outrage and demand more repressive measures you will be saved the cross examination meted out to Corbyn or, last night, to Ken Livingstone.

So the Radio 4 ‘Today’ programme had some Tory MP and ex-Brit (as we put it in this part of the world) saying that, just like the Prime Minister, we ‘shouldn’t look back’, which was in response to another interviewee pointing out the disastrous consequences of western intervention in the Middle East in the past.  The latter of course is called learning from history, or ‘evidence based policy’ as it might also be called nowadays.

For the educated and discerning liberal, with the memory of a goldfish, there is this article in ‘The Guardian’ which says – yes the west has screwed up the Middle East but (and this is the bit where you need a goldfish memory) Corbyn’s argument is “mangled history without a conclusion, half an argument, the sound of one hand wringing.”

So we begin with this “mangled history”:-

“The charge sheet against western policy dating back a generation is easily drafted. It takes moments to weave a tale of counterproductive geopolitical vandalism, starting from US support for the mujahideen against the Soviets in Afghanistan, via the chaos of post-Saddam Iraq, pausing to condemn blind eyes turned and arms sold to Saudi Arabia, whence the theology of infidel-murder pullulates.”

Only for all this to be simply “selective history that adorns jihadi propaganda” at the end of the short article.

This is not unlike some commentary on the Left which, recognising the thoroughly reactionary nature of Islamic fundamentalism and the attacks in Paris, seeks to deny that these acts are at least partly the result of imperialist intervention; as if this rather obvious fact necessarily lends some little bit of legitimacy to the terrorists’ actions.

So they echo in left phraseology the claim that the Paris attacks were solely motivated by a barbaric and obscurantist religious fanaticism, which at the very most uses western actions as cynical justification.

That it was indeed inspired by the former does not exhaust its motivation or that of those who join it.

With a liberal understanding of politics, of moral absolutes that get applied relatively- depending on the circumstances, but rolled out as absolutes again when it suits, it is easy to see the logic.  (A good article pointing out the hypocrisy is here.)

With a Marxist approach it is not.  Those who seek the development of a working class movement don’t have to think twice about denying anything legitimate in, or any progressive impulse within, movements that would happily destroy any manifestation of socialism in societies they control.

The reason all this is important is not really that we must demand fair and balanced coverage from the BBC.  If you’re waiting, hoping or something like expecting that, you must also be expecting a new ten-part series on massive welfare sponging by a long-established German immigrant family in a palace called Buckingham.

The class bias of the BBC is part of its DNA.  While we can expose it and condemn it and even demand it stop, the answer does not lie in expecting this to happen.  Its blatantly biased treatment of Corbyn will become a vaccine to more and more people, and will prove to be the case when the British labour movement builds its own mass media to counter the BBC and the gutter press who manufacture many of the stories it regurgitates.

The real importance of this analysis is the fact that the state that is the author of  the ‘mangled history’ is now presented as our only protector against unmerciful violence.  And the working class movement is in no position to present an immediate and live means of defence as an alternative.

An armed mass labour movement does not exist and will not forseeably for some time so our alternative means of defence starts with political argument.  And prime among these is a fact already apparent to many, that western imperialist intervention in the Arab region has fertilised the soil of Islamic fundamentalism and must share responsibility for the monster it has both directly and indirectly created.

To expect this imperialist state to place the needs of working people above its own needs is a political innocence that needs to be shaken off and renounced.

To win an argument that working people cannot rely on the armed forces of the state never mind agree it be allowed vastly increased powers is a difficult one where we are under direct threat and direct attack.  We should therefore not accept its exculpation of its own sins on the basis that we must simply damn the reactionary terrorists.  The depths of this terrorist reaction is testified not only by the barbarity of the attacks on ordinary working people but by their objective of seeking to make all of us part of the undifferentiated ranks of western decadence and aggression.

This is not the West that really exists just as Islamic fundamentalism is not the Arab world that exists.  There is a unity between the peoples of both that stands separate and above the alliance of western imperialists and reactionary rulers of the Arab peoples.

However far away this might now seem there will be no justice for those murdered through surrendering our own freedoms and cheering the imperialist acts of violence that brought us to where we now seek to escape from.

2 thoughts on “Fighting terrorism after Paris”