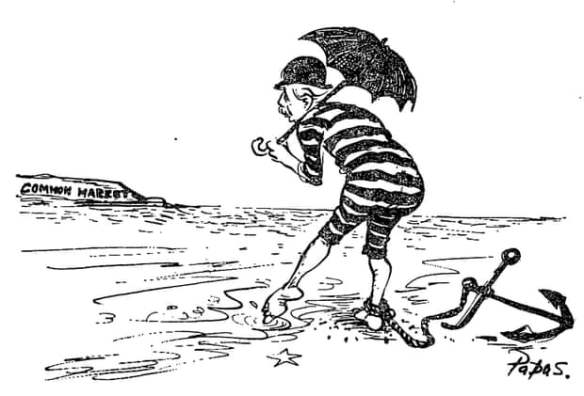 Within minutes of the announcement that the negotiations between the EU Commission and Britain would continue the Labour Party put out a statement calling for Brexit to get done, plus supporting a deal so that we could all ‘move on’.  There was no sign of Starmer’s six tests for a Brexit that Labour could support because this would mean not supporting any deal.

So, the statement was one part opportunism and one part aping Boris Johnson’s “get Brexit done”.  The most stupid however was the idea that once there is a deal, any deal, we can all “move on”.

In 1957 the British Prime Minister Harold Macmillan sought to pre-empt creation of the European Economic Community by proposing a wider free trade area that would encompass the six would-be members of the EEC.  The six however had already committed while the British appeared to want to have their cake and eat it: gain a free trade area for its industrial goods in the rest of Europe while continuing its current arrangements with its old Empire, especially in relation to food.  For the prospective members of the EEC the British proposal appeared to threaten political ambitions for the new European organisation while France in particular saw it as a British attempt to take leadership.

When this British attempt failed it went ahead with creation of a separate European Free Trade Association (EFTA) that included Austria, Denmark, Norway, Portugal, Sweden and Switzerland, setting its launch date for May 1960.  When the EEC members accelerated plans for cutting tariffs in the same month EFTA, in an effort to keep up, followed suit with its own programme of cuts the following February.  An earlier example of the exercise of sovereignty and the ‘ratchet effect’ so objectionable to the British now.

Just over a year later Britain demonstrated its commitment to its new EFTA allies and announced it was applying to join the EEC.  It did this for many reasons, including that EFTA was too small, that the countries of the dying Empire were going to go their own way, and that the US supported West European unity, meaning that EFTA could never rival the EEC.

Joining it, according to Macmillan in 1961, was necessary not only to boost relatively poor economic performance but “to preserve the power and strength of Britain in the world.”  Showing its continuing devotion to its EFTA allies it unilaterally imposed a 15% surcharge on imports from EFTA members in 1964, making them in some ways worse off than the US.

Today Britain is on its own.  It will not be putting together an alliance of several other European states to rival the EU when it doesn’t even have the weight to compel direct negotiations with the two largest EU states, Germany and France.  Instead of such a coalition it trumpets an exit on “Australian” terms, which is a euphemism for no deal but has the merit of showing how isolated it is.

So, Britain sought EEC membership again and applied to join in May 1967.  Six months later France vetoed the application.    In June 1970 the EEC opened negotiations and in January 1973 the UK was admitted to membership.  There was no position for Britain outside it that remotely cohered with its view of its role in the world.

This is even more the case now when its relative power has continued to wane and will suffer a downward step change as it leaves, regardless of the post-imperial bluster that has gone off the scale.  When the Royal Navy boasts of four small boats defending British sovereignty you should know you’re in trouble.  As a nuclear power it awaits a decision on whether the US is going to go ahead with a missile system Britain depends upon for its ‘deterrent’.

Having rejected membership of the Single Market, even were the EU to agree to it, any deal that is now negotiated will be a ‘thin’ one.  In other words, it will address tariff barriers which average about 3 percent while leaving intact non-tariff barriers that are in the order of 20 percent.  Such barriers threaten the existence of whole industries, including motor manufacture, and many others that require EU approvals such as chemicals and aerospace.  Electricity interconnection with France and Ireland requires adoption of EU harmonised trading rules.  Not mutually accepted rules, not equivalent rules, but exactly the same rules.

The British have resiled against the necessity to align its rules with any development of those of the Single Market.  Why should it change its rules just because the EU changes theirs?  As we have seen, we have been somewhere like this before.

Were the British proposals to be accepted, and their rules to remain unchanged while the EU developed its own rulebook, the rules set by the EU would no longer govern entry into the Single Market.  Britain would have access without having to follow the same rules as member states.  In order to prevent this the EU would have to put on the brakes to take account of the European power that has assumed the strategy of preventing European unity for centuries.  The alternative would be to open itself up to other countries seeking the same privilege as the British.  Neither of these is going to happen.

So, we witness the issue of Fish remaining prominent as a way of allowing Britain to declare some sort of victory in a skirmish while surrendering on the main battlefield.

It seems fairly clear, as Denis Staunton from the ‘Irish Times” made clear this morning, that there will be a deal, but that won’t mean Britain can ‘move on’, except in the sense that it goes round another loop of either having to rejoin its European neighbours or sink by itself into an isolation its people will not accept. There is no ‘moving on’.

This means that the strategy of the British Labour Party of supporting Brexit through supporting or abstaining on the deal in Westminster will put it on the wrong side of history and make it joint owner of the disaster.  The referendum and tortured path since have demonstrated again and again that Brexit is toxic.  It will entail untold attacks on the working class, its rights and its standard of living.  The Labour Party should not be looking to be a donkey that blame can be tagged on to.

The division of workers along national lines shows how reactionary Brexit has been by inevitably promoting division within the British working class itself. We can see this through the millions of workers opposed to Brexit and the rise of Scottish nationalism, nurtured by the idea that one variety of British nationalism is somehow qualitatively better than another.  Already in England we see demands for some sort of autonomy for certain regions like the North of England, as if there was a geographical solution to a problem arising from the system that crosses all borders.  It is as if nothing has been learned from the failure of proposing the fix of devolution for Scotland as the solution to austerity and decline.

On the Left, the so-called Trotskyists are saying it could all have been different when it couldn’t; while Stalinists wallow in their own nationalism, in their demand for national sovereignty and their own version of (nativist) identity politics.

The unity of Europe and erosion of national political differences is objectively progressive. It is a task that socialists would themselves seek to accomplish.  That capitalism is doing it only confirms that it can be done in a rightist and conservative manner and that Marx was right to see capitalism as transitional to socialism.  Of course, it is only transitional to socialism if the working class makes it so, but it won’t if it fails to fight for the tasks that capitalism itself has commenced and imposes for its own ends.

2 thoughts on “‘Moving on’ from Brexit”