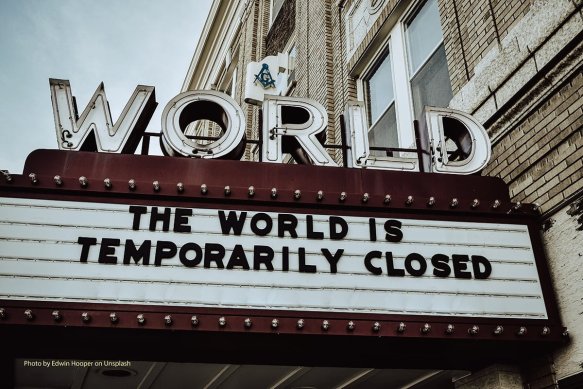 The policy of lockdowns has been approved by many on the left, with the additional argument that they have not been strict enough.  Some appear to believe that pandemic induced crises necessarily open up opportunities for revolutionary crises.  These are considered opportunities to mobilise the working class to resist attacks on its social position and turn it towards socialism.  Crises then become both the necessary and sufficient condition for political revolution.  What these sufficient and necessary conditions might actually be is not considered.  That question has been answered and is no longer a question.

Previous crises have not entailed socialist revolution, but rather than investigate why this is, the approach has been to lament the weakness of the revolutionary left and the treacherousness of existing working class leaders.  Crises therefore are expected to do much of the heavy lifting of working-class political consciousness, allied to an unexplained rise to prominence of revolutionary organisations.  Rather than see such crises as occasions of potential radicalisation which must be based on prior conditions giving rise to class consciousness, this consciousness is assumed to arise from crises itself and the spontaneous activity generated.  This latter activity is then fed by Left economic and political demands that further radicalises it.

This process however requires prior development of the working class, including organisation and consciousness which already disposes the working class to defend itself through ‘spontaneous’ mobilisation that rests on some prior socialist consciousness.  We know that a lack of such consciousness has not been overcome by crisis in itself because of previous decades of defeats of working-class struggle; from a sober assessment of current working-class consciousness and passivity, and from appreciation that the last real revolutionary period rested on this prior development of socialist organisation.  Of course, many struggles in this period were betrayed by reformist and Stalinist leaderships but these betrayals had precisely the effect of setting the working-class back decades.  It’s why continuing opposition to these political trends in the working-class movement is a continuing imperative.  But it is wrong to simply repeat the explanations of previous defeats that happened decades ago as applicable now to much later generations.

In demanding a more stringent lockdown the purveyors of this general view rally behind the most lurid and sensational predictions of the effects and deaths that will be caused by Covid. The pandemic itself has become a ruling class conspiracy – “as far as the ruling elite is concerned, if the old and infirm die and allow for further cuts to pensions and health care, that is to be regarded as a positive good.”  As has been pointed out: across the world capitalist governments have spent fortunes in response to the pandemic.  If their objective has been to save money they have failed abysmally. In Ireland and UK the state has borrowed billions and seen their debt mushroom as a result.

If their favoured policy of total lockdown requires emulation of the approach of China, Australia and New Zealand etc., as some have claimed, then why are these countries not also in on the conspiracy?

This left appears oblivious to the cost of lockdown in terms of deaths, illness and social and economic loss; and sliding over who suffers these costs: from the lost jobs, education, domestic violence and damage to menial health.  It may point to the massive and wasted expenditures on testing and tracing systems that don’t work, and from failed and corrupt contract awards for PPE etc., but what has facilitated this?

They don’t stop to consider how their approach supports the politicians and state bureaucrats who cancel cancer and other life-saving treatments in order to protect their politicised health choices, and a health system that is failing and for which these politicians and bureaucrats bear responsibility.  Instead, their demand for lockdown puts the onus on the population to accept the most restrictive forms of social control and denial of civil rights, opposition to which is another one of their conspicuous silences.

Instead they oppose the opening of schools, though children are not at significant risk and infections in schools are low (see here and here and here).   One organisation dismisses schools as a “child-minding service’ employed to force parents into work, oblivious to this being a service that many parents are very glad of. It complains of trillions going to corporations but ignores that this is a product of lockdown; or do they believe that the state would give money to furloughed workers and not corporations?  What would happen if they didn’t, would all these corporations survive?

This organisation proposes committees that “would provide the means to organize a Europe-wide general strike to compel the closure of schools and nonessential production and allow workers to shelter at home.”  A stay away from work in order to get paid to stay away from work!  Since when did the capitalist class pay for an indefinite general strike? And how would one be organised with the mass of workers at home and socially distancing?  How would any revolutionary potential of a general strike be realised, i.e. acknowledging that society cannot simply close down but must continue to run, raising the question of who runs the economy – who rules?  How would this be possible unless major sections of the working class were actually at work?

“Massive resources must be invested to provide a high standard of living to everyone throughout the pandemic, including the resources required to maintain online learning for students.”  But how could anything be invested if the workers required to deliver the investment are to stay at home?  Or is this yet another essential section of the working class that must work – like so many the total-lockdown supporters refuse to acknowledge.

“The claim that there is “no money” for such measures is a patent lie. Trillions of euros have been handed to the banks and corporations in bailouts since the beginning of the pandemic. The resources exist, but they are monopolized by a corporate and financial oligarchy.”  The utterly un-Marxist idea is again advanced that money can equal “resources” and that pieces of paper are of use without human labour to deliver the real goods and services for which they are exchanged.  And anyway, isn’t the monopolisation of productive resources by a separate class not called capitalism?

Indeed it is, which once again demonstrates that every intervention by the ultra-left telescopes into demanding the overthrow of capitalism.

“The fortunes of the rich must be expropriated and the major corporations transformed into public utilities, democratically controlled by the working class as part of the socialist reorganization of economic life on the basis of social need, not private profit.”  But how are “the major corporations” to be put under the control of the workers unless they are actually at work?

As we know, Covid-19 is a specific threat that must be defended against.  When advocates of total lockdown call young people having a party ‘granny killers’ they acknowledge this reality.  Yet the pretence is still made that everyone is equally threatened at least to such degree that no strategy must distinguish between those who are old and/or otherwise vulnerable and those who are relatively young and healthy.  Students must go home, schools must close and young people socialising is an existential threat.

What this does is weaken the protection of those most at risk because it calls into question any restrictions.  If there really was no significant differential impact then many thousands of young people would have died. They haven’t.  Many working class people, as I have noted in previous posts, and here in a previous comment by a reader, are ignoring the rules when it suits.  The left advocates of complete lockdown are really now following Bertolt Brecht when he said – should this left not just elect a new people?

Most people however do register the greater threat to older and vulnerable people but rather than this being informed, encouraged and organised it has more or less been ignored by the authorities when it comes to organisation of the response.  Tightening restrictions affects everyone, and in some ways young people more, and undifferentiated relaxation exposes older people more because it cannot be admitted that they should still be shielded or socially distanced; just in case everyone decides that is the way it should stay, that this is the correct approach that should now be implemented and those in charge have got it wrong.

This approach has failed in Ireland, Britain and across Europe and further afield.  Part of the left doubles down and says the lockdown is not tough enough, without weighing up the cost or admitting that total lockdown has never actually been implemented because it can’t.  You cannot close down society, which relies on the continuous labour of millions of workers.  Admission that ‘essential’ work must continue never admits the enormous extent of what this entails given the development of the forces of production and division of labour involved.

A blanket threat in many ways protects the authorities from blame for failure because Covid-19 becomes an all-embracing indiscriminate threat that is difficult to defend against because of this character.  It allows them to introduce harsh social restrictions and coercive powers that for most people are totally unnecessary, and which some on the left who, were they consistent, should support because (1) they should endorse a fair claim to be necessary and (2) totally warranted given the assumed threat.  What could be more important that saving lives?

The longer the pandemic lasts the more incredible become the demands for total lockdown and ‘zero-Covid’.  The failure of existing restrictions has been too great to inspire notions that just more of the same will be both successful and at an acceptable cost.  Given the attacks stored up for the future, there will be plenty of time to reflect on the lessons.

7 thoughts on “The Left and Covid crisis”