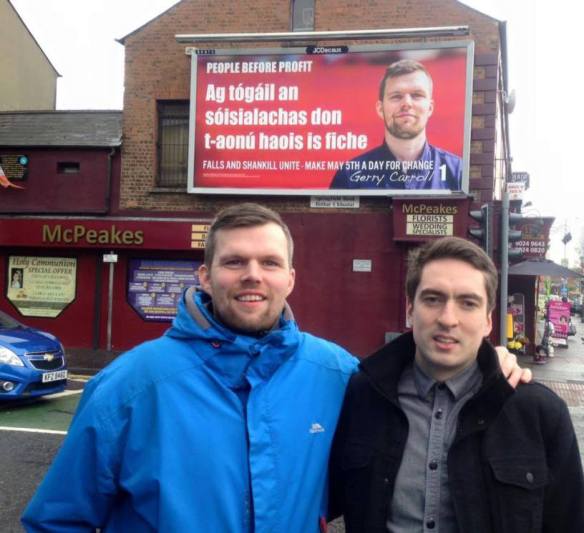 In a 1 June article Socialist Democracy (SD) wrote that “a popular slogan by People before Profit (PbP) candidates – “we are neither Orange or Green, but Socialist!” – is a form of neutrality that draws an equals sign between Irish republicanism, with its revolutionary and what Lenin called “generally democratic” content and the utterly reactionary and counter-revolutionary politics of Unionism.”

In another post SD say that “This neutrality ignores socialist support for democratic rights and the frequent alliances between republicanism and socialism that are part of our history. It can blind workers to the very real mechanisms employed by loyalism and the state to combat radicalism amongst Protestant workers and prevent working class unity.”

First some basic points.  Saying you are neither Orange or Green, unionist or nationalist, is not to equate the two, no matter how SD convinces itself it does.  It is a matter of fact, and a matter of principle that socialists are not unionists or nationalists.

It is therefore not only permitted, but absolutely required, that socialists state that they are socialist!  At a very basic level it is as simple as that.  It is also the case that they need to do so to distinguish themselves from Irish unionism and Irish nationalism.  In the SD version of democratic alliances with republicanism it would seem that we cannot say that we are not unionist or nationalist, which amounts to politically surrendering your flag.

Does SD believe that Irish nationalism, in whatever form, can unite the Irish working class?  If so, it should reconsider its independent existence.  If not, it should drop this ridiculous line of criticism, and in doing so the comrades should consider how they ended up defending such a position.

I will venture that they did so because of their understanding of nationalism. As quoted above, SD states that “Irish republicanism . . (has a) revolutionary and what Lenin called “generally democratic” content”, forgetting the fact that Sinn Fein is no longer standing by the traditional republican programme. The Provisional republicans, as SD say (in their article of 10 March) have moved from “armed struggle to constitutional nationalism.”

Their failure to register this when condemning PbP must have something to do with their declared opposition to the slogan of the PbP and their claim that this disregards “the generally democratic programme of Irish nationalism.” (1 June 2017)

SD state in their response to my original posts that “all theories have to deal with real life”.  So how does the theory that the programme of Irish nationalism is “generally democratic” stand up to real life?

Let’s examine the concrete, real life expressions of Irish nationalism, and not the theoretical one clearly envisaged by SD.

Fine Gael and Fianna Fail, the ‘United Ireland Party’ and ‘Soldiers of Destiny’, are both reactionary Irish nationalist parties of the capitalist class.  Sinn Fein, by SD’s own admission, is a “constitutional nationalist” party and cannot be considered as either a party of working class interests or even of revolutionary nationalism.  The role of the real republicans is actually obstructive of working class unity, since they convince everyone including themselves that the only alternative to the peace process and the current sectarian arrangements is militarist violence.  In doing so they don’t threaten British rule but bolster it.

So, in the real world, just what nationalist movement does SD defend and support, so much so that it wishes not to declare socialist independence from it?

Socialist Democracy do advance correct criticisms of PbP, but they are lost in an avalanche of the good and the simply atrocious, which will convince no one who is not already convinced.  Its articles are written in such a way that it is not clear that they are designed to convince anyone not already on-side, but simply to declare a position.

This reaches the point that even when PbP make clear that it is not neutral on the question of democratic rights and the issue of the border this isn’t welcomed, but dismissed – “ A key slogan of the new [People before Profit] election campaign is for a socialist united Ireland.  Is this anything but a re-branding following fierce criticism of their previous position of neutrality between the reactionary ideology of loyalism and the generally democratic programme of Irish nationalism? (Emphasis added by Sráid Marx).

In summary, my original posts were designed to raise the problem of strategy that socialists face in the North of Ireland.  The response from Socialist Democracy does not take us any step forward.  My initial overall impression when coming to draft this reply to their criticism was that the comrades are wrong in several serious respects in relation to socialist strategy.  In drafting the response my final overall impression is now one of their more or less complete confusion arising from misunderstanding the reactionary role of Irish nationalism.

On this there is obviously much more to say (see this post and ensuing discussion for example). The demand for an end to partition and national self-determination has historically been reflected through Irish nationalism (and still is today by the real republicans), but the utter inadequacy of nationalist politics in maintaining any democratic content in these demands in its real world political manifestations, in its political parties and programmes, is something that must be understood.  Otherwise the essential role of socialist organisation and a socialist programme, based on the self-activity of the working class itself, and not on organisation and a political programme divorced from it, is not understood.

Irish nationalism must be combatted North and South because (among other important reasons) it cannot uphold the democratic impulses that are contained, and have erupted periodically, within the Irish working class.  This much should be obvious in the South of the country.  It should certainly not be defended because at some times and in some places it has taken leadership of struggles that have had such a democratic content.  Not least because it will fail and end up strangling such democratic dynamics while sidelining and opposing socialism.

This is what happened over the period following the rise of the civil rights movement, where Irish nationalism, in the shape of republicanism, substituted itself, its methods and its programme for this mass democratic struggle, and then helped bury it in the sectarian deal brokered by imperialism.

This is the underlying political analysis that answers a question that might be posed by my posts – does any of this matter?  The SD response states that “perhaps criticism of Socialist Democracy and its politics is simply commonplace”, but the author will know that it is, in fact, much more commonly ignored.

Socialist Democracy wants to resist the rightward drift of the socialist movement in Ireland, and its arguments would ideally be as powerful as pure argumentation can be in countering this drift. Unfortunately, its arguments cannot play such a role, and if the comrades seek that they should they will have to be seriously revised.