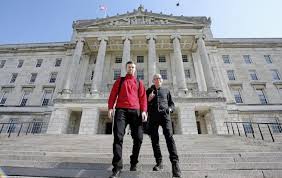 In two recent posts I posed some questions about socialist strategy in the North of Ireland:

The answer provided in a response is summed up as follows:

“If the working class mobilises we will build a socialist alternative. If they do not we will have barbarism.  There is no third way.”

It must be obvious that such a reply is at a level of generality that simply doesn’t engage with the question.  For the question posed is how do socialists intervene to advance their politics; what strategy do they adopt to further working class consciousness and organisation?  Not wait until the working class catches up with the demands of certain socialists.  Either it does or it doesn’t isn’t an answer.

The view of my critic is that he is putting forward a revolutionary programme and I am not; so he says just before the quote above that:

“To search for the possibility of revolution we must widen our focus. Stormont is a rampart against the working class, so we must look to an all-Ireland perspective and to the actually existing struggles in Britain and Europe to build an alternative.”

The implication of this is to look away from the barrenness of the North of Ireland, and rather confirms the point of my question – that socialists must seek what purchase their politics have on reality within the North.  The reply says that we must look for revolution elsewhere, in the rest of Ireland, Britain and Europe.  In this respect, placing the problem within an all-Ireland perspective is a start and the comrades of Socialist Democracy (SD) might find it productive to consider and contribute to the debate carried out in the comments to another of my posts here.

In replying to this response, I want to cover three questions: the role of reforms in the SD programme, their characterisation of Sinn Fein, and an example of the damage done to their socialist politics through seeing everything through the prism of ‘anti-imperialism’.

It is not clear to me that the comrades fully understand my argument, because some of what they say is a caricature, which conveniently allows deployment of seemingly convincing arguments that are beside the point.  This starts from the very first sentence, where I am accused arguing for a reformist movement.  The comrades are surely aware that a movement struggling for reforms can be led by revolutionaries; that revolutionaries are in favour of reforms, and of building movements that fight for them, and even if these movements are reformist.  This is the argument that I have put forward and at this general level I cannot see that they should disagree, although there is no sign that such an approach has informed their perspectives.

The author appeals to history in his denial of my argument that SD sees no room for reforms and is ultra-left, but it would have been more convincing if he had been able to appeal to what he had actually written.

In my post, I noted that Socialist Democracy’s programme for the NI Assembly election was a call “for no return to Stormont and its permanent closure, and also for a 32 county Workers’ Republic.”  I wrote that “obviously, the latter implies no room for reform in the North, with the immediate task being to destroy the Northern representative institution as a prelude to ending partition.  If this is the immediate objective then it can only mean any less radical reforms are pointless or just not possible and no social or political movement should be built for any other objective than ending Stormont.”

This judgement by me of the SD position is supported by reading an earlier SD article, which finishes by declaring the following:

“The call “Smash Stormont” and the struggle for a 32 county workers’ republic is the only legitimate response that socialists can make. Without this call we have not taken the first step to proposing an alternative society based on the Irish working class.” (Emphasis added by Sráid Marx)

The response to my posts by SD doesn’t challenge the logic of my argument but claims that “Of course socialists should support movements for reform. But we should also be honest and address the weakness of stageism, of the left populist, “people power” approach and its companion in narrow trade union economism. Capitalism is coming to the end of days.”

The author appears to conflate reforms and the struggle for them with the Stalinist programme of stages, so perhaps it is no wonder he finds no role for reforms in the SD programme for the North of Ireland.  But then he states, in old-style biblical eschatological form, that “capitalism is coming to the end of days’, which calls into question the struggle for reforms anywhere on the planet!

When it comes to concrete examples of fighting for reforms Socialist Democracy’s response has been utterly dismissive.  Of the People before Profit (PbP) initiative to pass legislation in the Northern Assembly to remove anti-trade union legislation SD has previously written the following:

“The main example of a parliamentary and reformist approach to the local assembly was when Gerry Carroll and Eamon McCann drafted a bill to abolish anti-union laws in the North of Ireland. McCann went on to explain the rationale in some detail at a May Day demonstration. Union laws, he explained triumphantly, were a devolved matter. A local campaign could force the Assembly to abolish them and free the workers.”

“This is stupidity on a grand scale. Echoing the line of trade union propaganda, the unionists are seen as part of an undifferentiated elite who can be pressured by “people power” and Stormont as a neutral local assembly rather than as a sectarian and colonial chamber of imperialist puppets.”

“The nature of the DUP and the unionists as parties of the far right is ignored. As long as there is a unionist majority (essential for the institutions to survive) there is no parliamentary road to abolition of trade union legislation, which is in any case completely unused.” (Emphasis added by Sráid Marx).

In other words, or rather to extend its own words, there is no possibility of reforms while there is a unionist majority in Stormont.  While claiming that “all sorts of individual reforms may be possible under Stormont” Socialist Democracy sets out the argument above and also states that “it remains totally unclear what mechanism would bring about local reform.”

The author knows it is ultra-left to deny the fight for reforms but can’t help dismissing the possibility of it succeeding.  Even in relation to a fight against austerity, SD puts forward the “first task” as building “a movement to tear down the Stormont administration”. (article 30 May 2016)

But let’s take the anti-union law example quoted above – “the main example of a . . reformist approach”; even as described by Socialist Democracy, the initiative to remove anti-union laws was one that should have been supported, not summarily dismissed as “stupidity”.

People before Profit (PbP) were arguing for a campaign, not simply reliance on an Assembly vote.  Might not a campaign for a vote mobilise trade unionists?  Might it not put pressure on the trade union leaders to give it more support than they might wish?  And had it been successful, would it not have removed an excuse for trade union bureaucracy inaction?  There may have been all sorts of problems with the PbP proposals, including its campaign, but these are really irrelevant to the argument here because SD opposed it in principle.

Seeking to use the local Assembly to change the law does not automatically entail acceptance of it as anything other than a sectarian institution, as SD allege.  It simply means socialists don’t abstain just because the conditions in which they are compelled to fight are not ones that they would choose.

However, in formulation after formulation this is not the approach the SD comrades take and often their demands appear unpolluted by the reality of politics in the North of Ireland, which is dominated by sectarianism.

It is not dominated by any anti-imperialist struggle, however understood, but the SD perspective is that this must be the case, and reality must be made to conform to theory.  In my view, SD hasn’t adjusted to the defeat of this struggle, a defeat that happened many years ago and which it recognised, but which it has not digested and adapted to. In this respect, it displays similarities to the real republicans.

So, perhaps the demand for the removal of Stormont could be supported if it tallied with a popular movement, one that saw through its sectarian structures (as in the early 1970s); but there isn’t such a movement and SD knows there isn’t.  Yet it doesn’t appear to draw lessons from this for its strategic or tactical interventions.  As even they state themselves – “popular consciousness is still contained within the consciousness of the peace process that the parents of current activists voted for and which they grew up in. Imperialism does not exist.”

SD can see no role for workers in winning reforms.  Its response says that “we already know how individual reforms might come about”, but then allows the working class no role whatsoever, either in winning them or building a movement that could perhaps learn from any defeat.  Yet it still demands that workers smash the Northern State!

SD implies that fighting for reforms must involve a “reformist dilemma”, which means those seeking reform must support Stormont, but this is not necessarily the case.  As I noted in my original posts, fighting for reforms can expose the limits of potential reforms and the electoral forums within which they are fought for.  Socialist Democracy is aware of this, but at such an abstract level that it draws the wrong lesson that there is no point.

The intervention of SD in the elections was to put out a petition calling for the permanent closure of Stormont.  Who has the power to do this?  The British.  Is that who SD were appealing to?  If not, to whom?  If PbP put out a petition calling for an end to anti-trade union laws would SD support it, even though only the local Assembly could enact this?  Apparently not, but what’s the difference?  There is of course one obvious one, but it’s not one SD would want to draw attention to.

Perhaps the petition appeal was to Sinn Fein, or to its supporters, but if this was so it badly judged the mood of the latter and got the first totally wrong.  In fact, it’s hard to see the case for either of these explanations, given what SD has previously written about both, including in its reply that Sinn Fein is conciliatory towards unionism and argues that Stormont can reduce sectarianism.

PbP get it in the neck for placing no conditions on returning to Stormont but they would have looked pretty stupid if they had.  Putting forward permanent closure of Stormont as the key task for workers looks less and less persuasive the longer the temporary suspension lasts.

1 thought on “Socialist strategy – reply to a critic 1”