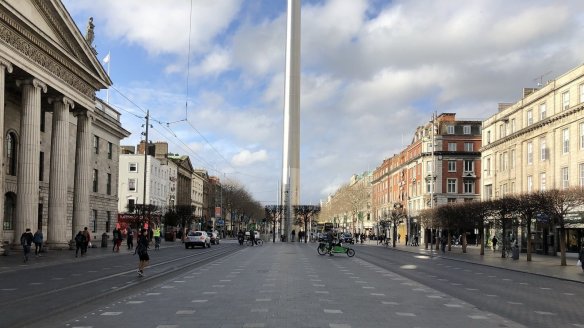 Following ‘the science’ and its scientists that we looked at in the two previous posts does not look well in hindsight, as a short review of the course of the pandemic in the Irish State demonstrates.  In the early days these were forecasting 20,000 deaths, six times the current figure which is just over 3,300, and an even greater over-estimate than the influential Imperial College paper that forecast a possible 500,000 deaths in the UK.

At the start, what characterised the response, just like Britain, was complacency.  On 4 March the Chief Medical Officer Tony Holohan of the HSE stated that “as things stand” there was no reason why the St Patricks day festival could not go ahead, and he did not believe that it was proportionate to prevent Italian rugby fans from visiting Dublin for a cancelled match.  The attendance of thousands of Irish racegoers at the Cheltenham festival also went ahead.  From the point of view of the generalised lockdown that was later to be implemented this was a catalogue of mistakes.

The State supposedly had a policy of test and trace, in which all cases could be identified and followed up to ensure isolation.  The system and its resources were quickly shown to be inadequate, with it only subsequently being admitted that test and trace did not identify where infections came from.  Prof. Philip Nolan from the National Public Health Emergency Team (NPHET) stated that “we would like to go back and find out where people are getting the virus, but we don’t have the time or resources to pursue this academic exercise”.  In any case, in October researchers from Beaumont reported that up to two out of every three infections could be missed through poor technique when people are being swabbed.

At this early stage the policy on testing was confused: so to be tested before March 12 a person had to be symptomatic or either in close contact with a confirmed case or have travelled from an affected area. Then having one symptom was required, then the list of symptoms changed, and if this threshold was passed the person needed to be in a priority category.

These early mis-steps have led many to see the issue as being one of weak or incomplete implementation of policy rather than the policy being misconceived in the first place.  The record suggests the latter.

The island of Ireland could not isolate itself from the rest of the world so could not avoid importing the infection.  Having imported it, it was always going to be impossible to identify all cases since most were asymptomatic.  Social distancing and isolation of suspected cases was considered to be the equivalent of the mass quarantine implemented elsewhere but was not.  The measures adopted simply slowed the spread of the infection, justified to protect the health service, but with the by-product that doing so gave it time to mutate, as it did.

Much bigger ‘mis-steps’ were made at this time, again flowing not from failure to adequately implement policy but as a result of its conception. On March 6 the representative organisation of private nursing homes, Nursing Homes Ireland, (NHI) banned all visitors to its homes.  Four days later Tony Holohan of the NPHET questioned the closures “before they are really necessary” while the Department of Health only eventually gave approval to the action ten days after NHI had introduced the restrictions.

In early March Holohan was claiming that ‘we had reacted very early and with significant action compared to other countries’, although the performance of these other countries seemed to be held up as some sort of exculpation rather than a pointer to a failing common approach. For the Chief Medical Officer their response “in the first instance had to focus on dealing with community transmission of this virus.  There was simply no way of protecting nursing homes or any other institutional setting if we don’t control the spread of this infection in the community.”

NPHET later claimed that it was not until late March that research pointed to the threat of asymptomatic transmission in care homes although by the end of May Paul Reid, chief executive of the Health Service Executive (HSE), was acknowledging that “there are obvious gaps in clarity and responsibility in the overall governance and oversight of private nursing homes.”

By mid-April Holohan was stating that vulnerable groups in care settings were a priority, but by that time there were 330 outbreaks in residential cares facilities, with concern expressed about under-reporting.  While boasting of the “unprecedented level of support” given to homes the HSE was unable to provide up-to-date figures for deaths.

Not much later Holohan was stating that it was “not realistic to think we could keep it out of homes”, while by the end of April it was reported that 735 people had died in residential community settings.  By early May the mortality rate in nursing homes was three times that among the rest of population, accounting for 61 per cent of deaths (including those in other residential facilities).

By the end of May the Department of Health had been warned by the health regulator of more than 200 “high risk” nursing homes, while receiving “just an acknowledgement” and “no response”.  NHI had quickly raised concerns around PPE and hospital discharges, but by late March 88 per cent of homes had bought either their own PPE or used home-made. Almost half of nursing homes said that they had to wait 10 days for test results to come back, and publication of cases in particular homes was not provided (unlike for hospitals).

By June it was apparent that nursing and other residential facilities were not the only health and social care facilities where infections were occurring.  At the start of the month, it was reported that more than 200 people had contracted coronavirus while in hospital in 102 outbreaks. By the end of August, it was also reported that about 90 per cent of all cases among over-65s were of nursing home residents (between March and end of June), amounting to almost 6,000 cases resulting in 968 deaths (56% of the total at that point).

By the beginning of the following month concern was again being expressed at the rise in cases among older people.  In early October a NPHET letter noted a ‘sustained increase’ in cases, with home residents accounting for more than half of the 1,810 virus-related deaths, but with Holohan again asserting that it was not possible to document all patterns of infection and that measures directed to the whole population were needed.

The Health Information and Quality Authority (HIQA) expressed concern that there was no “consistency of approach” on whether nursing home residents should be tested where staff had tested positive. The HSE chief clinical advisor claimed that older people could not be “siphoned off safely” but the chief inspector of HIQA stated later that “not all centres where staff have tested positive have undertaken a programme of resident testing.”

In November, NPHET priorities, according to Holohan, were protection of the most vulnerable, continued resumption of non-Covid health and social care services and education of children; but by mid-November it was reported that in the week up to Oct 31 there were 56 outbreaks of infection in nursing homes and 33 associated with hospitals.

Lockdown however appeared to be getting some results, even if this was little more than postponement rather than eradication. This was now success, as was the perceived protection of a health system unable to adequately do its own job of protection.

By the beginning of December the Irish state was hailed, especially by itself, as the best performing in Europe measured by the average number of new cases.  Unfortunately, even in success the most significant threat remained, with Holohan expressing concern at the level of infections in nursing homes despite the highest Level 5 lockdown.  Hospitals also remained a problem, and on 13 November it was reported that pre-admission tests for Covid that had been recommended for hospitals were not being practised by all.  Anne O’Connor, the chief operations officer of HSE, stated that guidance had been changed in the previous two weeks.

By December the problem with hospital acquired infection was continuing, with over 200 confirmed cases in the four weeks up to 13 December and more than 400 picking it up in hospital in two weeks in January.  By the new year the Irish State had gone from the being the best in Europe to being the worst in the world in terms of growth in cases.  The State went from 80,000 cases in nine months to doubling this total in three weeks.

Since there had been a partial opening before Christmas this was held up for blame but there remained no evidence that cafes, hairdressers or clothes’ shops were a problem; it was a question of a seasonal infection flourishing in its best environment with any human interaction facilitating spread.

Doing away with the latter altogether was the only logical extension of the existing policy and all the variations on the different social distancing rules were the proverbial number of angels dancing on the head of a pin.  Very few wanted to go there, and those who might would face the difficulty that closing down sites of infection might have to start with hospitals and nursing homes, with 100 outbreaks in the former from July to mid-December and 93 in the latter.  A study in mid-January reported that the rate of infection among hospital staff in Galway and Dublin was six times that of the local community.

Despite the months of restrictions and despite the worst-in-the-world figures there did not appear to be excess deaths.  The prevailing narrative appeared to tell a story that did not add up.  One aspect however appeared stubbornly consistent, the median age of those dying was reported in mid-January to be 82.  This outcome was consistent with the North despite its apparent different path, with people aged 75 and over accounted for 77.7 per cent of ‘coronavirus-related’ deaths and with 91.5 per cent having some pre-existing condition, Dementia and Alzheimer’s disease being the most common.