An initial effect of Coronavirus in Ireland and Britain was one of disorientation, with uncertainty as to its impact and in particular its effect on those considered most vulnerable.  This is now evaporating.

The response of the British Government was a plan with four stages.

The first has passed and clearly failed.  It was called containment and was to involve trying to catch cases early and trace all contacts to avoid the spread of the infection.

The disease has spread and despite self-praise that the tracing system has been very effective there are an estimated 10,000 cases and no one knows who they are.  The disease has not been contained.

The second stage is called delay.  According to Sky News ‘this means the government will ramp up efforts to delay the spread of the illness’.  This however has only involved a recommendation that anyone with coronavirus symptoms, such as a continuous cough or high temperature, must stay at home for seven days, which appears not long enough to isolate the disease, and is anyway only a recommendation. School trips abroad should be stopped, while people over 70 with serious medical conditions should not go on cruises, which implies the problem is a foreign one that might be imported, and we are way past any such idea.

The second phase has therefore involved no actual measures so that the delay stage merely involves delaying a decision and a delay in doing anything.

This has been ignored by sporting and other bodies who have cancelled events, calling into question the Government’s strategy.  The Government, including Arlene Foster here in the North of Ireland, is hiding political decisions behind the advice of its experts.  Unfortunately, these experts are political appointments, and while Johnson gained credibility by their presence at his first press conference, their credibility will sink faster than his if they follow his agenda.  In Northern Ireland it was appropriate that the long-awaited report on the Renewable Heat Incentive scandal has just been published, reminding everyone of the lengths of stupidity that civil servants will go to in servicing their political masters.

The policies arising from the scientific advice that the British Government claims to be working from obviously conflict with that given in other countries, including the Irish State.  True to the traditions of the British state, this advice is a secret.  What we know is that Johnson appears sanguine that ‘many families will lose loved ones before their time’, and the mass media has played its role in preventing a tsunami of anger that this remark should have evoked.

On Thursday evening Radio 4 had an expert – ‘Chris’ – who continually referred to someone called ‘Boris’ as the font of all authority, as he defended the Governments’ strategy, and the interviewer gave the Government the deference it has so much enjoyed.  Social distancing measures were opposed because they could not be fully effective, but without the least recognition that less than perfect effectiveness in no argument in favour of no attempt at any effective action at all.  The strategy is clearly to allow the majority of the population to get infected in order for it to develop its own immunity and spare the health services from a task that it cannot cope with.

Delaying social distancing measures is supposed to delay the hit on the health service and flatten the impact on it; although it would appear to make more sense that the quick introduction of such steps would be much more likely to achieve this, while it also seems clear that no amount of realistically conceivable flattening will save it.

The third Phase of the British Government’s plan is called research and has been described as follows – ‘if delaying the spread fails, the government will intensify its focus on finding out more about how the virus spreads and how those who are infected can be treated most effectively.  The government has put £40m into finding a vaccine for the virus, which is undergoing clinical testing and is likely still several months off.’

So only if the delay fails will the Government focus on finding out more about how the virus spreads and how those infected can be treated most effectively???  It is impossible to take this seriously, or rather, impossible to take the plan as a serious attempt to achieve what it purports to be its objective.

The final Phase is mitigate, which, according to Sky News again,‘implies this is essentially the worst-case scenario . . . during this phase the pressures on services and wider society may start to become significant and clearly noticeable. At this stage, the virus would be considered widespread.’

However, it is clear by now that whatever impact the Coronavirus has, it will be lessened, or ‘mitigated’, less by anything the Government does than by what people do themselves, including health service staff doing their jobs.  It is beyond doubt that they are not well prepared.

Nothing in the strategy is capable of explaining how health systems will be able to deal with the massive increase in cases involving those in vulnerable groups such as the elderly and those with suppressed immune systems.  Acute facilities will be unable to cope and Governments have long starved social care systems of funds even before the last decade of austerity.

Promises of additional money now are of limited use without concrete plans to quickly requisition buildings or begin to increase production of necessary medical supplies and equipment. And these will also require additional staff, who even now should be brought forward for training in some of the basic tasks that will be required, freeing up qualified medical and nursing staff to carry out more complex tasks.

Self-isolation can only work if many of those isolating are not totally isolated.  An efficient state would be identifying this need and the means of ensuring that these people receive the minimum help in terms of food and monitoring so that they are able to maintain their self-isolation.

To pose such tasks is to expose the weakness of the current health system and illuminate the truth that far from there being no such thing as society, as Thatcher and her acolytes would have it, we are all individuals who are nothing without it.  And the nature of that society determines how we survive and thrive as individuals.  A society that defers to a state that is essentially unaccountable and governed by a moronic narcissist like Trump, or sociopathic liar like Johnson, is not one that can respond adequately to the current threat. 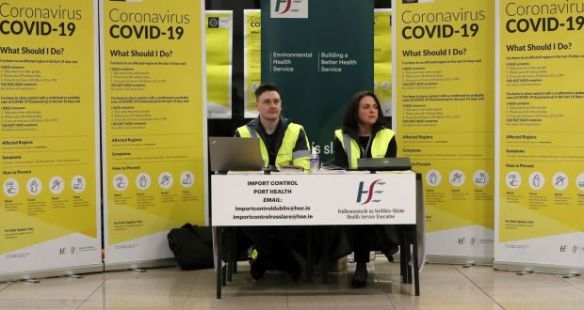 A struggle is therefore required to fight this disease and protect our most vulnerable fellow workers and citizens.  Relying solely on the state, a top-down bureaucratic monster that now has monsters at its top, is not an option.  A campaign to demand an adequate response to the crisis from the state is therefore only one option.

I work in an office, for the state, and it took the local union committee to raise the question of dealing with the virus and its implications for vulnerable staff and their families before local management took even minimal action.  They were, and still are, waiting for orders from above, as everyone working for the state often does, at which point we are back in Renewable Heat Incentive-land.

In general, the union movement has failed to act as a movement (as has the British Labour Party), revealing the extent to which it is a purely sectional organisation and not a class movement; more and more a series of organisations hollowed out of active participants and dominated by bureaucrats.

Acting as a social mobilisation to protect the most vulnerable and isolated would make it appear relevant to many in the working class, to whom its current relevance is not that much.  In Ireland the high level of membership at least gives it the potential to play such a role, although no one can have much confidence that it will do so.

Instead community organisations, including the GAA in Ireland, could play a major role in identifying the most vulnerable and offering them support and assistance.

A pervasive social disease requires a wide social response that only organisations within and for the working class can hope to provide adequately.  This is the perspective that socialists should offer and advance.

In the meantime it is to be hoped that the Governments that have left their populations exposed without adequate protection pay a political price; that Johnson for example is reminded how his breezy cynicism promised that the county is “extremely well prepared” when it obviously is not.

While over half the country has bitterly opposed him as an inveterate liar, and most of the rest have regarded him similarly, the latter have at the same time also agreed with him and so supported him.  With Brexit this might have been easier to do as xenophobia could be employed to ‘fight’ the EU and the imagined hordes of foreigners and immigrants.  But Johnson’s lies will be no use against viral infection and neither will xenophobia and prejudice..

The virus will be with us for some time, if it ever disappears completely at all.  It will more and more become a political issue, as it should. While we all familiarise ourselves with viral infections and epidemiology, and seek to protect ourselves and those vulnerable that we love, we should not forget what our politics means in all circumstances.  The class struggle between oppressed and oppressor is sometimes open and sometimes hidden, but it always exists.