The battle of the Bogside saw the local population expel the RUC from the area and compel the withdrawal of any threat of attack from the B-Special Constabulary.  The Irish Government made a militant sounding speech calling for a UN peacekeeping force to be brought into the North and for negotiations with Britain about its future – ‘recognising that the re-unification of the national territory can provide the only permanent solution for the problem.’

The militancy of the words however were cover for the meagreness of the action.  Although a couple of Ministers wanted to do more, and the political class in Dublin had to respond to the widespread sympathy of the population with the position of the Catholic minority in the North, they also primarily wanted to protect their own position.  Sympathy was reflected in rallies in Dublin’s O’Connell Street, which heard appeals for arms for Belfast, while Dublin Trades Council set up a fund for relief of families suffering from the attacks, many of whom had fled from their homes but with nowhere to go.

While Irish troops were moved to the border it was later noted that they went no further, and that their presence was as much an obstacle to anyone else who wanted to go North with more purpose.  This was clearly the intent of all Dublin’s actions at the time and ever since – to contain a conflict considered to have the potential to threaten the Irish partitioned state as well as the British one.

In the midst of the battle the defenders behind the Bogside barricades had called for solidarity demonstrations to tie up RUC resources that otherwise would have been deployed against them.  Demonstrations took place all over the North with some clashes arising, although it was in Belfast that the powder keg exploded.

Marches were held on 13 August on the Falls Road in Belfast, one to Hastings Street police station, where rioting broke out, and one at Springfield Road police station where shots were fired by police inside the station and fire returned from a couple of weapons in the crowd outside.  When the RUC attempted to disperse a Catholic crowd in Leeson street with armoured cars, IRA men fired some shots and threw a grenade.

Rioting increased and members of na Fianna (the republican youth wing) were ordered to attack Springfield Road RUC station with petrol bombs.  While large crowds from the Shankill Road were close by, the clashes on 13 August were between Catholics and the police.  In Ardoyne, the Catholic area on the North-eastern side of the Shankill area, residents also clashed with the RUC.

The next day the IRA were ordered to carry out defensive duties while rioting took place along the streets that linked the Catholic Falls and the Shankill, with the IRA exchanging shots with the RUC.  Loyalist mobs began attacking and burning out Catholic houses in a number of the streets connecting the two areas, coming in behind the RUC who were forcing Catholics back.  One IRA group took up position inside St Comgall’s church at the foot of the Falls to shoot at the encroaching Protestant mob but with orders to fire over their heads, which dispersed the attackers at least for a while.  Earlier in the evening a lone gunman had shot and killed one man, Herbert Roy, from the Shankill and wounded several RUC men, with the IRA claiming that Roy was a member of the loyalist Ulster Volunteer Force.

A number of IRA members were wounded in later fighting but the initial defending operation at the school could not stand against a much greater number of RUC who were heavily armed.  This included armoured cars with Browning heavy machine guns, which invaded the Divis and Lower Falls area, firing thousands of rounds indiscriminately.  Bullets went through buildings, with one penetrating the walls of a flat to blow off half the head of a nine-year-old boy, Patrick Rooney, as he lay in bed.  Other police fired Sterling sub-machine guns and revolvers, which one British journalist on the scene, Max Hastings, recounted witnessing – “I watched this for forty minutes . . . officers could not tell me what they were firing at.’ Four more civilians were to die from police bullets later that night. 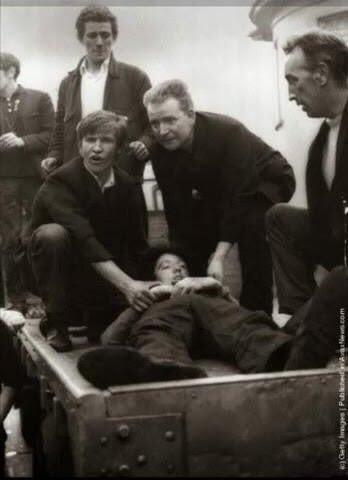 More loyalist attacks took place further up the Falls in Clonard and again the IRA were engaged in defending Catholic streets as one – Bombay Street – was burned down by loyalist mobs.  One fifteen-year-old Fianna member, Gerard McAuley, was killed by gunfire.  Gerry Adams later wrote that the IRA’s actions had been crucially important in halting loyalist attacks at ‘decisive moments,’ and the republican leader at the time Jim Sullivan (later an Official republican) won praise from local priests. These had been afraid that Clonard monastery close to Bombay Street would be burned down when their calls for protection from the RUC had been unanswered.  By contrast, the local priest in Ardoyne had written of earlier events in July that ‘Catholics were as much to blame as Protestants’ for the clashes.

Trouble was not confined to Belfast and there were riots after civil rights rallies in Coalisland, Newry and Dungannon while in Armagh, B-Specials killed one man. In Dungannon the IRA were armed but were persuaded that any armed action would only make things worse.  In both St Comgalls, Clonard and elsewhere the IRA were too small, had too few mainly old weapons and insufficient ammunition.  In the face of much superior forces they could provide no effective defence and, notwithstanding Adam’s claim, the picture of devastation to many Catholic homes and properties after the carnage was over told its own story of its inability to prevent rampaging loyalists and B-Specials, often aided, and certainly not much impeded, by the RUC.

Republican leaders however played up their role in the defence of Catholic areas after the riots had subsided and warned the British Army that the IRA now had ‘fully-equipped’ units in the North.  While a few actions were taken along the border, the IRA was ordered not to take part in offensive operations, a more accurate acknowledgement of its capacity.  The strong public language however was seized upon by unionists to blame the IRA for the violence.  Their oft-repeated predictions of an IRA attack were now ‘confirmed’ by the battle of the Bogside, the IRA actions in Belfast and across the North, and their wider alliance with Irish nationalism proved by the civil rights rallies and the strong speeches from the Dublin government.

The reality of the maelstrom in Belfast on the 14 and 15 of August has been the subject of claim and counter-claim but even the later official Scarman Report noted that during these days the Catholic crowds never left their own territory, which was “invaded” by Protestants.  Indeed, such attacks had begun, as we have seen, much earlier in April, and in the first days of August, with repeated loyalist attacks on Catholic residents of the Shankill area and in nearby Catholic areas such as Unity Flats.  Just before the events above, on 12 August, loyalists had attacked three Catholic-owned pubs in the Crumlin Road, setting fire to one and provoking a riot.

The mobilisation of the RUC with armoured cars contrasted with their earlier withdrawal from the Shankill following loyalist attacks on them by the Shankill Defence Association (SDA).  The Unionist Government reacted to the increased violence in August by invoking the Special Powers Act and imprisoning known republicans while the Belfast Police Commissioner declared on 15 August that he and his deputy were “satisfied that the night’s events had been the work of the IRA.”

The RUC treated the attempted loyalist pogrom as an IRA conspiracy, with one senior officer making incredible claims that ‘armed bands were roaming the grounds of the Royal Victoria Hospital’, which was on the Falls Road, and that these bands had ‘also taken over the operating theatre’.

On 15 August, just a day after being introduced on the streets in Derry, the British Army was brought onto the streets of Belfast, and very much for the same reason.  The RUC misled the incoming troops into believing that they faced attack from Catholics on the Falls instead of from loyalists, who were now enraged that they formed a barrier to further attacks.

Their presence however did not immediately stop the attacks on Bombay and Kane streets and continued loyalist firing prevented the residents of these streets from returning to their burning homes. Loyalists continued to attack Catholic homes on 15 August so that when a Clonard priest asked the British for help the military initially refused and deferred to RUC guidance.  When the priest eventually did get the military to come they were shot at by loyalists, one soldier being hit twice – the first British soldier thereby being shot by loyalists.

The other major target of loyalist attacks was Ardoyne which many residents, especially women and children, had already evacuated, while barricades had been set up to protect the area.  The RUC smashed through these with an armoured personnel carrier followed by police on foot who were then followed by loyalists armed with petrol bombs.

The RUC later claimed that it was under threat and had driven armoured cars into the area in response, whereupon they were attacked by male residents throwing petrol bombs.  The RUC also claimed that it came under fire, although none received gunshot injuries and no bullets were retrieved.  The RUC on the other hand discharged twenty .38 revolver rounds and thirteen bullets from a 9mm sub-machine gun.  One 9mm round went through the window of a house and killed Sammy McLarnon.  Later, another Ardoyne resident, Michael Lynch, was also shot dead by the RUC.

The next day, on 15 August, the Ardoyne residents responded to further attacks by shooting across the Crumlin Road, which separated the area from the Shankill and Woodvale areas, killing David Linton and blinding another man.  By this stage most residents had left but the attacks continued that night, with the loyalist SDA attacking and burning nine public houses in North Belfast.  The RUC then claimed to be under further attack and opened fire with the Browning machine guns that had been firing indiscriminately in the Falls.

These could fire several rounds per second at speeds of 2400/2800 feet per second.  In one instance bullets from one weapon travelled up to a mile away, hitting a police station and causing its occupants to believe they were under attack.  The Scarman report later admitted that “it was a merciful chance that there were no fatal casualties from Browning fire this evening in Ardoyne.”  Over the two days of 14 and 15 August police fired 3,582 rounds.  Further loyalist attacks in North Belfast continued, including on remaining Catholics living or having businesses in the Shankill.

Nevertheless, in the wake of the introduction of the British Army the loyalists were compelled to call a halt to their pogrom, lamenting their failure to continue even for just a couple more days.  “Forty-eight hours”, it was reported, became the lament of loyalists on the Shankill Road, all that they needed they said to finish the job. A sentiment limited not only to sectarian thugs in the drinking dens of the Shankill.  ‘If only the bloody British Army hadn’t come in we’d have shot ten thousand of them by dawn’, as one Unionist senator was quoted as saying in the members’ dining room at the Stormont parliament.