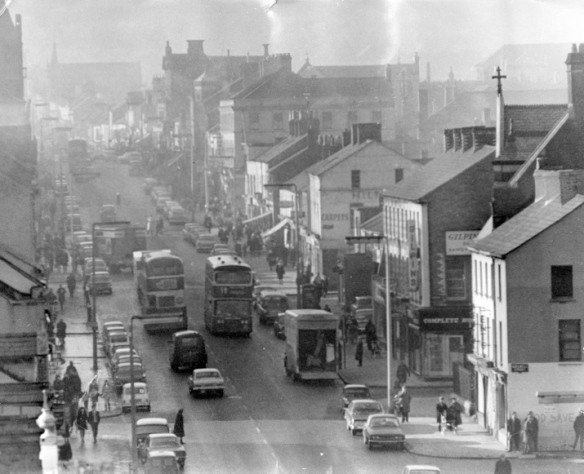 On 26 July 1969 a Peoples Democracy march for civil rights in Fermanagh was banned and 37 of its supporters arrested.  Just over a week later on 2 August an Orange march passed the Catholic Unity Flats at the bottom of the Shankill Road, where trouble had broken out a couple of weeks before.

False rumours had emerged that Catholic residents of the flats had abused children during the junior Orange parade that had just taken place before the adult march.  A loyalist mob attacked the flats – “throwing missiles” and “shouting sectarian abuse” – leading to hand-to-hand fighting with the residents while an RUC loudhailer proved unsuccessful in persuading the mob that the rumours were untrue.  John McKeague, led the attack by the Shankill Defence Association (SDA), later admitting to the Scarman Tribunal that he had ordered it, while also being suspected as the originator of the rumours.

Numerous attacks on Catholics took place elsewhere at this time at the top of the Shankill Road, while the RUC stood by or advised the victims to do as they had been told by their loyalist assailants.  The intimidation at this point was mainly against Catholic residents who were seen as encroaching too far into the Shankill area, while later attacks went beyond this to Catholics to the west of the Shankill, in the Falls, and to the east in Ardoyne and Crumlin Road, populated mainly but not exclusively by Catholics.  In today’s language it might be described as ethnic cleansing, although without the mass murder and without there being any kind of ethnic difference.

At Unity Flats, fighting erupted between the residents and RUC who were accompanied by a number of B Specials.  One resident, Patrick Corrie, was knocked unconscious after a number of blows to the head.  He was taken to the RUC station in Tennent Street in the Shankill and held there for an hour before being sent for medical treatment.  He remained unconscious there for several weeks before he died, the post-mortem revealing several skull fractures causing brain damage.

The Scarman Tribunal found that he had died from injuries caused by blows to the head from the police.  Scarman criticised the RUC and absolved the residents, “whose only crime [was] throwing of stones at their attackers.”  Even an Orange Order investigation later stated that there was no evidence of an attack on the junior Orange parade.

The RUC, who found themselves in the way of a potential full-scale attack on the Flats by loyalists, brought in armoured vehicles, being informed that the loyalists were going to acquire weapons.  Failure to take Unity Flats then led the loyalists to turn on the RUC,  throwing gelignite blast bombs at police vehicles while many residents evacuated the complex.    The RUC in turn defended themselves, although never in this period using CS gas against loyalist rioters, in stark contrast to its massive use in Derry only a couple of weeks later.

McKeague led a delegation to RUC Headquarters demanding the removal of the RUC from the Shankill, while Paisley declared his full support for the police and for deployment of the B Specials.  As a recent book on the start of ‘the Troubles’ notes, an extraordinary situation had developed where five separate organisations were patrolling the Shankill: B Specials, Shankill Defence Association, Orange Order (wearing their collarettes) Royal Black Preceptory and RUC (until McKeague demanded their removal). (‘Burn Out’, Michael McCann)

As the author of this book also notes – “following two days of loyalist violence and destruction, large swathes of the Shankill lay in ruins, with almost every shop attacked and many looted . . . . Unsurprisingly, McKeague blamed the looting on nationalists.”  By 3 August the ‘Shankill looked  . . . as though it had been blitzed.  Hundreds of windows in shops and private houses were smashed and the contents of shop windows looted.”

McKeague succeeded by early August in expelling the RUC from the Shankill, although some members of the SDA were policemen and many were B Specials.  Just as loyalists were first to throw bombs at the RUC, so were they the first in Belfast to create a ‘no-go’ area.  McKeague then attempted to negotiate the hand-over of particular flats that directly faced onto the Shankill to what he considered to be loyal Protestants, to be told by a residents’ representative that the SDA would get ‘not one stone in Unity Walk Flats.’

The ties of street vigilantes to the highest political levels of the Unionist regime were illustrated by the exposure that just before this failed attempt by McKeague he had met the Northern Ireland Prime Minister, Chichester-Clarke, claiming that he had fully informed him of what he was going to do and claiming also that he had the Prime Minister’s blessing.  The meeting also took place just before Chichester-Clarke broadcast a condemnation of sectarian attacks and expressed hope that the perpetrators would be subject to the law.

The RUC continued to find themselves fighting loyalists intent on entering Catholic areas while on many other occasions simply standing back.  McKeague toured the Shankill whipping up sectarianism and organising the SDA, telling loyalists at one meeting “that ‘papishers’ should be given a one-way ticket to the Republic.”  These rabble-rousing speeches were ignored by the RUC, who also ignored other attacks on isolated Catholic residents, on one occasion the unfortunate victim being told by the RUC that they could not help because “they had no time.”

NICRA organised a meeting in the Catholic Andersonstown area and condemned the RUC for failing to protect Catholic residents, noting that those who had been arrested were looters of shops on the Shankill but not those intimidating Catholics.  One RUC officer claimed that from 1 July to 12 August (when all this was going on) “he had no experience in the district of “actual and real intimidation”, although he was “aware of rumours going around.”

During this time Billy McMillan, the leader of the IRA in the city, admitted that the organisation had come under pressure to act but that their “meagre armaments” were “hopelessly inadequate” and the “use of firearms by us would only serve to justify the use of greater force against the people by the forces of the Establishment and increase the danger of sectarian pogroms.”

The left was just developing its organisation, with Peoples Democracy only launching its own newspaper earlier in the year.  As Michael Farrell put it in a discussion in April published in New Left Review – it was necessary to now “develop concrete agitation work over housing and jobs to show the class interests of both Catholic and Protestant.”  But as Bernadette Devlin also stated in the same discussion – “we are totally unorganised”; while Eamonn McCann stated that “we have failed to give a socialist perspective because we have failed to create any socialist organisation”. Even Farrell noted that at this time “we cannot form any high level organisation, as we do not yet have the theoretical basis for any clearly determined policies, in fact we have not even discussed some elementary problems.”

Events were thus running far ahead of any possible perspective that the left could embark upon that could allow it to play a direct role in shifting the direction of events.  Loyalism was presenting any problem with housing as one of Catholic encroachment into Protestant areas, as symbolic and real evidence of the threat posed to their position by Catholic advance, even if such advance was only intended to achieve equality.

So it was against this background that the annual Apprentice Boys parade was to take place in Derry on 12 August.  Trouble was all but inevitable and there were calls that the loyalist march in the mainly Catholic city should be banned.  To do so however would fatally weaken the supposedly moderate Chichester-Clarke leadership.

The march would go ahead and trigger a series of events that would lead in a couple of days to the British Army on the streets.  The London Government had already flown 500 British troops to the North in April after the first explosion carried out by the Ulster Volunteer Force; had moved troops to the naval base in Derry in July, and had moved a detachment of troops to RUC headquarters in August.  The British troops that were to appear on the streets were already in Northern Ireland and British Military intelligence already knew what was going on, as did the British Government.  Whatever was going on during the months before August was not enough to make them feel compelled to intervene.  But this was about to change.