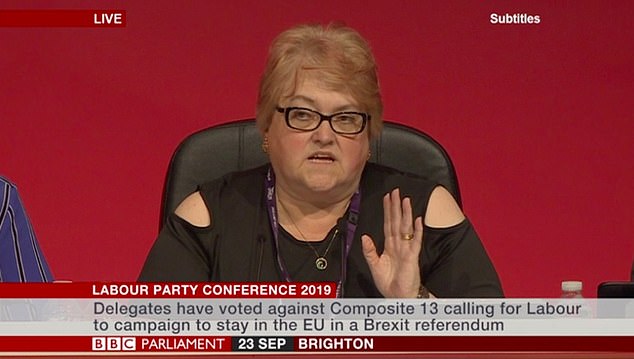 What do you do when you are leader of a Party and the vast majority of your members support a policy that you oppose?  Well, you can’t very well allow them to control the party can you?  So you can’t ensure it operates democratically.

What do you do when the majority of your voters also support that policy?  Well, you dissemble, confuse, appear to sit on the fence and declare neutrality.

In the case of the membership you first prevent them getting their way by stopping them voting on it at conference.  The next year you so manage the policy that is voted on that you can effectively continue to push your own, while of course appearing to do something different and pretending that the members got what they wanted.

But since the new policy does not make much sense the party membership are still not happy and come back to the next conference in the next year and vote again on what they want – and this time they win!  So what do you do now?  This time your friends say to the membership – ‘You Lost’ – and they start singing your name at the conference.  And it’s a victory!

For the rest?  Well, for them it’s then like being at a party where people start singing, and you don’t feel like joining in, but you’re made to feel your spoiling it for everyone, and spoiling the fun, if you don’t join in.  You really don’t want to be a party-pooper so you’re invited to suck it up.  After all, this leader has had it tough.

He’s been accused of all sorts of things that were so ridiculous that your first response might have been to ignore it. But the slander and smearing goes on and on and you want to have a square-go at the traitors inside the Party who are telling these outrageous lies, but the leader can’t trust you, so you’re not allowed.  Remember, the leader can’t very well allow you to control the party.  It’s a ‘broad church’, and just like in church it’s your job to listen to the preacher and then go out and do God’s work.

But this goes on and on, so the leader says he’ll do something about it and these terrible things will be stopped, and again and again you hear the same record.  Some people wonder why he’s saying the same thing about how bad it is, yet he’s saying it again. Why is he having to say it again?  Surely it’s been sorted?  He’s told to apologise and effectively he does, but if this happens again and again why is he apologising and nothing is changing?

Then I hear on the radio that the new manifesto is going to empower people, and I think to myself – WTF, really?  The only thing you have had the power to lead to ’empowerment’ is the membership of the Party you lead, and you’ve stood in the way of it.  Instead you’ve allowed all these reactionary shits to accuse you of nonsensical crimes.  The last time I viewed such a nightmare I was reading ‘The Trial’ by Franz Kafka, and it didn’t end well.  And this one doesn’t look like it will either.

In the election you’re facing a compulsive liar, whose own supporters don’t even trust.  They don’t believe him, but they do agree with him, and they are going to support him. But many people have gotten fed up with you.  You’re supposed to be different – he is what he is.  You are not what you have claimed to be. You’re supposed to be a conviction politician, who embodies honesty and sincerity and many people can see that you haven’t embodied either.

The dam that that held your so-called ‘red wall’ has just sprung two leaks and the first one is the enormous one. Just like a dam that you have seen in the films, your wall of support doesn’t break open only at this point, and other fractures appear in the edifice, and water spurts out of every one of them, everywhere – a hundred and one different cracks appear and it seems as if there are lots of reasons why this wall is going to fall.  When it falls it might seem difficult to say which one is responsible for the whole thing collapsing.  Lots of people look for more and more deep reasons for the collapse, the better to demonstrate their appreciation of the enormity of the collapse. But really the one big crack was vital in creating the rest.

There is a particular risk in immediately seeking the most profound reason for what has happened, although it’s not inevitably wrong and does not invalidate the attempt, but it does involve a risk.  It’s the risk that the explanation becomes so deep and meaningful that it can convey the impression that nothing could have been done about it.  We could never have won, the pressure against the wall of the dam was just too strong.

And this can lead to feeling sorry for the leader, who has been up against it all this time.  And I would feel this way too except I, like millions of others, is soaking wet and praying I’m not going to drown further down the line.  You can feel sorry for the leader if you want, my attitude involves rather more colourful expressions of emotion.

The historic defeat of the Labour Party was the result of a swing to the Tories of just 1.2 per cent and a swing away from Labour of 7.9 per cent.  The Tories won it because Labour lost it.

It lost it primarily because it lost voters loyalty on the big question that mattered – Brexit.  The machinations around it infected everything else Corbyn did, just like the real Brexit will determine so much else in the real world; limiting what good is possible and spurring on everything nasty, cruel and reactionary.

Sky called it the Brexit election, the Labour Party complained that it wasn’t, but now the Party leaders admit it was – a bit late to recognise the obvious.  The Political Studies Association reported polls asking about the issue ‘that will help you decide your vote’ and it was Health – 47% and the Economy – 35%; only 7% said Europe.

I could get even more annoyed now because I really dislike stupidity, especially in those who have no business being stupid.  But it wasn’t really stupidity – the reactionary position on Brexit and all its calamitous concomitants, such as suppressing Party democracy, is a sort of politics: ‘socialism from above’ is the kindest way of describing it even though there is no such sort of socialism.   It’s why it might be better to describe it as ‘state socialism’, or much more accurately, better to call it social-democracy and Stalinism.  (In this respect what was also worrying was the impression given by many socialists that the radical aspects of a social democratic programme was really socialism.). But to get back to the point.

What we saw was the nationalist politics of Brexit devour its misguided children, exemplified by Denis Skinner losing his seat to someone better able than him to embody the reactionary logic of Brexit. Unfortunately, these people brought down the rest, the majority, who have always known that Brexit had to be opposed.

If we want to look at the weaknesses of British social democracy we could do worse that start here – the narrow nationalism of the British left going back to Tony Benn or even further to Manny Shinwell and Aneurin Bevan.  Their opposition to ‘Europe’ resting on the Sterling Area and the Commonwealth, a bogus commitment to internationalism that rested entirely on the relics of Empire.

These weaknesses have been imbued by the radical left supporters of Brexit who think using one less letter and replacing one other makes a difference.  These people share the same conception of socialism – state ownership and a national state to implement and defend it from foreigners.  Entirely disappeared from consciousness is that we should be uniting with ‘foreign’ workers against our own state and theirs.  In fact, for a socialist, no worker is foreign, foreign to us is the nationalism that seeks to divide us.  Just like the Shinwell’s of old they condemn the narrowness and racism of Europe for not embracing the world while sailing on a boat that doesn’t leave the shores of Dungeness.

Labour lost 2,585,564 votes from 2017 to this election but the media narrative of the working class deserting Labour over its failure to support Brexit is a continuation of the distortions and lies that has been their staple.  Early estimates claim that over 1.1 million of this reduced vote was Labour Remainers voting for other remain Parties while perhaps 250,000 Labour Leave voters also transferred their vote to these Remain parties.

Antipathy and opposition to the figure of Jeremy Corbyn also seems to have played a major role but this is a combination of very different things that became important precisely because one person could be the focus of all of them.  For more than one reason the leadership is to blame – making Corbyn the sort of Presidential figure to the exclusion of other leaders in the campaign is probably the least important.

Anti-Corbyn hostility combined the opposition of Labour leavers; those prey to the calumny of the mass media; the failure to openly explain and discuss massive policy proposals dumped on the electorate at the last minute giving rise to some cynicism, and most of all duplicity over Brexit and apparent failure to take a position.  What price the one-day conference to discuss the Party’s Brexit policy now?

We need to stop talking about the Corbyn project in the Labour Party because clearly that project didn’t include opposing Brexit and didn’t include empowering the membership, which remain vital to any future progress.

One take on the election had a wonderful quote, ‘Disappointment is a trifle.  Disappointment is a luxury we cannot afford. The dilemma is simple but imperative. Whether to submit to mere fortune or to understand and take action.’  Perhaps not enough for the politically uninvolved but a good enough starter for the rest of us.

The struggle remains to fight Brexit, which hasn’t ceased to be the reactionary threat to the working class it has always been.  ‘Get Brexit Done’ is another lie to join everything else associated with that project.  Lies are ultimately useless because sooner or later they collide with reality.  The issue is who pays for them.  If there is one saving grace from the result it is escaping the embarrassment of an attempted Corbyn Brexit.  The Tory Brexit will fail its supporters and Labour must fight it and all of its consequences, including the disillusionment that its ‘success’ will provoke.

The second is to demand and fight for a democratic Labour Party. The mass membership has proved to be right, even if only negatively, and it must be confident in saying so.  The debate about responsibility for the defeat is not a distraction from fighting the Tories but an indispensable requirement.  Get it wrong, or lose it, and that fight will be hamstrung.  What to do depends on what is accepted as what went wrong, and there must be no truck with those who want to deal with defeat by following those who either led it or caused it.  We don’t want to tack right in pursuit of nationalists and racists and we don’t want another Corbyn who didn’t know how to fight either.