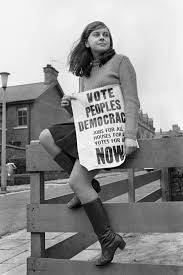 It has been noted in an academic study  of the flag dispute that “it has taken a unique political ideology to turn a clear ‘victory’ – a triple lock on the union,a change to the Republic’s constitutional claim, the signing up of Sinn Féin to ‘partitionist’ institutions – into abject insecurity.”

But insecurity in unionism is nothing new, thirty-five years ago a book on Protestant politics was entitled ‘Ulster’s Uncertain Defenders.” Uncertainty and political paranoia are inevitable when sectarian rights are based on proxies (such as bourgeois democracy) that either reject such politics implicitly or threaten to undermine it.  A demand for equality is especially pernicious since it appears reasonable but threatens loss when your claim to sectarian rights is necessarily based on inequality – every issue is zero sum game precisely because supremacy is what is being defended.

It leads to seeking justification for the claims of Protestants as a sectarian group, with its own anterior rights, and covering up for its sectarian and reactionary character. So, even when that Party has in the past defended civil rights (by their nature civil rights are not sectarian group rights) the Party claims that such rights were, and still are, not enough, because equality of poverty holds no attraction for Protestant workers.  What good is equality of misery it says?  What is required is a socialist programme.

But whatever justification there is for a socialist programme, which of course I support, and regardless of what this might look like, it cannot be advanced in order to obfuscate the opposition of many Protestant workers to equality per se.  It is not therefore the case that Protestant workers oppose a united Ireland because it may not be socialist. Their pro-imperialist, monarchist and reactionary politics makes the majority averse to socialism in any case.  The possibility that a united Ireland might in some way be socialist is against everything their political heritage defends, and is enough to guarantee the opposition of those who maintain allegiance to any specifically Protestant politics.

How can Protestant workers be won to socialism and the radical equality it promises if they do not accept the equality of Catholic workers in the first place?  Unless they accept the political emancipation of Catholic workers they will be unable to play any positive role in achieving the social liberation of the working class that includes themselves.  To believe that they can fight for the latter while opposing or even being passive to the former is to excuse their prejudice and undermine the possibility and meaning of socialism.  That this is also true of the perspective that Catholic workers must take is simply to state that sectarian division must be ended by mutual recognition by all workers of their equality regardless of religion or nationality.

It is still unfortunately the case that the majority of Protestant workers are attached to reactionary unionist politics, so that it is necessary for socialists to oppose both their unionism and their sectarianism.  There is an alternative political identity that must be fought for and is in their interests as workers, not as Protestant workers.

So, to employ episodes such as unionist opposition to the reduced flying of the union flag outside Belfast City Hall as justification for acceptance of limitations on one’s programme is to leave one defenceless against whatever reactionary veto unionist reaction decides to erect to any progressive change.

Loyalists now claim that it is Protestants that are discriminated against and it is they who are disadvantaged, and there is even some slight evidence of the latter.  The Northern Ireland Labour Force Survey recorded that over the period 1993 to 2017 the proportion of working age economically active Protestants with no qualifications has decreased from 30% to 12% while that of Catholics decreased from 32% to 11%, so Catholics were in a slightly better position.

It is a repeated complaint of loyalists that working-class Protestants, especially the young, are educationally disadvantaged.  In the same academic study referenced above the authors record interviews with loyalists and others that “the importance of education was stressed, but education with a very particular purpose, as a community project leader explained: We’ve got the programme there and it’s empowerment through education … once you teach them about their own identity then they understand what’s going on around them, cos I would say 100 per cent of our kids haven’t a clue about where they came from. “

“In the interviews we conducted the issue of Protestant/Catholic reconciliation did not arise unless raised by us [i.e. the academics]. It simply was not on any interviewee’s immediate agenda.”

“For those, within the PUL [Protestant/Unionist/Loyalist] community trying to re-build after the ruptures that opened up during the protest the key category is cohesion, not reconciliation. There was seen to be a strong imperative to build unionist unity, and to imbue young people with a deeper awareness of their unionist identity.”

The authors quote another academic study dealing with a small Derry town, which finds that loyalists “see no purpose in conflict transformation as their cultural identity is built on a glorification of sectarian conflict, and they reject democratic politics as ‘it did not stop the flag from being ripped down.’“

Yet another study based on North Belfast finds that even the Protestant church representatives did not talk about reaching out across the sectarian divide, but rather about: “The need to create a new confidence and a new identity around loyalism, one that was not demonised, and one that people could easily understand what it represented.”

In other words, these loyalists want to see reinforcement of their sectarian identity. Why would socialists, as the Socialist Party does, erect such views as the limit to a democratic and socialist programme?  The Party ends up deferring to those most bitterly opposed to workers’ unity on the grounds of supporting it.

Of course, not all Protestant workers are sectarian and for such workers it is reactionary to seek to win them to socialism by offering to accommodate a sectarian identity they either don’t have or can be more easily broken from.  But many are sectarian, to varying degrees, and it is only blind political correctness that prevents acknowledging the obvious.  Socialists will get nowhere by pretending it doesn’t exist, or that it is marginal, or in some sense justified, or must be deferred to in some way.  They will get totally lost if they hand over a veto to the most sectarian voices just because they advance protests and politics with which many other Protestant workers have sympathy.

None of this means we do not advance a non-sectarian and anti-sectarian programme, and a socialist programme.  We must do so, obviously because we are socialists and socialism is our goal – a society governed by the workers themselves.  But we must be clear what it means.

Escape into such truisms arises because real answers beyond such abstractions do not present themselves as obvious solutions, but as political programmes that offer particular courses of struggle.  James Connolly is famously noted for having denounced partition, but to end it means going beyond what he said –

“. . . the betrayal of the national democracy of Industrial Ulster, would mean a carnival of reaction both North and South, would set back the wheels of progress, would destroy the oncoming unity of the Irish labour movement and paralyse all advanced movements while it lasted.”

A role for those dedicated to the interests of the working class must mean that we are not paralysed.