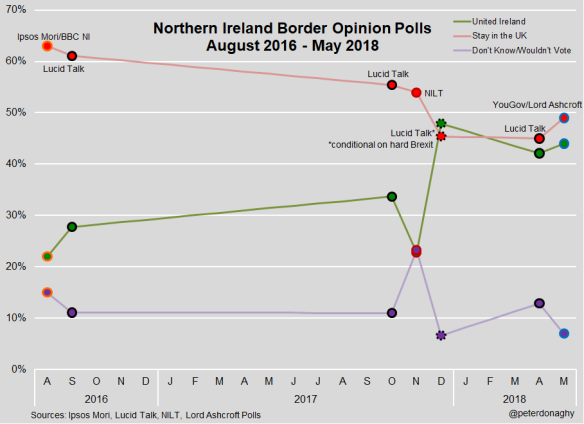 One consequence of Brexit has been louder demands for a border poll and the legitimacy of a test of support for a united Ireland, on the basis that Brexit breaches the Good Friday Agreement (GFA).

I have argued before that Brexit does not breach the GFA although it does exacerbate its failures and does involve increased tension between the British and Irish Governments, who are the custodians of the agreement.  It does catalyse increased instability and it does give rise to expectations that support for a united Ireland will have increased as a result. I have also argued that while this may be the case it is unlikely that a poll would result in a vote within the North for a united Ireland.

Nevertheless, the question arises whether socialists should support a poll, a question not only for us in the North of Ireland but for socialists in the South and for British socialists as well.  There is no such thing as a unilateral right to unification and this applies to those seeking unity with the South of the country and to those defending British rule.

The practical consequences of this are what matter, as has been demonstrated both by the Scottish referendum and the British Brexit referendum.  All the airy metaphysical nationalist claims can only get you so far, but as Brexit shows – even if you win – the hard reality of the real world will demand answers from your nationalist vision.

Recently the author and commentator Fintan O’Toole argued in his column in ‘The Irish Times’ that while the demand for Britishness remains in the North of Ireland (from unionists, mostly Protestants), the supply of it is in danger of disappearing (I paraphrase).

This is because opinion polls have shown that the most vehement supporters of Brexit in England, who most revel in the idea of some sort of continuing British imperial glory, would be prepared to lose both the North of Ireland and Scotland from their United Kingdom in pursuit of their beloved Brexit.

A few days later the unionist columnist Newton Emerson in the same paper argued, in a thinly veiled response, that actually it was remarkable that English Brexiteers had not shown more antagonism to their entanglement with the North of Ireland, given that it was the cause of the hated ‘backstop’ that appeared to be impeding a successful Brexit.  Of course, this assumed forbearance might have a number of causes and doesn’t refute the argument that O’Toole advanced.  In any case, it is very unlikely that the British State would seek to ditch the North of Ireland in order to save Brexit.

Newton Emerson also seemed happy to point out in his column in ‘The Irish News’ that while an RTE poll at the end of January showed 87 per cent of people would back a united Ireland over a hard border, this dropped to 54 per cent when the question was not framed by this stark choice.  He argued that ‘southerners are essentially soft-nationalist Alliance voters: they do not want a united Ireland without a united Northern Ireland’.  While there is some truth in the argument, it does not follow from the poll, and is not therefore ‘a fact’.

An RTE poll also showed that support for a united Ireland fell to 31 per cent if it meant paying more tax, which implies the desire for a united nation is to a great deal a sentiment that recognises practical constraints.  Whether these constraints are ‘fair’ or not is not the point.

So, both Irish and British socialists will be required to take a position on a border poll even if it is limited to within the six counties of Northern Ireland.  How should we respond?

In the last few weeks I have read two very different approaches.  The Socialist Workers Network in Ireland has presented this position:

“. . . all of the polls are consistent that support for a united Ireland is on the rise. That much we can be certain of.”

“This should be welcome news to socialists and progressives across Ireland. Partition is a thoroughly reactionary device, arising from a counter-revolutionary movement supported by British imperialism in order to set up a ‘carnival of reaction’, that has copper fastened two rotten states over the last century. And it is not just the physical divide between North and South that matters. Sectarianism exists, and is perpetually recreated, precisely because of the way that partition guarantees the maintenance of a sectarian state, that shapes every political question in a communal manner. We are opposed to sectarianism, then, but we also understand that sectarianism can only be overcome as part of a simultaneous challenge to the structures that enshrine it.”

Leaders of the Socialist Party, in an internal members bulletin, present a very different position. For them, a border poll has “the potential to push the north back towards sectarian conflict.” They note that in March 2017, the Assembly election “marked a turning point in the history of Northern Ireland.  For the first time since the foundation of the state unionist political parties no longer have a majority at Stormont.”

They then go on to say that “This is the context in which we operate and in which the calls for a border poll have become louder and louder. This is a dangerous development. A border poll does not represent a “democratic” solution to the division of Ireland and will not provide a “solution” in any sense. Protestants have the right to say no to being coerced into a united Ireland. If this coercion takes the form of a majority vote in the North it is still coercion, even if dressed up (in) ‘democratic’ clothing. In stating this publicly we are clear that we do not in any way ignore the rights of Catholics. It has always been the case that we take into consideration the intense desire for change of working- class Catholics and we recognise the positive side of this intense desire for change.”

They then ask “how do we reconcile what appear to be irreconcilable aspirations, and at the same time drive forward the struggle for socialism.”  Even a leading member of the Party, who writes in opposition to these leaders’ understanding of the politics of Sinn Fein, writes that “It currently plays a sectarian role in the North, including trying to coerce the Protestant working class into the southern State via a border poll.”

The general approach of the Party has been covered in a number of recent articles, (beginning here) dealing with its support for Brexit.  Its position in relation to a border poll expresses its general political approach, which is well expressed in a recent article that notes Protestant opposition to a customs/regulatory border in the Irish sea, which would be required for a Brexit that avoided a ‘hard’ border within the island of Ireland:

“The draft agreement outlines a scenario in which there will be a developing East-West border. This will inflame opinion in Protestant working class areas. The opposite scenario, in which there is a hardening of the North-South border, will cause anger in Catholic areas. Either “solution” is no solution, and will cause harm to the cause of working class unity.”

This position is based on the following considerations:

“Any East-West border, no matter how minor, has come to represent a threat to the union between Northern Ireland and Britain. If an agreement is voted through at Westminster which allows for East-West checks after December 2020 against the opposition of the DUP, there will be widespread anger in the Protestant community. In 1985 the Anglo-Irish Agreement was agreed between the governments of Margaret Thatcher and Garrett Fitzgerald without the involvement of unionist political parties. As far as most Protestants were concerned cross-border institutions had been undemocratically imposed on them and mass protests and an upsurge in violence resulted. In December 2012 widespread disorder broke out when a mere emblem of the “Britishness” of Northern Ireland-the union flag over the City Hall in Belfast-was removed. If there is a perception in the coming months and years that the British identity of Northern Ireland is being diminished street protests and street violence cannot be ruled out.”

In the next few posts I will review these two positions and present my own views.

1 thought on “Should socialists support a border poll? 1”