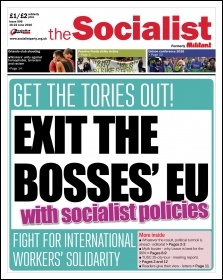 Following economic recession the second possible consequence of Brexit predicted by the Socialist Party is increased division and instability in the North.

Increased division on the island is of course inevitable, since that is the purpose of Brexit – to exit the arrangements that entail the existing unity of the European Union that includes the whole island.  On exit the UK will become a ‘third country’ and the only question is the degree of separation.

Given that left supporters of Brexit see the rules of the Single Market and Customs Union as so harmful to the interests of the working class it must be expected that the sort of Brexit they seek involves a high degree of separation and therefore a meaningful and significant border.

It  doesn’t matter that left supporters of Brexit blame the EU for this – the Socialist Party says that “after a hard Brexit the logic of the workings of the EU is that a hard border would have to be put in place” – the result is the same.  The Party states that “a Labour government should seek to re-open negotiations and demand an entirely different relationship with the EU, based on the interests of working-class people, not the 1%.”

One has to ask however – why would the EU, if it is the irreformable neoliberal construction that is claimed, strike an agreement in the interests of the working class, whatever that might be?  If it were possible there would seem to be little reason to leave in the first place.   Why not use membership to effect such changes for the whole EU instead?

But this is not the perspective of the Socialist Party, which is wedded to a very particular scenario of the way forward, which is “the necessity of a left government having to carry through a rupture with capitalism and adopting a socialist programme.” This “rupture” with capitalism is to be achieved through the “democratic public ownership of the key sectors of the economy”; i.e. through nationalisation supported by the mass activity of the working class.  This must be carried out by each state separately as nationalisation is by definition the action of an individual state.

This essentially nationalist approach to socialism lies behind the Party’s support for Brexit.  At the immediate level this perspective takes shape in the following expected results:

“Socialists in Ireland would welcome the return of a Labour government in Britain. If such a government were to adopt a position of socialist opposition to the EU this would transform the situation. Corbyn should speak over the heads of the Commission, reaching out to working class people across Europe in rejecting neo-liberal rules, calling for co-ordinated action for Green Energy on a Europe wide basis, and popularising a socialist vision of Europe. A left Labour government would be able to call on workers throughout the continent to fight the ‘race to the bottom’ in their own countries and mobilise against attempts by their own governments or the EU to pursue punitive measures against other workers whether in Britain or elsewhere.”

Why a left movement in Britain would be more powerful in reaching out to the rest of Europe’s workers by leaving the EU, instead of remaining and seeking unity of the workers’ movement across Europe, is unexplained.  But this is precisely what supporters of Brexit would need to demonstrate – why an exit was necessary and why it would be more successful in achieving wider European unity. How would leaving assist “co-ordinated action for Green Energy on a Europe wide basis” for example?

Unity of Europe’s workers, through its trade unions, works councils, political parties and workers’ cooperatives is possible but it is made easier by being within a common EU framework, in which Europe’s capitalist classes are seeking their own form of unity.  Only from a perspective in which the rupture with capitalism must first come from national governments in each individual capitalist state is it possible to simply assume without argument that international workers’ unity must follow this and not be immanent from the start.

So at an abstract level the Socialist Party maintains its international socialist credentials by considering such unity only as an end result after almost all the problems have previously been solved:

“Socialists are in favour of a genuinely united Europe. This will only be possible when the socialist transformation of society allows the coming together of nations of Europe in a democratic, European-wide confederation.”

The Party considers its approach to be consistent with the approach of the transitional programme as codified by Leon Trotsky.  This can be stated rather briefly as a programme fought for by a revolutionary party that starts from today’s objective conditions and from the existing level of consciousness of the working class.  It demonstrates through the demands raised in today’s struggles the necessity to take ever more radical measures that culminate in the working class seeing the need for, and being organised to achieve, socialist revolution.

This is the transition that the programme is meant to achieve, as opposed to demands that simply reform aspects of capitalism but do not fundamentally change it, and the maximum programme which demands this fundamental change through demands for socialism and socialist revolution.

There are lots of issues bundled within such a view, and lots of Trotskyists who would hotly dispute that the Socialist Party’s version is consistent with Trotsky’s programme, but that is not what I want to discuss here.  Rather it is to question how support for Brexit can possibly be seen as being part of any transitional approach.  I have written many posts on why I think socialists should oppose Brexit so the purpose here is a much narrower one and is confined to the role that supporting Brexit plays in the Socialist Party’s politics.

The first problem in the Party’s support for Brexit is that it then either abstains or is confused on just what this policy entails.  So it says that:

“We say that whatever way the different capitalist vested interests resolve their business dispute, it must be done without any physical or repressive borders.”

So having voted for a Brexit, to be determined by a reactionary Tory Government and EU bureaucracy, the Party leaves it for these capitalist interests to decide what it means, to ‘resolve’ the issues (within certain limits).  How does this engage the working class in seeking to impose its own solutions?

The view that a Corbyn led Government could simply re-negotiate all the bad neo-liberal rules away and leave the same market access is even more delusional than the Boris Johnson idea that Great Britain can get Johnny foreigner to allow it to have cake and eat it.  Does the Socialist Party really think Jeremy Corbyn could negotiate away the bad bits of the Single Market and customs union for the whole EU, or even just for the UK? And if it was just for the UK, would this not mean that there wasn’t really a Single Market? And if only for the UK, what then for the rest of Europe’s workers, including the Irish?

Would those Irish workers not within the UK have to await its own left government, one that is not on the horizon, before it too would attempt to copy any Corbyn success? Or would it not make a lot more sense for a left Labour government in the UK to fight within the EU alongside allies across the continent, including in the Irish State?

Since we don’t have a left Labour Government in Britain or the short-term prospect of one in Ireland, what is the policy that the workers movement should fight for right now to make Brexit a ‘good’ Brexit, or does silence on this indicate that one does not exist?

So, the first problem is that the Socialist Party has advocated a policy of Brexit for which it has no concrete idea how to give any progressive content.

In an instinctive reaction against their own sterility members of the Party have made a virtue out of their impotence and argued that no positive policies should be put forward in this situation, but instead only negative demands:

“Deliberately not putting forward positive demands, or advocating a particular arrangement post-Brexit, has been correct, and broadly remains correct however. There are issues on which it is not for the worker’s movement to come forward with solutions which address the concerns of the ruling class, and in the main this is one such.”

But of course, a content will be given to Brexit and it will be a wholly reactionary one, and it is really not good enough to vote for a reactionary policy, saying it is progressive and a step forward, and then be unable to build positive demands out of it and arising from it.

The final illustration that the policy of Brexit has no place in any socialist programme is that the Socialist Party is totally silent on the most obvious of questions.  If Brexit is the right policy for the British working class, indeed for all the workers of the EU, why does the Party not follow up on the ‘success’ in Britain and call for the Irish State to leave the EU as well?

It would appear no one in the Party wants to do this, but it is not because they all believe it is wrong. Instead they have saddled themselves with a policy that they dare not proclaim. Every argument defending Brexit and every claim that it is necessary is but another demonstration of the dishonesty of the Party to workers that it proclaims require its leadership – because it is not actually asking the workers to follow it.  It is not leading but hiding.

Once again, the political impotence of the policy is so clear that it cannot be replicated: the nationalist nature of it imposes its own logic regardless of the left illusions of its supporters.  There is no transitional content whatsoever.

Brexit has thus exposed fundamental flaws in the state-socialist programme of the Party, a programme which identifies socialism with state ownership and the route to working class power with governmental office.  Since the state is a nation state this almost inevitably involves conceiving of socialism, and the road to it, in national terms.  And so the Party gets it totally wrong when it comes to key international questions such as the European Union and Brexit.

In the final post I will look at the national question and how the Party’s policy on Brexit fails the challenge of uniting Ireland’s workers.