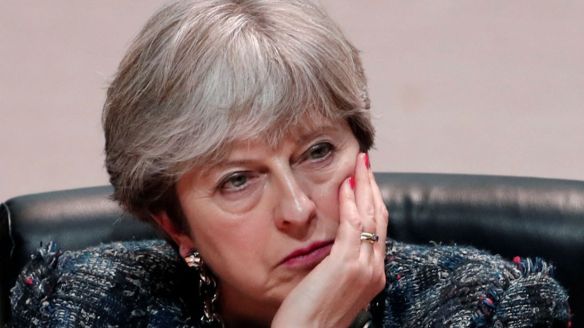 Supporters of Brexit claimed it would ‘bring back control’ and allow Britain to agree more favourable trade deals with the rest of the world.  It was also argued by some that a trade deal with the EU would be the easiest to agree and that the EU would rush to conclude it, such was the importance of Britain to the rest of Europe.

When the EU took control of the negotiations and stated that it wasn’t even going to discuss a trade deal until other matters were sorted first the illusions of the Brexiteers were exposed as fantasy.

So instead they threatened the EU with a no deal scenario – “no deal is better than a bad deal” they said, in a reformulation of the claim that the EU needs Britain more than Britain needs the EU.

Now we have Theresa May arguing that the draft withdrawal agreement must be supported because no deal would be so awful that it cannot possibly be allowed, and hers is the only alternative. Gone are the claims that a trade deal with the EU will be easy to agree, and so ridiculous is the notion that the EU will rush to agree one that no one even thinks to ridicule it.

Boris Johnson claimed that the EU could “go whistle” for their divorce money and Britain would “have cake and eat it”,but now the draft withdrawal deal requires that Britain pay its money, and more besides for the period of the withdrawal, although it does involve “have cake and eat it.”  It’s just that it is the EU that will have cake and eat it – the UK will have to accept its rules, and in various areas not regress from them; will have to continue to pay into the EU; will have to accept new rules agreed during the period of the deal, and will have a veto over any attempt by Britain to remove the Irish backstop that will remain until a new deal with the EU is agreed, sometime in the future.  And of course, any new deal will reflect the imbalance of power between the UK and EU which produced the draft deal.

So far is the withdrawal deal removed from ‘taking back control’ that this is its defining feature – that Britain will submit to rules and relinquishes any influence over them.  Britain will leave the EU through an interim deal that has been agreed because alternative deals have stupidly been rejected by the Tory Government as beneath it.

But the can has only been kicked down the road, so that fatal choices have only been postponed, and when they come they will also be framed by the same imbalance of power that has given birth to the withdrawal deal. In the longer term this will simply be unacceptable to British capitalism.

So the deal does not so much postpone a final Brexit deal as anticipate it, because any sort of final trade deal following Brexit will see Britain subject to the same forces that have resulted in this humiliation. Any fanciful notion that the USA or China will be more accommodating than the EU in a future trading arrangement belongs in the same category as ‘have cake and eat it.”  The decline of British imperialism, and its relative weakness, is laid bare and its competitors are not going to ignore it or let it pass unexploited.

No wonder it is on the question of control that those opposed to the deal have seized.  This weakness, which even ultra Brexiteers have cottoned on to in their own infantile way, is the only possible reason they are now calling for no deal as the alternative – because they can’t get a better one.

It’s why two leading Brexiteers, despite supposedly being in charge of the negotiations, have condemned their outcome.  Why all Brexit ministers have not resigned and why the detested Theresa May is still leader of the Tory Party and Prime Minister.  No one wants her job, or at least not now and not yet.

But what applies to the Tories applies equally to the Labour Party and its alternative, which gets more obscure by the day.  Any putative Corbyn deal is subject to the same imbalance of forces, and claims that it can deliver a ‘jobs Brexit’ become ever less credible as a result of Tory failure.

That this is the case is in itself a condemnation of the failure to oppose Brexit and explain that there cannot be a good Brexit, and that the best option was to continue to argue for Remain.  Had this been done the Labour Party could now claim some credit.

Instead it relies on the Tories cutting their own throat, and the continuing hopes among its members and supporters that at some point the Party will oppose leaving.  And while it has said it will vote against May’s deal, its claims that it can negotiate a better one appear wafer-thin and its rationale for opposing May’s deal just as slim.  It follows the ultra Brexiteers in its current defence of a possible good Brexit by condemning May’s draft deal because of its commitment to having to obey rules while having no say over them.

It’s rather like the incredible story in ‘The Independent’ in which a Tory Brexit MP slams the deal because Britain will have no influence in Europe and will have no MEPs or Commissioner!

And what of the supporters of Lexit, who must oppose the May deal on precisely the same grounds? While Tory supporters of leaving the EU thought Britain could gain strength from Brexit the supporters of Lexit thought it would weaken the British State, as it will, ignoring the effect this would have in weakening that state’s potential to carry out the anti-austerity and state-led development policies they support.

Unfortunately, both share the same illusion that national solutions are better than international ones and on this both are wrong.  The supporters of Lexit think a progressive British State can end austerity and be the motor of progressive economic development on a national basis, while Tory Brexiteers foresee a deregulated, free market tax haven on the shores of Europe.  Both ignore the fact that the rest of Europe doesn’t disappear just because Britain leaves the EU and that the EU will not allow a threat to it to develop in either left or right forms.

If the Lexiteers even got that far, which they couldn’t, they would suddenly find that they needed the rest of Europe’s working class to help them. And if they think that their example of splitting will inspire these workers then there won’t be a European working class to appeal to, just a collection of 27 other fragments of that class, all supporting their national roads to socialism, or nationalist xenophobic competition more likely, if they really did follow the British example.

It is no accident that today Theresa May has gone back to the most reactionary justification for Brexit in order to defend her deal – the idea that it will allow increased immigration controls that will apparently allow Britain’s young people to get jobs and training. As if it wasn’t austerity and Tory education policies that were the problem but foreign workers.

She has claimed that workers from the EU will not be able to “jump the queue”, except of course when the UK eventually, if ever, agrees a free trade deal with the EU, in which case the EU will want particular rights for its citizens.  The claims for Brexit never cease and never appear.

With this deal they have been postponed.  Promises made but not delivered, which will encourage true Brexit believers to rant ever more aggressively and their leaders to seek ever more scapegoats for their failure to deliver.

If the Tories, with the important assistance of the EU, were to succeed in pushing this deal through, the right-wing dynamic of Brexit would not be stopped or tempered but would continue to unfold. Hopes that a general election will lead to a Corbyn Government would place the burden of Brexit delivery on it, and without a policy of opposing Brexit such a government would have no mandate to reverse it.  Whoever in the Labour party thinks this is smart politics needs put out to pasture.

The Labour party should point to the current mess as the inevitable result of Brexit which is so bad the alternative offered by the Tories is only worse.  Only a fight to Remain can address the political turmoil by offering a way out.