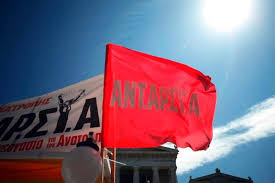 As I noted in a previous post, the debate in the Fourth International sometimes has a rather high-level and abstract flavour and the arguments of the majority and opposition often go past each other.  There appears no real engagement on what the differences signify.

However, the different approaches of the FI majority and the opposition come to the fore and are put to the test in two documents on the Greek crisis.  The lack of clarity and diffuseness of the main documents are left behind and the practical consequences of the alternatives are made more explicit.

The opposition document is written by the Greek section of the FI, which adds concreteness to discussion of events and assists in making an analysis.  In broadly accepting the evaluations of the forces involved and the significance of events taken, any alternative views of my own must rest on more general conceptions rather than an alternative understanding of the particular course of the struggle.

This means that my view must be seen as tentative.  This however is less important than it may appear since what I propose is a different view of the general strategic perspectives proposed.

The Greek section’s document asks a number of questions as a way of explaining its opposition to the FI majority’s ‘broad party’ policy and its particular expression in the shape of Syriza.  In doing so it counterposes building an independent anti-capitalist project ANTARSYA to the critical support offered by the FI majority to Syriza.

This review does not deal in detail with decisive issues such as the question of Euro membership, or the potential to limit, or repudiate the debt, or of whether socialists should have favoured nationalisation of the banks.  These are touched upon in other posts, including this one and the comments made to it.

The first question asked is – has SYRIZA been an expression of the rise of the social movement?

The reply of the FI’s Greek section is:

“Most international left people would reply “yes”, with no hesitation. SYRIZA represented the mass movement, and this is why we should have all supported it. However, this is not exactly true. SYRIZA did receive the majority of the votes of the working class and the poor strata, and this could not have happened if it wasn’t for the mass movement that developed in the country. However, SYRIZA was never organically linked with the movement. The party had always a very small membership, with particularly few workers and unionists. SYRIZA did never lead a single mass movement or workers’ strike, and its intervention in class struggles was always marginal. To present SYRIZA as a party of the mass movement is a myth. Its relation with the working class and the oppressed was a relation of electoral representation.”

The authors claim that Syriza’s electoral growth took place not during the rise of mass struggle but during its retreat, and that “one reason for this setback was definitely the easy solution that SYRIZA proposed: wait for the election to vote for a left, anti-austerity government. SYRIZA has not been an expression of the rising mass movement, but an expression of its fatigue and deceleration. And it has also been a reason for this deceleration.”

The second question posed addresses the crux of the matter – Was there any strategic alternative to the proposal for a left government?

The document states that “ever since 2011, SYRIZA has been declaring that the mass movement has shown its limit, and it is time to give a “political” (that is, electoral) solution. But no government can save the people . . . The calls of OKDE-Spartakos and other anticapitalist groups for generalized self-organization was confronted with skepticism or sarcasm by the majority of the left, who argued that it would be invented and utopian to speak of councils or Soviets in a situation where such things simply don’t exist. . . . “

“However, it was not true that self-organization structures did not exist. The Syntagma square hosted a daily people’s assembly for nearly two months. The assembly formed sub-committees charged with various tasks. A self-organized radio station was installed on the square. Several every-day popular assemblies were created in different neighborhoods of Athens and in almost all relatively big cities of the country.”

The text therefore argues that:

“It was possible to build an alternative proposal based on those, limited but actual and important, experiences of self-organization. It was possible to call for assemblies in workplaces as well. It was possible to propose that local assemblies elect their revocable representatives and turn the Syntagma Square into a national assembly. It was possible to explain that this assembly represents working people much better than the parliament and the government, and should thus claim power for itself. It was possible, even if very hard, to put forward a concrete revolutionary perspective. But SYRIZA could only fiercely oppose this perspective, and the Communist Part as well. The anticapitalist left did try, but it was still weak and not well prepared.”

The third question is less important but is a recurrent theme in the approach of building ‘broad parties’ – Was SYRIZA something different from a reformist party?

The text observes that “militants coming from revolutionary Marxism have developed a large spectrum of theories to deny the reformist character of SYRIZA before it took power, in order to justify their support to the party. They were those who saw an anticapitalist party in SYRIZA. Alan Thornett was definitely not the only one who could claim that “the leadership of SYRIZA wants to trigger the overthrow of capitalism.”

“A different idea was that SYRIZA represents a new kind of reformism where “bureaucratic crystallization is not as strong as it is in the leaderships of the Communist parties of Europe” and “it lacked links to the state bureaucracy.”

The text argues that “in relation to its small size, SYRIZA had a large number of long-time national or local deputies, municipal councillors, cadres in the state’s apparatus, in the administration of universities etc. The only reason why the party was not more actively involved in the management of the system is that it was very small, and nobody would offer them this opportunity. However, as soon as SYRIZA appeared ready to win the election, it immediately adopted entire sectors of the social-democratic state, local government and unionist bureaucracy. As for its will to manage the system, there was nothing exceptional in the reformism of SYRIZA.”

The Greek section therefore sees itself justified in rejecting criticism by the FI majority that “”the comrades of the KKE and ANTARSYA made an elementary error in seeing SYRIZA’s proposal for a left government as something that would simply manage capitalism.”

So the next question posed by the Greek section is – would the election of a left government bring self-confidence and combativity to the people?

The text quotes a comrade of the majority that a “Syriza-led anti-austerity government of the left” would be “a workers’ government in Marxist parlance”, “a pre-revolutionary situation could quickly emerge if Syriza is elected and implements its programme.”

However, the Greek section states that “No progressive reforms or “emergency” measures were implemented. SYRIZA’s broken promises did not bring combativity, but disillusionment and confusion. Passivity and parliamentary expectations, both nurtured by SYRIZA and its supporters, had rendered the people unprepared for a new round of strikes. The resistance of the working class against the introduction of the 3rd austerity pact (memorandum) in July 2015 was weaker than the one against the 1st and the 2nd memoranda. The situation got worse afterwards. . . .  it is undoubted that the SYRIZA government did not favor workers’ mobilization. On the contrary, it was the government that managed to restrain, and thus suppress, social and workers’ reactions more than any previous one amid the crisis.”

The text further argues that “one of the innumerable arguments that always concluded that everybody should support SYRIZA is that, if SYRIZA fails to deliver on its promises, its base will revolt and follow the left wing of the party. People would trust the left wing more than the anticapitalist opposition outside SYRIZA, because it is with the former that they have fought together for years. A very old and dogmatic concept was repeated here: revolutionaries should stand alongside the working class in labour parties so as to gain their trust, and be ready to lead them out of those parties when the leadership betrays them. However, SYRIZA was never a massive party, with a vivid internal life and strong bonds between the leadership and the rank and file. The period is not the same anymore, neither are parties. The above abstract scenario failed altogether.”

Finally, the document dismisses claims that the FI (and other left organisations) did not support Syriza, and rather uncritically as well.  It complains that “no balance sheet was ever drawn of this huge mistake” so that the FI “avoids the main conclusion: the need for political and organizational independence from reformism.” 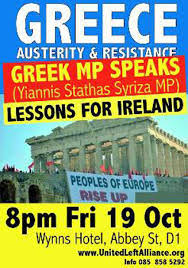 In the next post I will look at the reply to this analysis by the FI majority.

Forward to the second part here