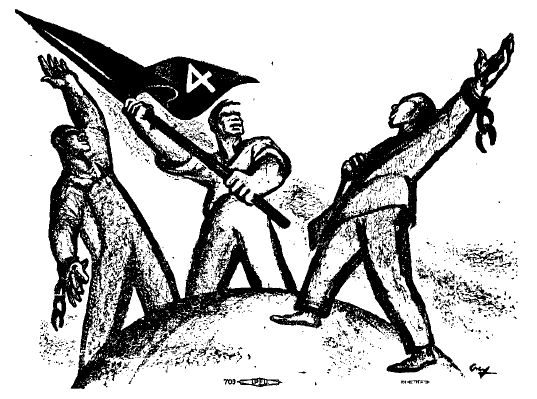 The documents of the opposition to the leadership of the Fourth International have the benefit a greater clarity of exposition. In their document ‘Let’s seize the opportunities, and build an international for revolution and communism’ the opposition criticises the majority line of building broad parties “without clear programmatic and strategic boundaries”, leading to betrayal of the traditional revolutionary programme of the International.

Thus, they point out that in Italy for example the “FI comrades supported in Parliament the formation of a Prodi government and voted for the war budget.”  Furthermore –

“Our ability to defend either the principle of class independence or to maximize the ability of our social class to act independently from the bourgeoisie and its State, is undermined when support is given to a politician linked to a bourgeois party, like Bernie Sanders, or to a personality with no ties to the labour movement, like Pablo Iglesias.”

Through this mistaken policy of the FI, the opposition argues that the majority “implicitly gave up on the relevance of revolution, seeing it as something to be accomplished in the distant future.”

It is not however clear to me that the opposition document makes any more convincing case that (their conception of) revolution is more relevant today, or in the short term, than that of the majority.  Small organisations without the participation or support of the mass of the working class bring the reality of revolution no nearer if they have no means of making their revolutionary programme the activity of the working class itself.

As Marxists, and therefore laying claim to a theoretical understanding superior to that of the mass of reformist (at best) workers, the opposition text should set out what the preconditions for socialist revolution are, and how Marxists might contribute to the working class accomplishing such a revolution.  But these preconditions appear to be assumed rather than explained.

Assertion of working class independence is fine and many of the criticisms of the experience of carrying out the majority perspective are true, but the traditional programme put forward by the opposition is presented in abstract terms and for Trotsky a programme must be concrete and have practical relevance.  I have addressed this problem before – here, here and here – so I will not repeat the arguments there.

The document fails to explain what independent working class politics means in a period like today, which is decidedly not a revolutionary one, or to be more specific, not one in which the working class in its majority seeks to conquer political power.

The problem that I pose is not one that the opposition would probably recognise, for they see the working class coming rapidly to political consciousness out of capitalist crises and the mass action prompted by such crises.  In the document they explain their conceptions, which are the traditional ones of many Marxists.  So, let’s look at what these are.

The opposition states that “We do not share the current FI leadership’s appreciation of the current situation. While it does feature an increasingly violent onslaught by the bourgeoisie, it is nonetheless contradictory and holds possibilities for revolutionary communists to be heard and to gain strength.”

It must be said that the last part of this involves a weak claim and one rather solipsistic.  No explanation is given as to how the mass of workers will come to socialist political consciousness, although it might be inferred this is a result of “revolutionary communists” being heard and gaining strength, that is, mainly through propaganda.

The epochal task of transforming the capitalist mode of production to socialism is however reduced to building an organisation that is currently without significant influence.  How this might be expected is unexplained.

One is left with an impression similar to that of listening to bold and incredible religious claims – the more enormous the claim the more requirement there is to provide equivalent justification for it.

The main opposition text asserts that the tendency for the rate of profit to fall is at the root of the capitalist crisis but this is neither proved, nor is it necessary.  In the document, it is implied that the capitalist crisis will not be escaped from spontaneously but through a historic defeat of the working class. The assessment is therefore incapable of understanding the massive growth of capitalism over the last period, which is reflected in the document’s own acknowledgement that:

“In fact, the working class is globally more numerous today than ever. In South Korea alone there are as many wage-earners today than there were in the whole world at the time of Karl Marx. The working class, which in our view is composed of wage workers who do not exercise management power, today constitutes between 80 and 90 per cent of the population in the most industrialized countries, and almost half of the total global population.”

“Globally, the number of industrial workers worldwide went from 490 million in 1991 to 715 million in 2012 (ILO data). Industry even grew faster than services between 2004 and 2012! The industrial sector did not shrink, but the agricultural sector did, from 44 to 32 per cent of the global workforce.”

But this incredible growth could only happen through rapid accumulation of capital, which makes a nonsense of any claim that capitalism has been in more or less permanent crisis during this period.  How could such accumulation have occurred with a declining rate of profit?  Either it did not fall or a fall does not reduce massive accumulation of capital.  Neither of which is a comfortable view for those making the argument.

A large number of the authors are Greek and it is understandable that the crisis conditions in that country may have coloured conceptions of the world capitalist system. But Greece is not the world and the world is not Greece.

What the authors have confused is the ever-present contradictions of capitalism, with its exploitation, oppression and inequality, and its tendency to war and violence, with capitalist crisis.  The former exist, even when capitalism is booming, in fact such things as exploitation must increase in such circumstances, but this does not mean capitalism is in crisis, as if a non-crisis capitalism entailed peace, equality, and humane and genial progress.

The problem with capitalism is that even when it achieves progress it does so through brutal oppression and exploitation, and yes, through recurrent crisis, which is how the system resolves temporarily some of its contradictions, only to create the basis for further crises in the process.  But this isn’t the same as crisis as understood by the document, which is one that calls into question the reproduction of the system.

The authors of the document note that:

“By reorganizing industry worldwide, capitalist globalization created new working classes in the southern countries, whose potential was shown by the recent mobilizations: the wave of strikes happening in China since 2010, the 2015 massive strikes in Bursa, Turkey, the formation of mass militant unions in Indonesia, the role of the union movement and of mass strikes demanding the resignation of South Korea’s Prime Minister in late 2016.”

“we also see the renewed interest in socialism illustrated by Jeremy Corbyn’s double leadership victory in the British Labour Party, and the renewed interest in socialist ideas in the United States. All these signs indicate that the elements for anti-capitalist awareness are present. It is, nonetheless, a very uneven and limited process. Currents hostile to socialism are reaping the fruits of the deep discontent. The electoral audience of the FIT in Argentina, the recomposition of the union movement in South Africa, despite the limitations of both experiences, and above all, the renewed interest in “socialism” in the United States indicate that anti-capitalist ideas can acquire a mass audience.”

The document notes that they need to build the labour movement independent of the official union leaderships, and so capable of self-organisation.  But they state that the “elements for anti-capitalist awareness” that are present are “very uneven and limited’, that anti-capitalist ideas “do not yet have “a mass audience” and the type of labour movement they seek has yet to be built.

So, we have recurrent capitalist crises.  We have huge growth in the size of the working class and the creation of new working classes across the globe with enormous potential. We are told that the elements for anti-capitalist awareness are present (but not what they are), while anti-capitalist ideas “do not yet have “a mass audience” and the type of labour movement sought has yet to be built.

We are also told that there is “an increasingly violent onslaught by the bourgeoisie”, and one that is usually considered to have gone on for years, with more than a little success.  Yet one other, it would seem, is that the current, more or less immediate, relevance of socialist revolution has not diminished.