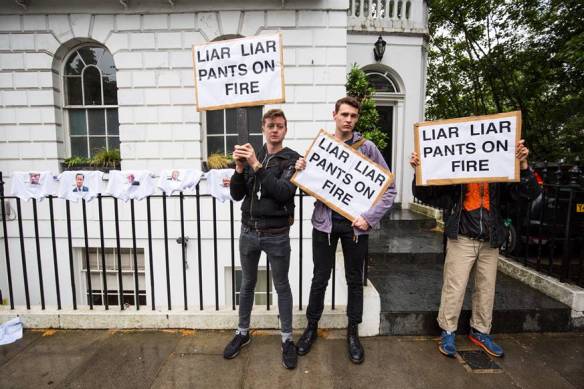 Watching and listening to the BBC yesterday I was presented with a master class of political spin that would put the worst dictatorship to shame.  The best propaganda isn’t uniform and obvious, peddling straightforward lies, but invites you to look at things differently, to think yourself into a view that you may treat as your very own.

So I listed to PM on Radio 4, looked at the BBC News web site and watched the BBC six o’clock news on television.  The lead item for two was the revelation that Boris Johnson had lied when he said he had been told categorically by Porton Down laboratory that the poison that infected two Russian citizens came from Russia.   In fact, the official response from the Porton Down spokesman was that they couldn’t say.

This was picked up by Jeremy Corbyn, who rather charitably said Johnson had exaggerated and had questions to answer.

The BBC could have run with precisely how the Foreign Secretary had lied, why he had lied and what were the consequences of his lying, particularly given his senior and sensitive position in government.  A backstory could have been filled with Corbyn having taken a more measured approach and having a track record of getting these international issues right, while Johnson had a history of lying.  The great British public could then have been invited to form its own opinion.

Of course, no one who gets their news regularly from the BBC would have expected anything like the above.

Instead we were invited to believe that Johnson ‘appeared’ and might ‘seem’ not to have told the truth, while on the six o’clock news I remember hearing three responses by Johnson to the charge that he lied with the accusation repeated that Corbyn was playing the Russian’s game.  The BBC reporter took the view that it was all a bit of a mess, which given the BBC coverage was actually an accurate portrayal of the way the issue had been presented.

On Radio 4, the BBC talking head was deploring, more in sorrow than in anger, along the same lines but majoring on how the Russians would gain and we (as in Britain) would be put on the back foot by this disagreement between the two British political parties. This was the issue – the whole thing didn’t make Britain look good.  Rather like a person accused of rape; the issue is not whether that person actually did it, and what effect it has had on the victim, but that it doesn’t make them look good.  Pick your own crime and you could repeat the example a thousand times.

On Radio 4 the lead item was wrapped up in the first 15 minutes by an American ‘expert’ who had worked with various intelligence agencies, who reassured us that of course it was the Russians.  So, with the issue being that it was, at the very least, questionable to blame the Russians without evidence, the news item finished with yet another example of the very same, from someone whose bona fides were rather obscure.

When we consider that on the same day the Foreign Office deleted a tweet that claimed what Johnson had claimed – that it was the Russians who were the source of the poison, it seemed rather lop-sided to allow Tory spokesman to avoid the question of lying and simply declare without challenge that of course it was the Russians – who else was going to do it? Well, perhaps the BBC could have taken this question more seriously too?

The explanation for the original tweet, that it was truncated and did not accurately report “our ambassador’s words”, looked lame, particularly when the official transcript of the speech from which it came said the same thing as the tweet. Yet another question that should have been posed by the BBC but was ignored.

The narrative the BBC presented was therefore not one of lying by the Government, and embroiling us in heightened international tensions that had the happy circumstance of diverting attention from Brexit and another Tory reverse.  Instead we have had just a bit of a mess and only the Russians will gain from any controversy; which of course conveniently absolves the BBC of doing any real reporting, of news as opposed to certain views, of the establishment in particular.  And anyway, it was the Russians what done it.

But as we see, the real propaganda value of the BBC coverage is not in what it says but in what it doesn’t – in its highlighting the questions it thinks are important and to which we are invited to divert our attention, and the questions and issues that are ignored.  Lies by the Government while the perceived radical opposition leader is proved correct again?  Such a narrative would obviously be anathema to the BBC and its lofty self-perception of balance.  Just a pity this lofty approach doesn’t touch the truth.

Should we demand that the BBC really be impartial?  Well, it is useful to point out as loudly as possible its bias when it is particularly ourageous.  But why would it be expected the broadcasting arm of the British state would stray from the rest of it?

Perhaps instead we should secretly welcome the BBC when its bias becomes egregious; all the more likely then that more people will notice it. And perhaps do what we say we should always do – try to create an alternative.