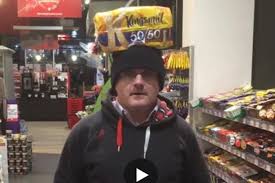 News in the North of Ireland for over a week has been dominated by the controversy created by Sinn Fein MP Barry McElduff, who posted a tweet of himself with a loaf of Kingsmill sliced bread on his head in the shop at a service station.  He’s regarded as the Sinn Fein clown but nobody was laughing, at least not publicly, as he posted his video at 5 minutes past midnight on the 42nd anniversary of the killing of ten Protestant workmen by the IRA, at Kingsmill in Armagh.

He was roundly condemned and Sinn Fein suspended him from his post for three months, which was generally regarded as a weak admonition.  Unionists roundly condemned the photo and the punishment and contrasted one republican’s behaviour and the party’s mild rebuke with the recent Sinn Fein demand for equality and respect.

McElduff complained that he had not been aware that there would be any link between his tomfoolery and the massacre but some argued that it was too much of a coincidence.  My own view was that it was crass but couldn’t see the point of a republican drawing attention to something Sinn Fein would wish forgotten and which the IRA at the time would not admit.

What was more important was that the killings had actually taken place and had not been politically accounted for by those who carried it out and who are now claiming the mantle of reconciliation.

The sectarian slaughter was so appalling there was no admission of responsibility and, despite years of demands by republicans for a truth process, they still haven’t done so and aren’t going to.  Six members of two Catholic families had been murdered by loyalists the day before the Kingsmill massacre, and Kingsmill was carried out and widely seen as retaliation.  A classical tit-for-tat killing designed to deliver a message that we can also do what you can.

I remember that, perhaps five years later, a republican supporter defended the massacre to me on the grounds that it stopped the sectarian tit-for-tat killings.  This was the view of republicans at the time and no doubt still the view of most of those old enough to remember it now.

A also remember a comrade of mine once saying that the IRA fought a campaign that sometimes involved sectarian killing while loyalists fought a campaign that was sectarian killing. That many of the unionist politicians today complaining about the behaviour of McElduff are still today collaborating with loyalist paramilitaries up to their necks in criminality and with a record of sectarianism no republican could match makes their protest and grievance easy for many to dismiss.

The media controversy didn’t die, partly because it suited unionist purposes, and partly because it really does put a big pall over the republican ‘equality and respect’ agenda, with the video conjuring up the view that sectarian killing is a joke.  In the North the controversy will not significantly dent Sinn Fein support, but it just adds to the cynicism and/or calculated ignorance required to continue that support.  While always stating their republicanism could not be compared to loyalism, the retreat to what-about loyalist hypocrisy admits of such comparison. It is a defence, but only at the expense of embracing your enemy and sharing the same unwanted spotlight.

In the South, things are different.  It is now being argued that the resignation of McElduff after the mild rebuke of suspension has not been voluntary but demanded by Sinn Fein, especially Sinn Fein in the South, for whom association with the past deeds of the IRA really is a shackle they seek to escape.

This might seem the worst of all options for republicans – refusing to take strong action that might demonstrate they have changed and recognising  their responsibilities, while losing their colleague anyway.  But this is not how it works.  He’s gone; they can welcome his decision and move on.  Just like the original massacre – admit nothing, while sending a message, and hope to move on.

Like seemingly every major atrocity during the ‘Troubles’ the spectre of the British state’s involvement has also been raised by the controversy and as usual relegated in importance.

Police failure, seeming incompetence in investigating the case and suspicions of collusion, with no one charged over the killing, has raised again the issue that the IRA and loyalists seemed often to be almost puppets of agents working in the bowels of the British State.  That this was the case for much of loyalism can hardly have been doubted, though seldom admitted, but the state penetration of republicanism has been much more surprising.

In truth, there is little new in the episode because nothing has been revealed that we didn’t know already.  It will not affect the current political stalemate in the North and in the South every step away from its past renders the new Sinn Fein closer to a pale imitation of the rest of staid Irish nationalism.  Those coming from a republican tradition are devout in their remembrance and commemoration of the past but they seem incapable of learning from it.

Far from facing its history and learning its lessons they forget nothing and learn nothing because they either seek to repeat the same strategy today or defend the strategy applied yesterday. In any circumstance it would be a failure today as it was before.

The episode is seen as showing the barriers to reconciliation existing in the North but the columnist Brian Feeney of the Northern nationalist paper ‘The Irish News’ is right when he says that reconciliation is a religious notion that is a chimera, one that hasn’t, isn’t and won’t exist.  What is actually being demanded is reconciliation of incompatible claims coming from different sides while the respective validity of these different sides is also paradoxically affirmed.  The complete incoherence of the equality of sectarianism that passes for political progress here is on show once more.

What is required is not reconciliation of two sectarian sides but unity across sectarian division that through this unity dissolves it.  Irish republicanism has failed this task, which it once set itself over two hundred years ago, and no one really expects it to have much to do with achieving it now.

1 thought on “Remembering or forgetting the Kingsmill massacre?”