Marx’s alternative is undoubtedly the most radical alternative to capitalism, which can mislead some to reject it on the grounds that it must therefore be utopian.  Years of reaction have drastically reduced expectations among those who oppose the worst aspects of capitalism and much of the anti-capitalism of the last few decades has not actually been anti-capitalist at all, never mind socialist.

In fact, it is the far-reaching character of Marx’s alternative that makes it a real alternative because it is based on capitalism’s own revolutionary character, a character that encompasses its civilising mission and the repeated crises that demonstrate its contradictions and potential for replacement.

The depth and comprehensiveness Marxism seeks is both a barrier to its initial acceptance and absolutely necessary in order to understand its presentation of an alternative to capitalism.  Many come to reject capitalism through its immediate exploitation and cruelty, through appreciation of its inhumanity and destruction, understanding this opposition in terms of moral judgements that stand apart from the crude and degrading material requirements of the system.

Marxism by contrast starts from these material requirements, ones that are required of any social system, but which take a particular social form within capitalism.  It seeks to understand both requirements and particularly how the working of capitalism paves the way for its supersession.  Marxists do not therefore condemn capitalism only for its cruelty, destruction, exploitation and inhumanity, but also because, in its development of the needs and capacities of humanity, these are in turn restricted and disfigured by it, when capitalism itself has created the grounds for all these needs to be met and capacities to be developed.  If this were not the case there would be little point in opposing an exploitation or oppression that was inescapable and could not be replaced.  At the same time, Marxism realises that what is required is replacement of the system, not mere adjustment or reform.

Exploitation and oppression is built into the structure of capitalism, and is at the core of Marx’s understanding of historical development including the development towards socialism.

For Marx “History does nothing, it “possesses no immense wealth,” it “wages no battles.” It is man, real living man, that does all that, that possesses and fights; “history” is not a person apart, using man as a means for its own particular aims; history is nothing but the activity of man pursuing his aims.” (Marx and Engels ‘The Holy Family’).  And by ‘man’ we should understand all of humanity.

This means that both the oppressive and civilising characteristics of capitalism are not something disembodied, inflicted upon humanity from without.  Both aspects arise from the actions of humanity itself resulting from the form of society inhabited, given to it and which it only imperfectly understands.

“Man can be distinguished from animals by consciousness, by religion or anything else you like. They themselves begin to distinguish themselves from animals as soon as they begin to produce their means of subsistence.”(Marx and Engels ‘The German ideology’)

Humanity is therefore ‘a tool-making animal’.  Direct and individual acquisition, or appropriation of naturally occurring items, that can be consumed directly by nonhuman primate populations, differs from the social production through the expenditure of energy among human populations. This capacity comes to define and redefine human organisation.

“Labour, then, as the creator of use-values, as useful labour, is a condition of human existence which is independent of all forms of society; it is an eternal natural necessity which mediates the metabolism between man and nature, and therefore human life itself” (Marx, Capital Volume I). People must work no matter what type of society they live within; how they do this defines the human community within which they exist.

Those that work with nature to ensure the continued existence and reproduction of humanity, at whatever level of development it has achieved, act upon external nature and change it, and in this way simultaneously change their own nature.

“When the worker co-operates in a planned way with others, he strips off the fetters of his individuality, and develops the capabilities of his species.”  (Capital Volume I)  For Marx, humanity, in the shape of those who work, who will liberate it from oppression and exploitation, “must pass through long struggles, through a series of historic processes, transforming circumstances and men.”

Of course, if they do not, workers can become “apathetic, thoughtless, more or less well-fed instruments of production . . . degraded to one level mass of broken wretches past salvation.”  We constantly come across the extremes of both: working people who inspire and those whose apathy and ignorance dismays and demoralises.

However, it is work itself, which by definition working people must by and large perform, which forces upon them, by necessity, considerations that can lift them above apathy and degradation.  Work is therefore central to how human society is structured, how it reproduces itself, how it develops new forms, how it understands itself, and how it can change human perceptions and desires for potential new forms of social organisation.

So, what is particular about human labour?  “[Let us] presuppose labour in a form in which it is an exclusively human characteristic. A spider conducts operations that resemble those of a weaver, and a bee puts to shame many an architect in the construction of her cells. But what distinguishes the worst architect from the best of bees is this, that the architect raises his structure in imagination before he erects it in reality. At the end of every labour-process, we get a result that already existed in the imagination of the labourer at its commencement. He not only effects a change of form in the material on which he works, but he also realizes a purpose of his own that gives the law to his modus operandi, and to which he must subordinate his will. And this subordination is no mere momentary act. Besides the exertion of the bodily organs, the process demands that, during the whole operation, the workman’s will be steadily in consonance with his purpose. This means close attention. The less he is attracted by the nature of the work, and the mode in which it is carried on, and the less, therefore, he enjoys it as something which gives play to his bodily and mental powers, the more close his attention is forced to be” (Marx, Capital Volume 1) 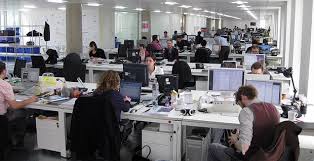 To the extent that the worker is compelled to labour for a purpose that is not hers, that she may even oppose or detest, such labour is against her nature as a conscious being and her freedom to express her consciousness in whatever way she wishes.  Her views and awareness of compulsion and lack of freedom, which she will see as inhuman and against her human nature, may lead to resistance and ultimately revolt against such a society that entails such constraints.

Since labouring is a social activity – no one can or does work alone – the rebellion by a worker against the drudgery and oppression of work reflects not just the constraints on the realisation of this worker’s own purposes but the purposes of everyone with whom she works, the purposes of her fellow workers, and in an extended sense of all those who work, the working class as a whole.  This is true whether she is conscious of her membership of a class or not.  Thus does capitalism, at a very basic level, engender opposition to its inhuman workings.  The more accomplished its civilising role has been, the more conscious will workers be of constraints and more capable of seeking to remove them.

This recognition of the most fundamental need of people to work together upon nature to ensure their existence at whatever level of development they have reached is sometimes viewed as so fundamental that it has no specific or practical significance for understanding contemporary problems and issues.  But a moments’ thought disposes of this.

“All production is appropriation of nature on the part of an individual within and through a definite form of society.”  “Human life has from time immemorial rested on production, and, in one way or another, on social production, these relations we call, precisely, economic relations.”  So not just the products of labour, or how that work takes place, but also the form of society itself is determined by the relations in which people come together to labour in production.

Unemployment, the threat of it and insecurity it evokes; the lack of decent work and of low pay; of poor conditions, pensions and welfare rights; of zero hours’ contracts, food banks and reliance on benefits; the allocation of the labour of society that does not value or provide for sufficient health and education.  All these aspects of society are simply elements of how humanity allocates its labour in order that humanity maintain its existence in the fashion that it has been born into. How people work and produce together is therefore fundamental.  For Marx material production “is the basis of all social life, and therefore of all real history.” (Capital Volume 1 p 286)

Marx describes the general process in his booklet ‘Wage, Labour and Capital’:

“In the process of production, human beings work not only upon nature, but also upon one another. They produce only by working together in a specified manner and reciprocally exchanging their activities. In order to produce, they enter into definite connections and relations to one another, and only within these social connections and relations does their influence upon nature operate – i.e., does production take place.”

“These social relations between the producers, and the conditions under which they exchange their activities and share in the total act of production, will naturally vary according to the character of the means of production. With the discovery of a new instrument of warfare, the firearm, the whole internal organisation of the army was necessarily altered, the relations within which individuals compose an army and can work as an army were transformed, and the relation of different armies to another was likewise changed.”