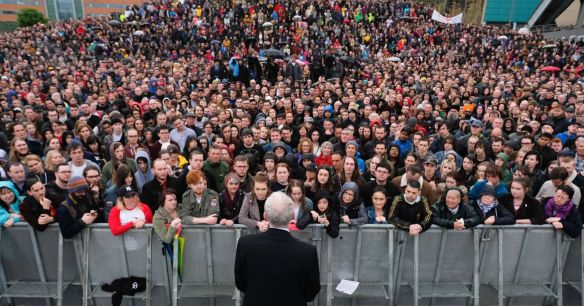 It’s only when you consider the situation on 18 April that you can truly appreciate the dramatic advance taken by the British working class during the general election.  Theresa May called the election when the Tories had a poll lead of over 20 percentage points and when her personal approval ratings were even higher.

It followed a Brexit referendum that had unleashed a wave of xenophobia and racism which the Tory Party planned to milk in order to crush and overwhelm any opposition.  We would then face Brexit negotiations where every rebuttal of Tory Brexit delusions would be used as an opportunity to whip up anti-foreigner rhetoric that would cement Tory hegemony.

Now that strategy lies in tatters, that project is in chaos and the initiative lies not with Brexit reaction but with a left-wing counter-offensive.  Far from being the impregnable leader and worthy inheritor of the mantle of the “Iron Lady”, May has rather quickly become a figure of fun.  In the campaign “Strong and Stable” came to be considered as the first words of a child – repeated endlessly in all the most out of place circumstances.  Maybot became the battery-driven toy that bangs into the wall and continues to bang into it because it cannot know any better.

Instead of the Tories’ Brexit hero, one Tory MP has described her thus – “We all fucking hate her. But there is nothing we can do. She has totally fucked us.”

The most important point of this little articulation of Tory comradeship is the bit where he says “but there is nothing we can do.”  Labour is now ahead in the polls and the Tories are terrified of another election that they simply can’t go into with Maybot in charge.

So how did all this happen?  First, it’s necessary to accept that the Tories huge lead in the polls was not a mirage, even if it may not have been so commanding as it appeared.  The polls were correct to show a narrowing of the Tory lead as the campaign went on and while some were ultimately more accurate than others, all showed an initial huge lead that in previous general elections would have meant a certain Tory victory.

The answer lies in understanding that Jeremy Cobyn’s success shows the correctness of the Marxist conception of politics, even if this was proven by a non-Marxist party.  In contrast, the media pundits have been floundering and cruelly exposed, not that you would have noticed it.  With a brass neck a blow-torch couldn’t mark they simultaneously expressed shock at the result and know-it-all opinion pieces on how they got it wrong.  As the saying goes: opinions are like assholes – everyone’s got one, although it’s not everyone who expels such quantities of shite.

Even after the vote I came across this from the ‘Financial Times’ lead journalist covering the election.  When speaking of a possible Tory-DUP coalition he writes – “But all coalitions, formal or otherwise, require horse trading and compromise – something May is not naturally suited to. Her trademark skill is to decide on a policy position and stick it to.”  Bias becomes so ingrained it becomes an unthinking habit that kicks in when the world is not as you believe it is and you are unable to process the meaning of events.  Thus you end up with nonsense like this.

Now the media is attempting to undermine Corbyn by giving space to those Blairites and soft left figures in the Party who got it so spectacularly wrong but now claim that having won the left vote he now needs to tack to the centre.  While some of these people just denigrate his achievements others offer praise only to bury him later.  Meanwhile the media want to know is he going to give these losers prominent posts in the party now that their plans for another coup or for setting up a rival organisation are blown out of the water.

The election showed the impact of media bias and the effect of the relaxation of such bias that general elections allow. Election coverage means less filtered access to the policies and personalities of the parties so while Corbyn soared, Maybot tanked.  That the bias continued during the campaign also confirmed the limits of mainstream media spin.  It remains a barrier but one that can be overcome.

More importantly the elections showed the importance to politics of political programme, political leadership and mass mobilisation of workers.

For the first time in decades, and the first time ever for many younger voters, there actually appeared to be a difference in the policies being proposed by the different parties.  There can be no denying the impact and importance of the Labour manifesto; it became a reference point that exposed the vacuity of the Tory ‘alternative’ and its policies became the content of the campaign day after day.

It became the meat in the sandwich of the slogan ‘for the many not the few’.  It set out exactly what the Party’s policies were, which people could consider and make up their mind about, and made for something positive that they could read about or hear presented in television debates.  Presented properly it shone like a beacon set against inane Tory slogans and an empty Tory manifesto whose few policies that grabbed the headlines were either ditched quickly (sort of, like the dementia tax), were unpopular and divisive (grammar schools) or evoked a WTF reaction (foxhunting).

That the policies were presented properly was because of the Corbyn leadership.  He dominated the Labour campaign for the right reason, that he personified these policies and the principles that they were intended to proclaim.  As people got used to him his presentation became both better and less important as people didn’t expect slick presentation à la David Cameron and concentrated on what he said rather than on how he said it.

Early opposition by the most incorrigible Blairites more or less dissolved as the instinct for self-preservation kicked in and the BBC etc. realised it would not be possible to give equal coverage to the policies presented by the Conservative Party and the uselessness of Jeremy Corbyn as presented by the majority of the parliamentary Labour Party.

Only near the end of the campaign did more and more talking heads acknowledge the staying power of Corbyn and his attraction for many young people, and older Labour voters who had previously given up on Labour due to its Tory-lite policies.  Most of all, they were forced to acknowledge the massive enthusiasm his campaign had generated even when they covered two men and a dog ‘rallies’ by Maybot and ignored rallies of ten thousand held by Labour.  Despite paper talk that Labour candidates would fight local campaigns while claiming Corbyn was ‘nuthin to do with me guv’, it more and more became clear that a vote for the Labour Party was a vote for Corbyn and more and more an endorsement of his leadership of the Party.

Finally, the generation of a mass campaign, whose most prominent features were the Corbyn rallies, had an effect way beyond the large numbers attending.  Speaking in Scotland made the Scottish Labour Party relevant and his rally in Gateshead is reported to have rippled right across the North-East of England.  The rallies were designed not to be photo-ops for the TV but were genuine engagements with voters.

‘For the many not the few’ became more than a slogan but became reality in the infectious participation of working class people in the rallies and meetings.  Reports surfaced of Labour party activity in towns and villages that had not seen Labour Party activity before.  The participation of the young, the participation of working class families that don’t normally attend political events, and the extension of the Party to parts of the country not previously reached all demonstrated that this was a mass phenomenon.  And it was this mass sentiment that appeared in TV audiences that led Tory papers to accuse the broadcasters of bias in audience selection.

So, if these are the factors that led to the massive increase in the Labour vote not seen since 1945, it is obvious how further steps forward must now be taken.

Mass participation in the labour movement cannot depend on elections but must involve activity to build the movement and build the Labour Party, including a youth wing.  This includes union organisation, campaign groups and tenants and residents’ associations.   In one way the Corbyn movement has been lucky that one failed challenge to his leadership and then a general election have provided the opportunity to build upon his initial election. The real prospect of another election soon will provide another opportunity but relying on such events is not enough and the movement in and around the Labour Party has the chance to set the agenda and push through victories through building a permanent mass movement.

Political leadership of this movement is also a continuing process of political campaigning and democratic organisation.  Above all, the potential for the right and ‘soft’ left of the Party to usurp control of the party arising from any, even  minor, setback should be removed by a campaign to democratise the Party and the labour movement as a whole.  A truce with the right on the basis that the Labour Party is ‘a broad church’ should not come to mean tolerance of machine politics, undemocratic practices and rules, and open attempts at sabotage.

Finally, the most important question is one of politics.  Less than a week before the end of the election campaign the media suddenly woke up to the fact that the Brexit election had ignored Brexit.  But as the old adage goes – you can ignore Brexit but Brexit will not ignore you. The complexities of Brexit have been a foreign country for the mainstream media from the beginning and the issue is presented more and more as one resolved by opposition to the best trade deal possible on the grounds that the primary objective is limitation of immigration.

This is not the ground on which a working-class alternative can be built and it is not the common ground of those who voted Labour in the election. The implicit blaming of social ills on foreigners facilitates the explicit blame expressed in xenophobia and racism.  The identification of outsiders as those to blame for ‘our’ problems becomes the need to identify and suppress those inside who are ‘agents’ of these outsiders because they won’t blame immigrants for poor public services and won’t scapegoat immigrant labour for local capitalist exploitation.  It leads to paper headlines such as “Crush the Saboteurs”. If curbing immigration is part of a solution then it provides excuses for Tories, Blairites and racists to excuse their support for austerity.  Most importantly it undermines the unity of working people that is needed to take us forward.

Just as during the election, this will mean confronting and largely bypassing the Tory media and mobilising Party members to convince uncertain supporters ,or even those opposed, that the social-democratic programme put forward by Corbyn that they support cannot be enacted in a Brexit Britain.

The election has opened up opportunities for British workers, but they must seize them like they grasped the election.  When Marx was asked what his idea of happiness was, he said “to fight’.  And that is what we must continue to do.

1 thought on “How the Many struck back against the Few”