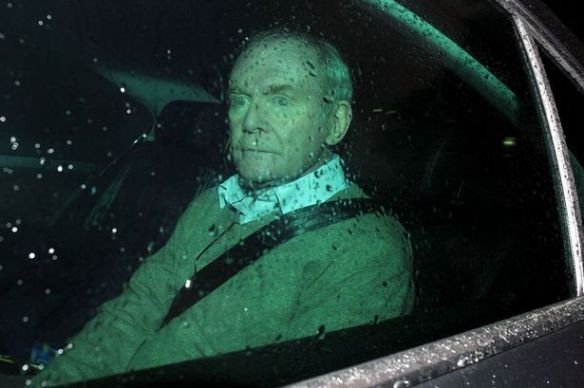 When a dreadfully ill-looking Martin McGuinness appeared on television to announce his resignation as Deputy First Minister he perfectly personified the alarming state of Sinn Fein strategy.  Whatever about the nature of his illness there is nothing secret about the utter failure of the latter  The repeated response of Sinn Fein to republican critics that these detractors had no strategy to bring about their goals has itself been exposed, as their own policy has become a self-declared failure.

The resignation letter of McGuinness put a poor gloss on a hasty decision that was forced on the party and which it dearly sought to avoid.  Recent actions betrayed a desperation to save its position in the Stormont regime and thereby the regime itself.  It opposed a public inquiry into a scandalous Renewable Heat Incentive (RHI) Scheme, designed to protect the climate by giving participants £160 for every £100 they spent on burning wooden pellets.  Unlike the British scheme no limit was set on how much was to be spent on the incentive to burn as much as one could.  It was indefensible and in any other liberal democracy, such as Northern Ireland pretends to be, it would have led to a resignation.

Sinn Fein opposed a vote of no confidence in the First Minister Arlene Foster, responsible for the scheme, explicitly stating it was because it wished to save the Stormont institutions.  It also opposed a public inquiry into the scheme because it knew that the Democratic Unionist Party would not wear it.  It hoped instead that a call for Foster to merely step aside for a few weeks, while some fig-leaf of an investigation did the needful in calming the political waters, would be agreeable.  However, the DUP advanced the age-old ‘not an inch’ approach of unionism to reject its request for the pathetic.

To rub salt into the wounds, just before Christmas the DUP Culture Minister withdrew the small bursary scheme, costing only £50,000, for children to attend the Gaeltacht to learn Irish.  The widespread suspicion that millions were being given to well-connected DUP supporters through the RHI scheme sat beside the vindictive insult to Irish language enthusiasts who are overwhelmingly Catholic.

McGuinness has accused the DUP of arrogance, to which it might be tempting to say that it takes one to know one, where the DUP not in a league of their own. Nevertheless, they made for a workable double act for 10 years and the DUP has not recently changed its spots.

The personal arrogance or otherwise of Arlene Foster (she hardly hides it) confuted the media-attempted creation of yet another new ‘moderate’ Unionist leader and is hardly the point.  Expecting a Unionist leader to show humility ignores the laager supremacist ideology with which unionism is inseparably entwined, summed up in its primitive slogans of ‘not an inch’, ‘this we will maintain’, ‘we can do no other’, ‘no surrender’ and ‘we are the people’, all testament to an utterly reactionary movement.

Sinn Fein sat for ten years promising and not delivering, promising equality while delivering sectarian division; promising to oppose austerity while imposing it; promising opposition to welfare reform while handing powers to Westminster to ensure it was implemented, and within the last year promising a ‘Fresh Start’ and a ‘united Executive’, which produced the old, stale smell of bigotry and bitter animosity.

It failed and its complaint about the failure of the Good Friday Agreement is its own failure – the DUP are not complaining about any such failure.  So sewn up has Sinn Fein been that when McGuinness resigned over the RHI scheme the DUP straight away cynically announced its support for a judicial inquiry, leaving Sinn Fein as the only party not to support one.

It promises no return to the status quo following the resignation.  But how is it going to convince anyone that it can go back into office with the DUP and deliver anything different from the last decade of failure?

We should be clear.  It was not RHI that forced Sinn Fein out.  As we have seen it was prepared to give the DUP a way out.  It has known about this scandal for a year and did nothing.  It put up with unionist arrogance and sectarianism for 10 years on the basis that it too had its own sectarian spoils to dispense.  It hasn’t all of a sudden become remorseful at broken promises: once it abandoned armed struggle against the British state the Provisionals had no principles left.

McGuinness resigned because Sinn Fein’s humiliation was so comprehensive its base were leaving it – through increased Catholic abstention and grumblings even from the membership.  The election of two People before Profit candidates in West Belfast and Derry was a warning that it could face an alternative.  DUP arrogance was a factor to the extent that it knew its predicament wasn’t going to change – Foster and the DUP were openly flouting the rules that both parties were deemed to be equal and could only act together.

Some will see these events as proof that the Northern State is irreformable.  McGuinness’s statement was careful to include the British in the cast of those to blame.  A local Stormont regime steeped in sectarianism has never been unpalatable for the British and Sinn Fein is not now presenting them as the necessary factor in making unionism more amenable to equality of sectarian division.  The final proof of the irreformability of the Northern State, in the sense of its inherent sectarian nature, is that it is more than likely that any election will return the same two forces as the largest parties.

The Stormont regime provides evidence of the instability of a sectarian carve-up.  While almost all commentators and political parties have lamented the loss of credibility of the political settlement through the RHI scandal, this is its only progressive outcome.  Stormont is destroying itself.  What matters for socialists is that some steps are taken by workers to build an alternative.

1 thought on “The decay of Stormont and Sinn Fein”