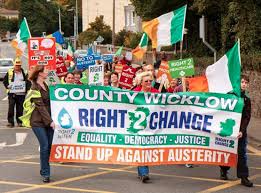 Since there isn’t going to be a left government elected in 2016 the left has seen itself with two challenges.  Firstly how to defend themselves against the charge that it is they who are the barrier to such a prospect through ruling out an electoral alliance of some sort with Sinn Fein and the trade union organised Right2Water campaign and secondly, how do they explain their electoral strategy without a left Government; a plan B so to speak?

As I have argued in the three previous posts, the left programme for Government and that advocated by the Right2Water campaign are not so dissimilar and if they were serious about a broad alliance that included Sinn Fein there would have been more of an effort to pursue an agreed platform and having done so seek to split the trade unions from endorsing Sinn Fein if this effort proved fruitless.  The cause of the failure could then be held up as warranting the split of the unions from their endorsement  of the Sinners.  I have argued the grounds for the latter are narrow, although from my point of view this justifies more the creation of a different platform than accommodation with Sinn Fein.

The Anti-Austerity Alliance has attempted to do some weak imitation of this in a statement:

“The AAA is part of Right2Water and we believe that R2W and the trade unions behind it have played a very important role in mobilising people on many mass demonstrations.  We accept the positive intentions of the trade unions in initiating Right2Change but we believe having Sinn Fein at the centre of a new anti austerity political movement is a major mistake.”

The statement then goes on to make a number of points about the weak tactics of Sinn Fein in the anti-water charges campaign, their role in imposing austerity in the North, their signals to Fianna Fail (FF) that they may go into coalition with them and their own much more radical policies and reliance on working class self-activity.  Finally they bum up the potential for a left-led electoral intervention, dropping a figure of potentially 30 per cent support into the discussion.

As far as tactics go, tactics are tactics and not a strong basis to refuse alliance.  The criticism of Sinn Fein’s role in the North is bang-on; the question of coalition with FF would not arise if there was a wider left alliance and their claim to much more radical policies is not nearly as strong as they would like to believe.  Certainly, as the analysis of their budgetary proposals goes, it is a question of differences of degree only, which are important but not in themselves enough to rule out an alliance.  As for the question of workers’ self-activity – in the left’s strategy this the consistent practice of sponsoring campaign fronts consisting of protests over single issues.  The broader strategy remains one of electoral success backed up by such support outside, workers self-activity is therefore strategically subordinate.  And as far as the prospects for success go, the figure of 30 per cent is not a promise, not a forecast and not an analysis or fact on which to decide what has to be done.

In answering the specific questions posed by the Right2Change they argue as follows:

The AAA generally supports the reforms outlined in the policy principles. We believe that for these to be realised will necessitate going much further than the projected spending increases in the Fiscal Framework Document. These reforms are reasonable and necessary and provide the opportunity to win mass support for the radical change that is needed but they are beyond what the current system can offer.

Does the AAA agree now to form a progressive government based on this platform if the numbers allow?

What this means is that the AAA is not in favour of a left Government but what might be called an anti-capitalist Government in which case an alliance with Sinn Fein does not arise, and neither for that matter does an alliance with the trade unions in the anti-water charges campaign

Except it won’t be getting socialism.

As Leon Trotsky so accurately put it “it would of course be a disastrous error, an outright deception, to assert that the road to socialism passes, not through the proletarian revolution, but through nationalisation by the bourgeois state of various branches of industry and their transfer into the hands of the workers’ organisations.”

In essence the policy of the other organisation on the radical left, People before Profit (PbP), is no different from the Anti-Austerity Alliance:

“Sinn Fein is sending out conflicting signals. They talk about forming a ‘progressive government’ but also indicate that they are willing to join in coalition with Fianna Fail or Labour, provided they are the larger party. In view of the position we stated above, they

* would have to rule out coalition with the establishment parties –something they are very reluctant to do.

* would have to agree to an increase in corporation tax – even though they tried to reduce it in the North.

* would have to agree to writing down Ireland’s debt rather than just asking permission from the EU.

* would have to stop promoting austerity in the North while opposing it in the South.

* would have to join the active fight against water charges by promoting a boycott.

Working people who want real and significant change should query Sinn Fein on these issues.”

The PbP policy has all the strengths and weaknesses of the former but it combines it with its own political confusions which I will look at in the next post.