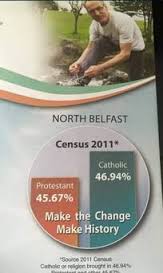 In the final post on the UK general election I want to look at the results from my own little polity and the political slum that is Northern Ireland.  Like all slums the blame for its condition lies with the landlord, the British state.  As usual all the tenants hope and expect that the landlord will clean it up. But it never does.

There the analogy should rest.  The most recent election was notable for what the front page of the Northern nationalist paper, ‘The Irish News’, described as ‘Nationalists turn away from the polls’.  Their parties, Sinn Fein and the SDLP, collected 38.4% of the vote while the DUP and Ulster Unionists captured 41.7%.  The latter figure does not include the various other unionist parties such as Traditional Unionist Voice and UKIP which brings the unionist total to 46.6%. If we include the Alliance Party, which is a unionist party in all but name, the unionist vote was 55.2%.

The message?  There isn’t going to be a United Ireland any time soon.  The Sinn Fein vote went down slightly by 1% even while the SDLP vote declined by 2.6% and it lost the Fermanagh and South Tyrone seat, not the way they wanted to enter into the historic hundredth anniversary of the 1916 rising.  ‘The Irish News’ explained that the nationalist vote had declined to its lowest level since the 1992 Westminster vote, which is before the ceasefires. That is, before the current peace process ‘strategy’ of republicans was/is supposed to deliver a united Ireland.

None of this fits with the accepted story of a rising Catholic population and a more and more demoralised Protestant one.  Sooner or later, the story goes, there will be a Catholic majority that will vote in a united Ireland. The truth of this is accepted by many and, I would hazard a guess, by many who would deny it vehemently in public.  I remember my aunt, a Shankill Road Protestant, remark about 25 years ago that there would eventually be a united Ireland, but not in her lifetime.  And she was at least half right in that.

Socialists have always supported self-determination for the Irish people as a whole, as the only democratic response to the Irish national question.  Not of course universally.  The Militant Tendency/Socialist Party tradition with its notoriously statist view of socialism, which incidentally has nothing to do with Marxism, has always managed to get it wrong.  Its statist view has seen it join left nationalist formations in Britain such as NO2EU, and it led the rightward collapse of the left in Scotland into Scottish nationalism.  In the North of Ireland on the other hand, entirely consistent with its accommodation to whatever nationalism is strongest, it has capitulated time and time again to loyalism and the British State.

This general response of socialist to the national question remains correct but the growth of nationalism in the North of Ireland, which now appears halted, has demonstrated that democracy is not a classless construct.  Bourgeois democracy in a society which has always been characterised by sectarianism has definite limits.

Once the Provisionals stopped fighting the British and decided to join in the governance of its system, and started asking the landlord to sort out the slum – the landlord responsible for its creation – it stopped having any claim to progressive status.  It then became the most militant and vocal champion of Catholic rights, not civil rights, but sectarian rights.  This has been exposed in the case of a prominent Sinn Fein Minister and also in the recent election.

In North Belfast Sinn Fein put out an election leaflet that included a graphic showing the Catholic and Protestant proportions of the constituency, the none too subtle message being that the majority Catholic constituency should be electing a Sinn Fein MP.  But of course that also means that Protestants must vote for the sitting Unionist MP.

The Sinn Fein excuses for it only bury it deeper in the sectarian mire.  First the excuses arrived only after it spent weeks defending the leaflet.  Then it wanted, it said, to use the terms nationalist and unionist but the Post Office said census figures had to be couched in terms of Catholic and Protestant.  So what it is saying, after trying to blame the Post Office, is that  instead of rejecting the graphic it decided that yes indeed substitution of Nationalist and Unionist by Catholic and Protestant was fine.  Now we know what it means when it uses the former terms in future.

Oh, and one more thing.  It regretted its decision to include the graphic – as Mr Gerry Kelly said “I think, in retrospect, the decision then should probably have been to withdraw the graph, because it did give an argument to our opponents, whether that was the SDLP or unionists.”  Yes Gerry, you’re right about that. 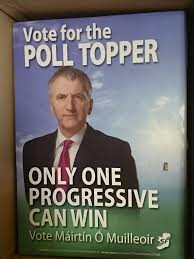 The reactionary position of Sinn Fein was also demonstrated in another graphic used on its leaflet for their candidate in South Belfast.  Having misleadingly described the candidate as ‘the poll topper’ – in fact the sitting MP was from the SDLP – it then said he was the ‘only Progressive Candidate who can win’ – clearly not the case since the SDLP were not listed by the leaflet as one of the five parties ‘united for austerity.’

These five parties were the Conservatives, DUP, UUP, UKIP and Alliance Parties. One of these parties stood out from the others – the DUP.  Why? – because Sinn Fein is in permanent coalition with this party.  And at the time the leaflet was put through the doors the Tories looked like they might be relying on the DUP to get them into power.

Wouldn’t that have looked lovely – the so-called anti-austerity Sinn Fein in Government with the DUP who were keeping the austerity-inflicting Tories in Government.  Don’t bother to try to work out how Sinn Fein would have justified it, they have been justifying inflicting one of the most right wing parties in Europe on this part of the continent for years.

‘The Irish News’ front page has reflected the disorientation of Northern nationalism following the election.  It produced some commentator to explain what had gone wrong.

Apparently  there is a ‘growing number of nationalists who appear switched off from the electoral process (reflecting) a community more at ease with Northern Ireland.’

Almost all of this is rubbish.

Yes, nationalism is suffering a retreat, it’s been retreating for years, and now endorses the legitimacy of partition and its institutions, the British nationality of Irish Protestants and the unionist veto on a united Ireland.

Contrary to its assertion, there is no lack of competition among nationalist parties and unlike unionism there was no electoral pact between the SDLP and Sinn Fein during the election.

Relatively high unionist participation in the election is not because they are more highly strung about identity; in fact the lack of unionist voter participation has been remarked upon for years.  Did they suddenly get a fit of the nerves just recently?  Newspapers have recently reported increasing numbers of parents from what is called ‘a Protestant background’ refusing to designate their children as Protestant at school.

The fall in the nationalist vote is not because nationalists are happy with the status quo but exactly the opposite.  The stench of nepotism, cronyism and corruption from Stormont is all the more repelling on the nationalist side given the claims to radical politics and progressive change from the nationalist parties, particularly Sinn Fein.

Instead the DUP/Sinn Fein coalition Government has been beset by crisis, incapacity, incompetence, secrecy, arrogance, lack of accountability, lack of transparency and financial scandal.  The simplest of questions don’t get answered for years (perhaps never) by Government departments with dozens of communications staff.

The latest such offerings are the revelation of the extent of the employment of Special Advisors (SPADS) employed by all the parties in office without any public recruitment process.  These SPADS are supposed to bring special skills to their political masters, the most prominent of which appears to be their close connection to the parties and their ability to hide any special skills.

A freedom of information request revealed that in one financial year the Stormont Executive spent almost £2m on these SPADS, more than the Scottish and Welsh governments combined.  In 2013/2014, the pay bands and grades for these special advisers varied across the UK, going from £36,000 up to £91,000.  In Scotland, three of them were in the top pay band while at Stormont all 21 posts were.

The second is the scandal around a contractor to the Housing Executive which we reported on before here and here.  The SPAD at the centre of the controversy, far from being dumped has been promoted while it is reported that the DUP member who took a more principled stand is being subject to disciplinary action by the party.  At the end of an editorial dripping with scorn ‘The Irish News’ declared of the Stormont regime that “it is increasingly doubtful if the institutions are worth preserving in the first place.”

When the main voice of constitutional nationalism expresses exasperation with the peace process institutions it really does mean a lot of nationalists are thoroughly disillusioned.  This is one of the main results of the election.  In itself it is not a positive but it is certainly a prerequisite for one to develop.

2 thoughts on “The UK general election part 3: sectarianism and democracy”