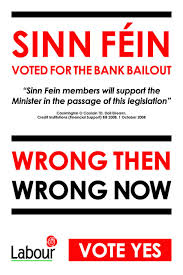 The strike by public sector workers in the North of Ireland on March 13 was significant because the two major parties, including Sinn Fein, were a target of the strike, whether Sinn Fein or even some of the strikers liked it or not.  Sinn Fein obviously didn’t like it because it damaged its posturing as an anti-austerity party and trade union leaders didn’t like it because their strategy is to persuade the parties responsible for austerity to change their minds and try to get more out of the Treasury in London.

The latest multiyear budgetary programme of the Stormont administration is the second austerity programme which Sinn Fein has jointly authored while in office.  The first did not see the job losses witnessed in England, Wales and Scotland but it did see a reduction of around 14,000.  Pay and pension entitlement for public sector workers were also cut.  Along with almost every other public sector worker I have suffered two years of a pay freeze while inflation consistently exceeded the supposed target of the Bank of England and my pension contributions increased, while my benefits were reduced and I will have to work longer to get them.

The much vaunted protection of welfare in the new budget, whatever coverage it eventually has, will come from money taken from other public services, including cuts to education.  As one local newspaper columnist put it – these will include an end to free books for pre-school children, making Northern Ireland the only part of the UK that will not have the scheme.  This will save £250,000 a year, or one third of the £750,000 that 36 Sinn Fein politicians at Stormont paid to a party research company that was unable to show any research.

The much vaunted financial deal that saved the Stormont administration, before the latest crisis, was hailed for delivering an extra £2 billion to the Northern Ireland budget, except that it didn’t.  Only a third of it could be called new, which spread over 10 years is less than a third of 1% of what is spent each year.

The rest is loans or ‘flexibility’, which means that money that is for capital investment can be incurred on day-to-day expenditure.  You don’t have to be an accountant to realise that relying on loans and investment funds to pay for on-going expenses is not sustainable.  Further expenditure is allowed if funded by asset sales, which again is not sustainable, and raises a green light for privatisation.

Such privatisation would leave the lefty credentials of Sinn Fein wearing even thinner.

Not all the capital money will be spent on recurring expenses.  £700m can be spent (in fact must be spent or it won’t be spent at all) on paying off around 20,000 public sector employees through a voluntary exit scheme.  This is a major plank in the opposition of the trade unions but it is not clear that many workers themselves will not take the money and run.  Unfortunately the old union maxim that the job is not yours to sell is long forgotten.  It is obviously completely unknown to Sinn Fein who talk of losing only ‘posts’ as if this is not what is actually wrong about what they are doing.

It is claimed that there will be no compulsory redundancies but the NIPSA trade union has drawn attention to advanced plans to cut 50 jobs, or over half the workforce, from the Northern Ireland Association for the Care and Resettlement of Offenders (NIACRO).  As NIPSA points out, when NIACRO works with prisoners on release reoffending rates drop from over 50% to less than 25%. This has all the hallmarks of the stupid and counter-productive cuts often condemned by Sinn Fein.

The claim to be protecting the vulnerable now doesn’t look so strong.

An amount of £350m will go to capital investment in integrated education, which at least sounds progressive until it’s understood that this doesn’t involve Catholic and Protestant children being educated in the one classroom but actually often means two sectarian-denominated schools being put on the one campus.  The move towards a shared campus simply reflects the fact that sectarianism is becoming expensive.

Rather than signalling the end of sectarian schooling it shows the lengths that will be gone to in order to preserve this apartheid system.  But the sectarian education system also has the support of Sinn Fein.  It would appear that apartheid can be supported in this case if the justification  given for the original South African variety – separate but EQUAL – can be adhered to.

This isn’t even progressive never mind left wing or socialist.

That the new deal means no rejection of the previous imposition of reactionary Tory-Lib Dem policy is shown by the fact that the fines of £114m that had to be paid for not implementing the welfare cuts in 2014-2005 must be paid now, and the £100m loan required to balance the books in the same year must also be paid.

Last but not least the new financial arrangement allows the local administration to lower corporation tax, once again supported by Sinn Fein.  Their thread bare justification for this is the harmonisation of an all-island economy.  In fact, along with many republicans’ support for Scottish independence, it involves mutual competition of small states in a race to put more money into the fat pockets of mainly US multinationals.  Were the policy to succeed the London Treasury has stated clearly that the Stormont regime will have to pay it for its losses.

All of this passes Sinn Fein by.  It clings to its claims to be anti-austerity purely on its partial opposition to cuts in welfare benefits.  Its populist politics is revealed by its approach that workers are victims and its most vulnerable members should be given some form of protection by a benevolent state.

The effect of privileging one section of the working class above another is always to undermine and weaken its potential political unity.  In this case the potential unity of the working population and those on benefits, who are always the subjects of divisive attack by right wing forces.   By limiting its proclaimed anti-austerity agenda to support to some on benefits it plays into the divisive claims of these right wing forces.  Sinn Fein appears happy to see austerity delivered to those in work while proclaiming great concern for those who are unable to or cannot work.

The interests of the working class as a class and as a political force independent and opposed to the state are alien ideas to a purely nationalist movement.

Unfortunately it is also alien to the leaders of Ireland’s trade unions and their new proclaimed support for Sinn Fein is proof of this.  At the Sinn Fein Ard Fheis – that is even before Sinn Fein’s renewed expressions of concern for welfare claimants – the Irish Congress of Trades Unions President, Jack Douglas, extolled Sinn Fein’s adherence to the union cause.  That is after the austerity budget the Northern unions were calling a strike against!  A week or so earlier the leader of Ireland’s biggest union SIPTU, Jack O’Connor, hailed Sinn Fein as a potential partner of the Labour Party in Government. The same Labour Party that has been implementing the Troika austerity agenda it was elected promising to oppose.

The performance of Sinn Fein in office in the North is a stark warning of its future role in the South but the record of Sinn Fein in the South is ample demonstration itself.  It was Sinn Fein who voted for the bank bailout that made the debts of the speculators the millstone round the neck of the workers.  Its ‘leading role’ in the resistance to austerity today is to identify itself with the campaign against water charges while seeking electoral advantage from it.  Beyond seeking votes from the campaign it has no strategy to make the campaign a success.

A couple of weeks ago an economist from Goldman Sachs claimed that the biggest threat to the Irish economy was that Sinn Fein would keep its promises on its opposition to austerity.  He needn’t have worried.

I remember around twenty years ago attending a meeting in Conway Mill on the Falls Road during which time Sinn Fein was trying to get into talks with the Unionists, who were refusing to engage. I asked Gerry Adams what he expected to achieve from such negotiations when the Unionists wouldn’t even talk to him.  A United Ireland he said.

Well we all know how that worked out.