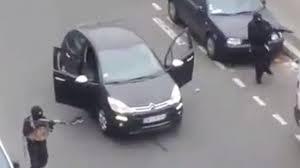 When the events in Paris unfolded last week I initially thought that I was witnessing marginalised and alienated young people involved in acts of reactionary medieval brutality.  However the terrorists, and that is exactly what they were, employing the weapon of violence in order to terrorise into silence critics of their religion, were not young.  Nor was their inspiration.

Perhaps this does not matter.  Seeing them as marginalised and alienated adults is not so very different from seeing them as disaffected youth who are rebelling against an authority they despise.  It does however make it easier to appreciate that not every act of the marginalised and alienated is a distorted expression of progressive impulses.  For the second half of my initial view can hardly be challenged – that the Islamic fundamentalism expressed by the attackers is reactionary and characterised by medieval barbarism.

The forces mobilised by fundamentalism in such attacks should no more be seen as potential candidates for enlistment in the socialist cause, but who have unfortunately been led astray,  than are those who normally make up the ranks of the lumpenproletarian supporters of fascism.  Not all victims of capitalism are candidates for its socialist opposition.  That has never been the case, nor will it ever be the case.  The basis for socialism is not the most angry, desperate or oppressed but the working class and particularly its most enlightened sections.

These are not people who seek a failed or counterproductive means to an end with some progressive content.  The victory of Islamic fundamentalism over imperialism in countries with a Muslim majority is no sort of victory for the working class.  The enemy of my enemy is not by this fact my friend and the view that the greatest enemy is imperialism does not relegate to minor status the reactionary forces that seek to take society backwards.  This is especially true for socialists in those countries in which fundamentalism is strong and who do not have the luxury of seeing these forces as second order opponents or worse, genuine expressions of some sort of anti-imperialism.

The Anti-Capitalist Party in France states:

“This murderous violence comes from somewhere. It’s created in the heart of the social and moral violence which is very familiar to large numbers of the young people who live on the working class estates. It’s the violence of racism, xenophobia, discrimination and the violence of unemployment and exploitation. This barbarous violence is the monstrous child of the social war that the right and the left are waging in the service of finance. On top of this there are the wars they have started against Iraq, in Afghanistan, Libya, Africa and Syria. . . .”

But we can identify the ‘somewhere’ more accurately, for there is a direct connection between the murderous violence and reactionary social forces in what is called the Middle East, reactionary forces that are the enemy not only of French workers but of young people and workers in the countries of the Middle East.

The Anti-Capitalist Party also says that “there is no answer to the social decomposition of which the crime against Charlie Hebdo is a dramatic expression unless we fight the politics which make it possible.” But this social decomposition has taken the form in this case of Islamic fundamentalism, which must be fought.

The argument that the enemy is imperialism and the task is to oppose it as the root cause of the Paris events cannot excuse the need to respond to these attacks in the appropriate way, to identify the actions as wholly reactionary – the acts themselves, their motivation and their consequences.

While some of this fundamentalism now pretends to an anti-imperialism this is the purest opportunism behind which lie reactionary class and ideological interests.  That first great fundamentalist state, Iran, now collaborates with imperialism in fighting a separate fundamentalist movement in the shape of the Islamic State.  The Islamic fundamentalists of Pakistan were for long dismissed by the Pakistani people as the B-team for the army that was the solid ally of the United States.  And we all are aware of the alliance between fundamentalism and the US in the war against the Soviet Union in Afghanistan.

Above all Islamic fundamentalism is an enemy of democracy and socialism.

It is therefore appropriate that the terrorist attacks have been used by the security agencies of western imperialist States to seek greater powers.  Even while the terrorists were known to these agencies and they failed to prevent the attacks.

Ordinary citizens cannot rely or place their trust in these agencies.  Their original sponsorship of Islamic fundamentalism in the war against the Soviet Union cannot be dismissed as a ‘mistake’ nor, as noted, can their continued collaboration with the most barbaric regimes that support various branches of fundamentalism be ignored.  “Saudi Arabia Launches Huge Arms Buying Spree; France to Net Most Orders” is one headline that shows both ugly faces of this alliance.

The restriction of democratic rights in France, Britain or Ireland will not come from these fundamentalists who do not have the power to implement their political programmes in these countries but from security apparatuses demanding greater powers.  It is not that the terrorists seek the implementation of repression in some misguided belief that this will stir resistance.  They do not seek resistance to the restriction of democratic rights because they do not support such rights themselves.  The whole idea of such a motivation would not cross anybody’s mind.

The reactionary character of these attacks is widely understood, which is why in France there has been widespread expression of the view that the division that the attacks seek to create must be opposed.  The latter is a progressive impulse that can only be consistent if it expresses complete opposition to fundamentalist terror and any racist or anti-Muslim response.

The indiscriminate murder of writers and journalists and any person that was in the Charlie Hedbo offices can also therefore only be seen as an attack on the right to freedom of speech, in this case the right to criticise Islam.  The attack was not an attack on Islamophobia or on racism.  The political programme of Islamic fundamentalism does not care for the equality of religious affiliation but regards non-believers in its faith as infidels.

In this sense statements that express the view that the “cartoons such as those published by Charlie Hedbo do nothing to advance the cause of freedom of speech. Rather, they amount to hate speech” do not change the nature of the attack.  In this situation it is necessary to identify clearly what has happened without fear that it compromises some political standpoint, which by virtue of being compromised demonstrates its misconception.

Such rights are purely bourgeois democratic rights?  Of course they are.  Is France not a capitalist country?  Bourgeois freedom of speech leads to the expression of views we dislike, even abhor?  How could it be otherwise?

But is it not better, much better, for French workers of all religions and none to have such democratic rights?  Are we only to defend freedom of speech when it is to our taste?  And for how long would that position be taken seriously?

The anti-Islam cartoons did not advance freedom of speech?  But were they not an expression of it?  And if there were no more cartoons ridiculing Islam, what would that be an expression of?  Is the Marxist critique of Islam also to be subordinated to the view that the oppression of Muslims means that the religious sensitivities of that people must not be offended lest their oppression be enhanced?  Where then are these peoples’ route out of oppression?  How are socialists in ‘the West’ to point out the hypocrisy of Christian support for war if religion is above criticism?

Perhaps it is only the religion itself that should be spared criticism but not its institutions?  But what of states where there is no separation?  Like many where Islam is the majority religion.

So the immediate response must be that of defending democratic rights and opposing the terrorism that seeks to destroy such rights.  It requires opposition to the security agencies of the State and the attempts to turn the actions of fundamentalists against every adherent of the Islamic faith through attacks on mosques and individual Muslims.

Such a defence must raise the banner of democracy against the fundamentalists that would destroy it, the repressive agencies of the State that would subordinate it to their control and to its false friends in the capitalist parties for whom it is accepted only in so far as it does not develop to threaten their system.

Does all this get to the root of the problem?

Is this root the alienation of capitalism or more specifically the imperialist domination and war against countries that are mainly Muslim?  Is it Islamic fundamentalism or religion in general?

I have mentioned a number of times that socialists are defined by what they are for but knowing what you are against is not a small thing either.  In Ireland we have socialists who are sanctimonious in their opposition to religious sectarianism but studiously avoid determining its exact concrete nature.

So yes capitalist alienation is expressed in the acts of desperate people who engage in barbarous acts of violence but we know that this alienation arises from the rather more concrete circumstances of imperialist domination and war in certain Muslim countries.  It would be impossible to effectively fight the violence of the Paris attacks without also opposing imperialist violence in these countries.  But the fundamentalist response to this imperialist violence in Paris and in these countries themselves is itself barbaric and must be opposed, in the interests of the potential victims of terrorism in France and in the Muslim world.

But if we know the causes of this alienation we also know how it has come to express itself in the backward form of Islamic fundamentalism.  We are therefore required to fight this reactionary, obscurantist ideology and programme.

Fundamentalism has grown not just because of the actions of imperialism, and the failure of nationalist and leftist programmes and movements in many Muslim countries, but also because it can more readily gain acceptance due to the fact that the populations are already deeply religious.

Combatting this is no easy task and, while opposition to religion must be a principle, its prosecution can only be carried out with regard to ensuring that those who want to fight for a better world in the here and now are not rejected for their belief in a hereafter world.  Such a fight will involve opposition to the material privileges of religion through its support by the state and through an alternative to the social programmes of well-funded fundamentalist movements.

In ‘the West’ it also means fighting the privileges of religion and for complete separation of church and state, in circumstances where it is rather easier to fight the material and ideological basis of religion.

As in all struggles it is necessary to be with the workers, in this case in their genuine expressions of revulsion at the terrorist attacks and their sincere advocacy of democratic rights, even, if not especially, when these are cynically and hypocritically appropriated by the likes of the dignitaries of such imperialism and Islamic fundamentalism who took part in the million person march in Paris.  At the same time it is necessary to put forward the equally sincere and honest programme that such violence can only be ended by opposition to Islamic fundamentalism, the imperialism that is its partner in barbarism and the irrational belief systems that so easily sanctify both.

3 thoughts on “The Paris attacks”