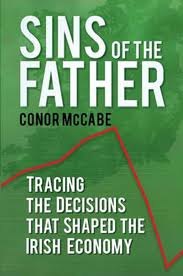 This book sets out to explain why the banking crisis in the Irish state developed the way it did and how property and financial speculation has been so prominent a feature of its economic development.  It is therefore an argument against the view that the crisis has been the result of some sort of moral collapse in certain sections of society.

Along the way the author, Conor McCabe, disposes of some common beliefs about the role of property in the Irish psyche, convincingly demonstrating that property ownership is not hard-wired into the Irish but has been consciously and repeatedly promoted by the state and employed as a means of strengthening particular class interests.  Thus the first Cumann na nGaedeal government promoted – as a solution to the notorious condition and shortage of decent housing for the working class – better housing for the middle class!

In an earlier version of the recent bailout of the banks he notes that helping the middle classes and property speculators with state money was the way the first Government decided to deal with tenements and slums.  As if proving there is truly nothing new in the world he notes the development of Dublin suburbs in the 1930s with little or no infrastructure or amenities.

The effects of this over the decades was to create a situation in which if you wanted a house you needed to buy one.  Public housing was neglected, a choice of last resort, and the earlier desire of workers to rent was blocked.  Even so the relatively recent and rapid rise in the proportion of home ownership is surprising, rising from 25 per cent in 1961 to 75 per cent in 1986. So much for property ownership being in the DNA!  In fact, as the author shows, it has been consciously promoted as a means of preventing “social unrest”, “revolutionary change” and because “there is no greater barrier against communism.”

McCabe points to the argument that the property boom at the turn of the century crowded out investment in productive activities and shows that State tax breaks helped fund the speculation that fuelled it.  Just as the State helped pump up the bubble it then stepped in to prop up the same interests that were behind it when it burst.  In this sense the State’s response to financial collapse was no turning point.  He effectively shows that British landlordism of the 19th century was replaced by a native version for the 20th and 21st.  Government policy helped create huge overproduction: in 2010 the number of empty housing units was counted as 302,625 – excluding holiday homes!

Conor is aware that all this is a description of the property boom and bust but is not an explanation (see page 56).  To do this he then presents a fuller history of Irish economic development.  It is not the case however that further, fuller and more complete description is explanation either.

If particular and contingent historical factors are not the explanation of the deeper causes of the boom and bust, but rather the concrete form in which the underlying contradictions played out, then it is only these fundamental processes which can provide a satisfactory explanation.  Or at least one that seeks to advance an argument that the causes of the crisis were in some way more than accidental.  Being more fundamental they can explain similar phenomena in more varied, concretely different circumstances – in countries as different as Japan, Spain, the USA and UK.  In fact the very variety of situations giving rise to similar symptoms of crisis point to systemic contradictions.

What the book does do very well however is show the particular features of Irish economic development, including the weakness of an economy which was governed as if it was still a region of Britain but which was cut off from the potential supports that this might have involved.

Nor did this change with the election of a Fianna Fail government in 1932, which introduced tariffs: at this point the State was described as virtually the last free-trading economy in the world.  There was no introduction of a separate currency or Central Bank and parity with Sterling was maintained.  In important ways the economy remained a region of Britain no matter the declaration of a Republic after World War II.

The resulting failure led to the new policy of promoting multinational investment, which was seen by the State as the least disruptive way of responding to international pressures to develop while protecting the existing class structure and minimising economic change.   McCabe emphasises the limits of multinational investment and the fact that money flows from it enter and exit the State with relatively modest impact. He quotes an assessment that this foreign investment did not develop a manufacturing base ‘comparable’ other small countries and argues its real importance lay in the opportunities provided to native property developers and financial and banking interests which service the investment.  This process fed into a property bubble in the 1960s which burst in the 1970s, again fuelled by state tax incentives but also state demand for the property developed.

He gives examples of the extraordinary tax incentives given to foreign investment and how State policy allowed the companies involved to do more or less what they wanted including at Bantry Bay where, in 1979, over 50 lives were lost in an oil explosion.  It transpired that the necessary safety measures had not been implemented and Gulf Oil had been allowed to regulate itself.  The Treaty Ports had been returned from the Brits but the Irish State had connived in the creation of another; all under the banner of economic development.

The policy was held up as a success but it was still recognised that it was a qualified one and accepted that indigenous industry had failed to create self-sustaining industrialisation.  Foreign investment remained largely divorced from local industry and the government sponsored Telesis report noted that only 8 per cent of components and sub-assemblies in the foreign engineering sector were sourced locally.  However, like inquiries and reports before it (and after) the Telesis Report was “greeted with fanfare and followed with silence.”

The major innovation came instead in the financial services sector where State policy had always been to maintain the parity link with sterling.  For Conor McCabe parity also meant poverty: the value of the Irish currency was maintained at too high a level to facilitate the development of competitive industry.

He does not delve into what a lower level would have meant for Irish workers as a lower valued currency would also have meant lower wages and a lower standard of living, all else being equal.  All else not being equal would have depended on the Irish State having a successful policy of state-led industrial development, not just throwing tax breaks and grants at private capitalists. In part his history is designed to show the strength of those class interests in the State who made their money through agriculture, property and banking and for whom all this would have been, at best, an unnecessary experiment.

That this ultimately was a feature of continuing imperialist domination – expressed in the relatively weak native capitalist development; in state institutions and policy and in other cultural traits – is not developed in the book.  The book is relatively short so this is not a criticism.  This subject raises political questions that have bedevilled an understanding of the relationship between ‘national oppression’ and capitalist exploitation and it is no criticism that this is not gone into.  It was not the purpose of the book. The State maintained the link with sterling until joining the Exchange Rate Mechanism but devaluation drove home the lesson that the link was more than just a policy decision but reflected a deeper economic relationship.

The book repeatedly shows the linkage between State policy and class interests.  Conor shows that the setting up of the Irish Financial Services Centre (IFSC) represented no exception to the state’s patronage of banking and financial interests, or a radically new economic development, and accepts the case that the IFSC is a tax haven, reporting its reputation even before the crash as the “wild west of European finance.”

He records the almost forgotten fact that the bank bail-out of 2008 was not the first and that tax payers had already bailed out Allied Irish Bank (AIB) before – in 1985.  While it has become fashionable to excoriate Anglo-Irish Bank at least it only went bust once.  The Fine Gael led Government of the time included Alan Dukes who, in the latest banking disaster, reprised his role by impersonating a Director of Anglo-Irish supposed to represent the public interest.  In 1985 AIB was saved from going bust by the tax payer who then watched seven days later this same bank announce unchanged dividends to its shareholders!  There followed years of law-breaking by the whole banking industry for which not one banker paid any penalty.  Put into context, the bail-out of 2008 becomes both more shocking and less surprising.

The book pulls together the various aspects of Irish economic development to show how the State’s policies, especially tax breaks and almost non-existent regulation, came together in the 2008 crisis. Property speculation fed on a limited boom partly fuelled by foreign investment which, boosted by state policy, became super-charged by credit speculation.  It was, in this sense, not at all new but rather the culmination (until the next time?) of the sins of the father. And the sins were many.

The book ends too summarily and in doing so appears to endorse more state spending on infrastructure as part of the solution: a liberal, Keynesian answer to the crisis.  One is compelled to ask in what way this is an alternative to what has gone before.  In so far as construction paid for by the state is designed to boost private capitalist investment there appears no major difference. (This is by no means the only similarity.) It is yet another tribute to the forces and policies described in the book, the power of the existing system and status quo, that those who are popularly viewed as its most vocal critics often simply echo it.

In the conclusion Conor McCabe notes that the new state did not have an independent economy.  What he has done is give a good account of the internal structure of this subordination and the class and state that constituted its structure.  But this is obviously only half the story.  If the economy was not independent a full description or analysis would have to describe and explain the much stronger international forces on which this subordination rested.

This itself would only be possible by recognising, as we have said, that the Irish State was not the only one to suffer a financial crisis and that, whatever its peculiarities might be, other crises in the US and Spain and before that in Japan, and perhaps tomorrow in China and Britain, point to a systemic crisis; in other words a crisis of capitalism.  Explaining how the Irish crisis took the form it did is impossible to do fully without also explaining why there was a crisis in the first place, one shared with other countries with a very different historical development.

Although beyond the scope of the book it is nonetheless a necessary task for Irish socialists.  Conor McCabe is not to be criticised for not doing what he did not intend and which others have not done.  Rather it is to be hoped that he can play a significant role in this collective task.  It will therefore be interesting to see what he writes in future because while the bad news is that the first edition of ‘Sins of the Father’ has sold out the good news is that the second is on its way.