The leaders of the G8 group of the wealthiest countries are meeting this week in rural County Fermanagh.  That some of the most powerful political leaders on the planet are visiting us is yet again another opportunity to demand of the local population the most obsequious and embarrassing homage to our betters.  Deference normally required only for royalty.  A columnist in a local paper reported that claims had been made that the visit would boost the local economy by something like £700 million, a figure so outlandish it does not even deserve ridicule.  More sober estimates have come in at less than £100 million but if the experience of Scotland is any guide the costs will easily exceed this and today I saw first-hand evidence that this will indeed be the case.

As is usual the media have been on overdrive to sell how wonderful this all is, normally in some vague and unspecified way, for example ‘it puts us on the map’, as if we weren’t already on it, and it gives us the opportunity to sell Northern Ireland. How often can you sell something that never gets bought?  It was the occasion for yet another economic package, announced by David Cameron, Peter Robinson and Martin McGuinness.  But again it was déjà vu all over again.

The local Executive, it was announced, will be able to borrow an additional £100m for capital projects for shared housing for example.  But the Executive has just confirmed that it is incapable of providing shared housing through its handling of the old Girdwood British Army base in North Belfast.

And no one will be able to tell you what golden opportunities were being missed until now by absence of this money .

More measures to boost lending to business was promised but it has been reported in the financial press that the ConDem coalition has totally failed in its attempts to achieve this goal with its own schemes in Britain.  Borrowing just when bond yields are rising across the globe, even after countries have printed money like never before – heralding an end the recent era of low interest rates and an interest rate rise that may have devastating economic consequences – does not look the cleverest policy in terms of timing.  Projects to be financially profitable will have a higher hurdle to jump over than before.

More peace money is promised while the local paper’s front page reported this week that there had been  a 25 per cent increase in paramilitary intimidation; sanctioned by the local police who have approved the loyalist UVF’s marking of territory in East Belfast by their flying of their paramilitary flags on anything that doesn’t move.  Meanwhile the DUP and Sinn Fein leaders hatch an £80m slush fund for these same paramilitaries.

We are promised yet another investment conference while having witnessed the utter failure of previous ones and most recently been treated to the farce of Peter Robinson and Martin McGuinness’s ‘investment-promoting’ visits to China and Brazil. Again we are promised another look at devolution of powers to reduce corporation tax as if a different result might be expected.  The example of the Republic across the border should demonstrate even to the terminally stupid that low corporation tax is perfectly compatible with bankruptcy.

It is simply impossible for anyone with any appreciation of recent events not to be cynical because no matter how jaundiced a view one takes of this event it is exceeded by the malignant contempt shown by the visiting leaders and their local satraps.

Obama has sanctioned spying powers that make George Orwell’s 1984 look like a photograph of the future and he approves drone attacks that murder dozens if not hundreds of civilians.  We have Russia’s Vladimir Putin whose wars in the Caucuses have involved utter devastation on an enormous scale. Then we have the Japanese, attempting to lay the foundation for a new nationalist militarism by rewriting its murderous imperial history. These are the leaders we are asked to welcome as if we are blessed to breathe the same air.

But reality intrudes and the real character of their visit is revealed by the security clamp-down that looks like and feels like a police state. Roads in Fermanagh have been blocked for a month, causing problems for small businesses in the area, while young people doing their year-end exams have been told to get to school at an unearthly hour to do them.  Fences have been built and thousands of security personnel brought in.  Belfast city centre on Monday morning looks like it is to be closed down.  Sixteen miles of the M2 motorway into the city is also to be closed so that Obama can speak at the Waterfront Hall in praise of the peace process that never ends and never ends promising the end of strife.  Government workers have been told by email that they may have difficulty getting to work but should therefore plan to travel longer, get in earlier and leave later – section 3.11 of Annex 2 paragraph 4.1 of the HR policy is referenced.  With no hint of irony the responsibility to maintain services to the public is repeated.

The reality of the visit is revealed by the fresh painting over of empty shops in the county town of Enniskillen to make them look like they are open and full of people. Oh, and the hotel complex the meeting is in isn’t really in administration, not being a casualty of the Irish property boom.  The plan is obviously that the hype will cover up the reality and, well, if it doesn’t, we’ll be outa here soon anyway.

Holding the G8 in Northern Ireland was seen as a bold step.  Wasn’t this the scene of decades of trouble and didn’t the G8 risk occasioning more?  Hadn’t previous summits been the cause of widespread protest wherever they were held?

Well today, Saturday, was to be evidence of the scale of the opposition to the G8 leaders and their crimes.  A demonstration had been called by trade union leaders and assorted NGOs.

Unfortunately this opposition proved that it wanted to show, not that a different world was possible, but that a slightly different world would be nice.  The hype of the G8 cheerleaders was replicated in the ICTU Northern Ireland Committee’s leaflet, which promised ‘what is sure to be one of the largest mass mobilisations of peoplepower Belfast has seen.’   The demo was in fact no more than 2,000 people – maximum – and not much different than the usual May Day demonstration.  The annual 12 July Orange bigot-fest is many times larger.  The slogan of the demonstration that ‘they are G8 – we are 7 billion’ looked very hollow. Belfast City centre was unusually quiet.  The alternative of having the demonstration through some working class areas would never have crossed anyone’s mind, certainly not that of the trade union leaders.

As I walked the less than half mile to the demonstration starting point through Belfast city centre I must have passed about 70 police land rovers, and that was just on the route that I took.  Most of the coppers were English – they looked like they weren’t natives and were very much more po-faced than the local cops, despite the overtime.  There were hundreds of them.  A bigger case of over-kill it would be hard to imagine.  It might even be embarrassing for their top brass, were the media to make anything of this OTT display of the state’s repressive power.  This was a demo called by ICTU for god’s sake!

This is the same ICTU that has for years either been in partnership with the state, as in the South, or seeking partnership, in the North.  Its leader was a member of the Southern State’s Central Bank, the Regulator that allowed the ‘wild west’ financial system to accumulate so much debt it bankrupted the country.  This is the trade union movement responsible for the Irish being renowned throughout Europe for their ability to accept austerity that has caused riots in Greece, Spain and Portugal.  It wants a ‘better and fairer way’ to inflict the pain of austerity.  It doesn’t actually want to overthrow capitalism and socialism was not a word I heard at the rally at the end of the demonstration.

Instead the speeches were declarations of opposition to bad things and support for good things and appeals to moral values such as fairness and justice.  Unfortunately the world is only as fair and a just as we can make it and in the meantime it is as just and as fair as the capitalist class considers it should be based on how it defines both.

What was missing was any strategy to change this situation and any agency that could enact this strategy.  What we were left with were appeals to the governments against whom we were actually demonstrating; appeals to the same states whose job it is to defend the system, not change it – the same state that put on show such a massive show of force to justify its hyping up of dire threats of violence.

As I and my friend left the rally and went into Boots for a short cut my friend was told to take down his hood – it had been pouring down for hours.  An older woman with grey hair was also told to take down her hood although she demanded to know why?  Was she hiding her identity so she could trash capitalism and then run into the street and avoid the hundreds of cops outside?  (Most of the bigger shops had massively increased security on their doors, another example of the hype surrounding the visit of the leaders of the ‘free’ world.)

One footnote: the rally outside the City Hall at the end of the demonstration was jeered and heckled by a group of perhaps 50 loyalists from the Shankill Road who were continuing their own protest against the butchers’ apron no longer being flown 365 days a year.  Ironically it was flying today, it being a ‘designated day’ because it was the Queen’s birthday – she has two don’t you know. These reactionary bigots sang sectarian songs including the ‘Billy Boys’, i.e. they were ‘up to their necks in fenian blood’ – a favourite of supporters of the now deceased football club Glasgow Rangers.  They waved the Israeli flag when the Palestinian cause was mentioned, booed loudly when the ‘Irish trade union movement’ was referenced and jeered when Derry was called Derry. 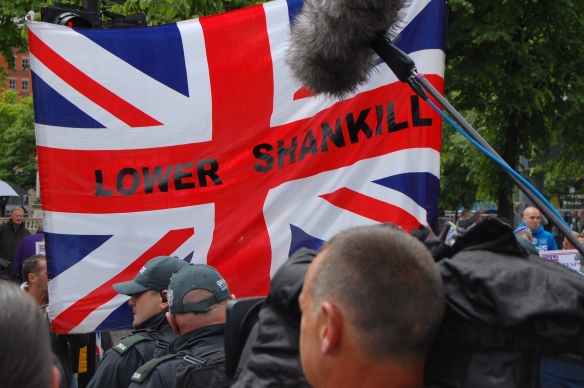 For some on the left being anti-sectarian means pretending that Irish nationalism is just as sectarian as loyalism and there exists by definition a sectarian equals sign between the political expressions of the catholic population and the Protestant one.  That, in my 35 years of political demonstrations, I have never come across contingents of loyalists on trade union and socialist demonstrations while republican contingents, just as they were today, are commonplace and unremarkable, might therefore seem strange.  If I believed what some of the Left do this fact would be inexplicable. The loyalists however know they are reactionary and today they knew that they hated those on the demonstration.  They felt safe in the knowledge that the demonstrators were either ‘fenians’ or, even worse, ‘rotten prods’.

One other footnote:  there was no Sinn Fein contingent on the demonstration.  Even a few years ago they would have sent a youth contingent to keep up pretence of some radical credentials.  Now instead they parade the hope of corporation tax cuts and multinational investment beside the DUP and a British Tory prime minister announcing imperialist intervention in yet another country, this time Syria.  Their non-participation is one welcome clarification of what was otherwise unfortunately not much more than an exhibition of weakness before power.