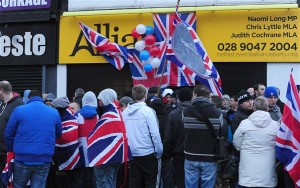 The decision last night of Belfast City Council to stop flying the union flag 365 days a year, and not at all over other council buildings, resulted in a protest by around 1,000 loyalists outside the City Hall and ultimately a small disturbance. There was also trouble in East Belfast when the result was announced including an attack on a Catholic Church.

In preparation for the vote the Democratic Unionist Party had distributed tens of thousands of leaflets attacking the Alliance Party which had indicated it would not support unionist demands that it continue to fly all-year round but would propose that it fly only on designated days.  This is around 15 days a year on occasions like the Queen’s birthday and is the policy at Stormont where the devolved Assembly sits.  Nationalists had stated their intention to call for a vote which would have led to the flag not being flown at all and the Alliance proposal was seen as a compromise.  Holding the balance of power in the council it was widely expected the Alliance proposal would succeed, as it did.

In the build up to the council meeting the loyalist Progressive Unionist Party (PUP), which is the political front of the paramilitary Ulster Volunteer Force (UVF) stated that while its previous position was that it accepted the flag should only fly on designated days, now that it was being demanded by nationalists it would oppose it.  Sinn Fein has claimed that the UVF was prominent in the protest which led to the minor violence.  There is no doubt that loyalist paramilitaries were behind the violence in East Belfast.

At the demonstration the usual sectarian songs and slogans were recited and an Irish tricolour was burnt.  The BBC interviewed some participants in the protest.  One protested about the need to defend the flag that had been flown in Afghanistan while inside a DUP councillor protested that nationalists were attacking the union flag and other parts of Protestant identity.  The case against flying the flag could hardly have been better made by those opposed to it.

Loyalists defend the flag because it is a symbol of imperialist might and of sectarian identity while liberals complain that it is the flag of the country and should not be confused with sectarianism.

Of course flags are symbols of states.  They fly to denote the claims of that state over territory or over institutions.  They cannot be divorced from the history and policies of that state or institutions and they cannot be divorced from the actions of those who fly it.  For all these reasons the union flag is a symbol around the world of empire, military adventure and occupation and in Ireland it has a history of being identified with a sectarian state and sectarian practices.  The protestors were defending it because they support all of this, they support imperialism and sectarianism.

The approach of the PUP is instructive in this regard.  To Catholics their policy is – yes you can have rights, but only those we will let you have.  So you would not have to put up with the union flag flying every day if you had kept your mouth shut and not tried to change it but now that you have you must be prepared to suffer protest and intimidation.

This is the point that all those complaining about pointless arguments over flags refuse to take on board.  If the continued flying of that flag results from the exercise of intimidation then that is what the continued flying of that flag represents and that is what it symbolises.  It would do so, and has done so up to now, because that is what has allowed the flag to fly.  As a symbol it represents sectarian intimidation and the union flag symbolises the power of a state established by force and sectarian intimidation.  That it is now defended in such a way simply confirms this.

Some further observations can be made.

The rabidly sectarian character of the protest and opposition inside the council chamber blows yet another hole in the ‘campaign’, if that’s not too strong a word, by Peter Robinson and his claim that Catholics are happy with the union, partition and can be won to support the DUP.  If the flag of that union is claimed by its defenders as a part of a sectarian identity just what part of the state are Catholics supposed to identify with and support?

Garnering non-sectarian support for British rule is the role of the Alliance Party and it is no coincidence that the main target of the unionist campaign was this party.  The intention of the DUP is to win the East Belfast Westminster seat back from that party and sectarian flag waving is the way to do it.  That in doing so the claims of Robinson are exposed is not accidentally ironic.

The protest was relatively small despite the effort put into it but the reaction from the state was instructive.  The police had their usual low profile which was criticised by Sinn Fein and compared to what their activity would have been had 1,000 republicans turned up.  The presence of  figures reminds everyone, or rather it should, of the Chief Constable’s attendance at the PUP party conference earlier in the year.  This is now neatly sandwiched between UVF rioting in the lower Shankill and similar activity in the city centre and East Belfast.  This attendance signalled acceptance of such activity as part of the normal rules of the game but rules which should not be overstepped.

BBC interviewers refused to entertain criticism that loyalist figures were in attendance and might have something to do with the violence.  Fortunately one no longer has to worry whether the BBC will similarly refuse criticism of Osama Bin Laden on the grounds he is not in the studio to defend himself.

Concentration on the small size of the protest is therefore misplaced.  Unionism has increasingly taken to the streets, reflected in sectarian exhibitions in Donegall Street outside a Catholic Church and in the very large Ulster Covenant demonstration. The City Hall protest was sponsored by the main unionist parties who are both in government and they have signalled the issue is not over by promising to demand that the union flag is flown permanently at the cenotaph in the grounds of council buildings.

Even as low level controversy sectarianism is necessary for political rivalry and feeds continued division.  It sets wider political expectations and exposes the limited role of the state in combating expressions of sectarianism.  The liberal pretentions of the British state are allowed to continue to be presented as the only choice and the effect is to enforce an unacknowledged intimidation of alternatives.

In the larger scheme of things this particular issue does not threaten wider instability but it is one of a number of sectarian outbursts that remind everyone who cares to pay attention that the sectarian dynamics of Northern politics and society remain intact.  It is very unlikely that the continued brewing of this sectarian kettle will forever remain off boiling point.

1 thought on “Fighting over flags in Belfast”