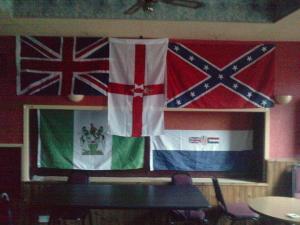 Flags of the Left?

In this week’s Belfast nationalist paper ‘the Irish News’ their regular columnist Brian Feeney put forward the claim that Protestant unionist workers had been duped into believing that being left wing was also to be ‘disloyal’.  Presumably these workers can therefore be left wing and ‘loyal’.   Indeed this is the thinking behind recent proposals within the United Left Alliance to build a “new mass working-class party in Northern Ireland to unite the working class against sectarian division and against the right-wing austerity of the Assembly Executive.”

An obvious objection to the ULA proposal is that it claims to stand for workers unity while accepting the division of workers created by partition.  The only way this can be justified is by accepting unionist claims that such workers unity should not exist.

A smarter unionist might claim that the unity of Irish workers would break the unity of the workers in Northern Ireland with those in Britain.  The problem of course is that Irish workers unity is sacrificed for a unity that does not exist.  There is in reality no genuine UK workers unity because most British workers regard those from Belfast, Derry and Enniskillen as Irish.  No carnival of reaction predicted before, and confirmed afterwards, by partition is likely upon the separation of the North of Ireland from Britain.

So we are back to the repeated collapse of what often passes for socialism in Ireland before the veto on workers unity demanded by unionism.  If such unionism is inherently and unavoidably reactionary then it is clear that such a veto should be rejected.  It might only be accepted if it could be credibly claimed that Feeney is right – Protestant workers are merely duped into believing that being left wing is also to be ‘disloyal’.

Unfortunately Feeney gives enough examples of the reactionary character of real unionism, as opposed to the pretend hypothetical unionism that at no time and nowhere has existed, to demonstrate that a different sort will never exist.  He records the mass expulsions of Catholic workers from the shipyards by sectarian unionist mobs in 1912 and 1920 when around 2,000 were expelled in the former year and thousands more in the second.  Crucially he also notes that 500 Protestant workers were also expelled in 1912 and 1,800 in 1920.  These were ‘rotten Prods’ who failed to demonstrate their true credentials by not being bigots.

Feeney notes that these Protestant workers refused to put an ‘ethnic’ solidarity, in reality a sectarian solidarity, in front of any other.  Some supporters of the ULA are presumably content that Protestant workers can accept this sectarian solidarity while being ‘left wing’.  If they did not put this sort of sectarian solidarity first then there could in principle be no objection to proposals for the unity of the whole Irish working class.  Proposals within the ULA that avoid this conclusion are in practice accepting that sectarian identity must be accepted and accommodated.  In other words sectarianism must be accepted and accommodated.  Protestations to the contrary can in reality be dismissed.  Political positions have consequences and in this case these are quite clear.

Feeney records the words of Peter Robinson of the DUP that ‘the unionists of Ulster were a distinct people entitled to determine their own future.’  Since the most right wing forces will always be the most vigorous defenders of this position acceptance of it necessarily means acceptance of the leadership of Protestant workers by the most reactionary bigots.

As to the cogency of Robinson’s claims – the unionists of Ulster were happily the unionists of Ireland until they could no longer garrison it all whereupon they then demanded not that they determine their own future but that the imperialist power did.  This then amounted to the seizure of both more than the territory within which they were a comfortable majority and less than would include all the Ulster unionist people they claimed they were.  The character of the movement that expressed this people politically became evident when it came to determining not their own future but that of the large Catholic minority they took with them.  This minority was subject to sectarian pogroms and systematic discrimination for nearly half a century before a civil rights movement exposed the irreformibilty of this unionist movement.

We can go back to Feeney’s claim that Protestant workers have been duped into believing that being left wing is ‘disloyal’.  It is obvious that they have not.  For what is it that unionism claims that there must be loyalty to?  Loyalty to what?  Well – to Queen and country!  To a monarchy and an imperialist power.  To partition and division.  To a state based on a sectarian head count.  To the rights and privileges of Robinson’s ‘distinct people’.

How could you possibly be left wing without being disloyal to all that?

Apologists on the left for capitulation to unionism put forward the final argument that we must accept unionism because the vast majority of Protestant workers are unionists.  In fact it is this very fact that makes opposition to partition absolutely necessary.  Opposition to partition is not necessary despite the unionism of Protestant workers but because of it.  It is not possible to break their commitment to this reactionary political programme without defeating it and it can only be definitively defeated by destroying the state power on which it bases its power.

2 thoughts on “Can Ulster Unionism be left wing?”