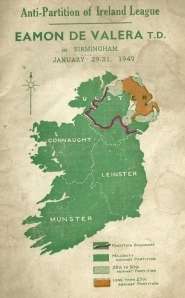 In an article in the ‘Irish Times’ a couple of weeks ago Andy Pollak, Director of the Centre for Cross Border Studies and a former Irish Times journalist, takes up the observation that “interest among people in the Republic these days in Northern Ireland is minimal.”  “As somebody who lives in the South and works in the North, my experience in recent years, as the economic and financial crisis has come to dominate public discourse, is that southerners largely don’t want to know any more.”  Since previous interest was taken mainly to be revulsion at the violence and gratitude that it was “up there” and not “down here” this might not seem a new issue.  In fact both reflect how deep is the division that partition has created after nearly a century of existence.

Pollak quotes the young woman in the audience of the RTÉ Frontline programme during last October’s presidential campaign who attacked Martin McGuinness: “As a young Irish person, I am curious as to why you have come down here to this country, with all your baggage, your history, your controversy? And how do you feel you can represent me, as a young Irish person, who knows nothing of the Troubles and who doesn’t want to know anything about it?”

First we must say that this is indeed a strong illustration of the division that exists between North and South of the border; all the stronger because of the happy ignorance that is displayed.  On the other hand this happy ignorance demonstrates that the division which she articulates is really an expression of the unity that she is so ignorant of.

Happy ignorance?  Well yes.  The young woman speaks of coming “down here to this country” which is actually the same country, while being a different state.  She mentions “all your baggage, your history, your controversy” without appearing to be aware that the State she lives in shares much of this baggage, history and controversy.  After all, is she not aware of the history that includes the War of Independence, the Civil War (mainly in the South) and baggage that includes Catholic Church domination of society that involved systematic and widespread abuse of thousands of women and children that still resonates today?  Is she not aware that ‘the troubles’ had its worst single episode of violence in the Southern State carried out partly by agents of the British State?  Happy in her ignorance because she herself declares she “knows nothing of the Troubles and . . . doesn’t want to know anything about it.”

The disconnect between this young woman’s understanding and real history is perhaps an example of the invention of nations that don’t exist, or sometimes later do come into existence.

Pollak says that “opinion polls over the past decade or so show that a bare majority of people in the Republic now say they want a united Ireland: for example, in the 1999-2000 European Values Survey, just 54 per cent of people favoured unity.”  He quotes one University College Dublin student as saying: “Neither of us want Northern Ireland: neither us nor the UK government. I’d say if you asked the majority of Irish people – yes, nationalists, out of a sense of allegiance, might say they wanted a united Ireland – but it’s really far more trouble than it’s worth.  I mean, to integrate Northern Ireland into this State – why would you be bothered? The status quo satisfies everyone.”

Let’s take this statement bit by bit as well. The UK state doesn’t want Northern Ireland?  A very common opinion but one that is impossible to square with the experience of the British State spending billions of pounds and engaging in a long counter-insurgency campaign in order precisely to keep hold of the Northern State.  We will not go into the reason why here but let us recall that Britain left previous parts of empire extremely reluctantly.  Why hasn’t it left this bit if it actually wants to in this case?

So “yes, nationalists, out of a sense of allegiance, might say they wanted a united Ireland – but it’s really far more trouble than it’s worth.”  What trouble might this be?  Well we know that just as partition was imposed on the Irish side of the Treaty negotiations on the basis of the threat of immediate and terrible war so we know that partition today must be unquestioned because of the perceived threat of loyalist violence.  A loyalist violence that the last thirty years have shown the British State is quite happy to support and sponsor.

I would bet that many UCD students are very far from satisfied with the status quo but that they don’t see their dissatisfaction with the Southern State as having anything to do with partition.  If it’s not part of the problem then why would opposition to partition be seen as part of the solution?  What we have is graphic demonstration of the division of the Irish people that partition has caused that satisfaction is expressed in a State which many are in despair of because its problems are not seen as having anything to do with the other bit of the country divided.

That the domination of the Southern State by outside powers, who have dictated that their banks must be protected by the Irish people bailing them out, is not connected at all with the political rule in the North of the foremost political power in Europe most enmeshed with banking is the result of a number of factors.

The first is that such is the seeming power of these outside forces they seem almost like a force of nature, or if not, then an unalterable fact of life.  The second is that when there has been opposition either to the Northern State or to how the Southern State exploits its citizens this opposition has made no attempt to link the two questions.  The third is the more or less complete absence of any force that wants to do this.

Instead workers have been able to react only to the more immediate appearances of their oppression. This appearance is framed as a political question by the State, which is often the mechanism for enforcing it and sometimes by the putative opposition putting forward the state under different governance as the solution to oppression.

This importance of the state in distorting socialist politics has been a theme of the blog so far.  For most people, including what passes for militant opposition, the necessity of fighting two States is one too many.  In fact consistently fighting one is one too many.  That is how deep the division created by partition is.