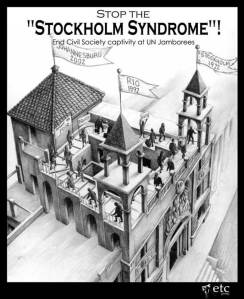 Today the State is inflicting attack after attack on working people but just like sufferers of Stockholm syndrome many people keep coming back to ask it to protect them.

It is not that this is an idea with no rational content at all.  It does have a basis in reality but not one that justifies the political positions of some of the Left.

Last week on RTE news some disabled people were interviewed protesting outside the Dail at cuts to personal assistance, without which they might be forced into hospitalisation or else left to suffer appalling neglect.  Their protest was a powerful demonstration of the enormous dependence some of the most vulnerable have on the State and the capacity of that State to mistreat them appallingly.  While the media and others basked in the achievements of Irish athletes in the Paralympics in London the Irish State was preparing to shaft disabled citizens at home.  The protests succeeded in getting a U-turn on the proposed cuts and a rare but welcome victory.

This is but one example of the welfare state which is what the Left has in mind when it defends the state.  Where the right wing scream private good and public bad the left has often responded by defending public services and with declarations of the evils of the private sector.

Opposition to welfare cuts and to cuts in education and health services should not however imply any wider defence or support for the state or ‘public sector’.  The public sector is a large bureaucracy that has no democratic content, often providing poor and inefficient services.  The state training agency FAS is just one outstanding example of the corruption and wastefulness of the provision of services by the State. These are run by a capitalist state, in the interests of capitalism, by bureaucracies totally unaccountable to working people.  Why on earth should there be any inclination to defend what we are not responsible for? What we have no control over? That should rightly be criticised by us for its often bureaucratic waste of our money?

And this is the point. It is working people who pay for the welfare state, not the rich and not capital.  In a paper written some years ago the Marxist economist Anwar Shaikh sought to examine the argument that excessive welfare provision caused economic stagnation and unemployment.  In the course of this he demonstrated for six major countries (US, UK, Australia, Canada, Germany and Sweden) that this was not the case.  His central finding has relevance to our own argument, which was “that social benefit expenditures were financed out of the taxes paid by recipients of these very expenditures: in other words, by and large, social welfare expenditures were self-financed.”

The capitalist state taxes workers and then bribes them with their own money while liberals loudly declare that taxation is somehow progressive, even left-wing, and should be increased to improve welfare servicers and boost the economy.  Workers are expected to uncritically support this as if ‘the State’ is paying for something when it is actually they that are doing so.  The key question of ownership and control of the services provided by the state is ignored and the debate is framed in terms of the supposed ‘socialist’ position of ‘tax and spend’ and the right-wing position of cutting taxes and privatisation.

This framework has been used by the right to push privatisation, presenting it as the only alternative.  But it isn’t, and opposition to privatisation is not itself an alternative to the failures of health system or education systems that consistently betray those most in need of their help.  Too often the woeful character of state services has been defended in some misguided belief that defending state ownership is defending the workers delivering the services.  Such an error is rarely made when the unsatisfactory nature of services or products produced by workers in the private sector comes under similar attack.  It is against this background that the State seeks to divide private sector workers against public sector workers and portray the trade unions, often accurately enough, as primarily interested only in the latter because that is where their own bureaucratic power base resides.

While socialists must oppose privatisation as a solution to the inefficient provision of services we should never confuse this with support for or excuses for poor State delivery of services.  Too often the attacks on the working conditions of those employed to deliver these services are made prior to privatisation, or prepared prior to privatisation, by the state itself.  Nor is it true that state ownership guarantees better delivery of services.  The appalling neglect of older people in care for example has taken place under both private and state provision.

So what we have then is the provision of welfare state services which workers pay for but which are delivered often bureaucratically, with no democratic control and often in oppressive ways, such as the means-testing of welfare recipients.  Many workers delivering the services conscientiously do their best but this is despite rather than as a result of how they are organised and managed.  Simply demanding more welfare ignores all this and ignores that it is workers who pay for it.

Many are happy to pay because they care about the services provided and have in the past or will in the future benefit from them.  The provision of unemployment insurance etc. limits the devastation to living standards consequent on redundancy or sickness.  It puts a floor under the minimum wages capitalists can demand, which is why they always want it reduced; but fundamentally it is necessary because a pool of unemployed is necessary for capitalism and this pool must be of sufficient quality to take up employment when it is available.  Welfare capitalism is necessary for the capitalist system as a cost effective way of preserving the quality of labour power.  It is not fundamentally about delivering on the human needs of people.

The large growth of the capitalist state sector, from an average in the OECD (advanced capitalist countries)  of 27 per cent of gross Domestic Product in 1960 to 42 per cent in 1988 (statistics from Shaikh paper), has been the material and ideological power base of social democratic ideas that the capitalist system has been or can be reformed, if not into socialism, then at least something ‘different’ or along vague lines of ‘another world is possible’.   The limited standards of the services provided and endemic insecurity under which welfare recipients live are one testament to the limits and precariousness of this social democratic vision of reform.

Workers expected to row in behind demands to defend a large state should be aware that this sector has grown in recent years because of the state’s role in preventing a financial collapse pushing the whole capitalist system over a cliff. In Ireland, as in many other countries, workers are having to pay for it through tax increases and service cuts.  The last thing workers need is the idea that the State is something neutral that can be captured to represent its interests.  Yet this is the present perspective of much of the Left who have diagnosed the current situation as first of all a ‘crisis of working class representation’.  That is, a crisis of the social democratic illusions that once had hegemony over many workers, although to a much lesser degree in Ireland, who have suffered mainly from capitalist populism.

This dependence on the State as part of the fundamental programme of the Left is the ideological explanation for the electoralist strategy now so much a feature of the Left.  It is no accident that the need for a United Left Alliance was suddenly seen before the general election.  Having made the electoral intervention the need for unity was then considered by some as no longer so strong and the promised progress to a real party has evaporated.  We know when it will come back, if it’s not too late.

If this is at least one of the ideological origins of the chronic electoralism of the Left it must still be explained why this has happened given the parallel ideological notion that what the Left organisations want is a revolution in which the working class seizes state power.[i]

Whatever about the belief in revolution this has not been a practical proposition for many years: during the Celtic Tiger boom or the social and political defeat of workers during the previous couple of decades.  So, while often preaching revolution in the future, as a matter of pure practicality it has done what is actually possible.  Given its ideological confusion on the role of the state and having no conception of revolutionary politics outside of a contest for state power the Left has degenerated into electoralism.

The real Marxist attitude to the state, as opposed to dependence on the state for solutions, which I have looked at here, here and here for example, will be the subject of future posts.

[i] I realise that the Socialist Party has political roots which eschew this traditional Marxist view in favour of a perspective of a Left electoral victory, leading to majority in Parliament passing legislation nationalising big industry with the support of mass mobilisations, this allowing the introduction of what they believe to be socialism. But this has always been a relatively hidden revision of Marxism that is disguised by what is presented as a rather rigid orthodoxy.