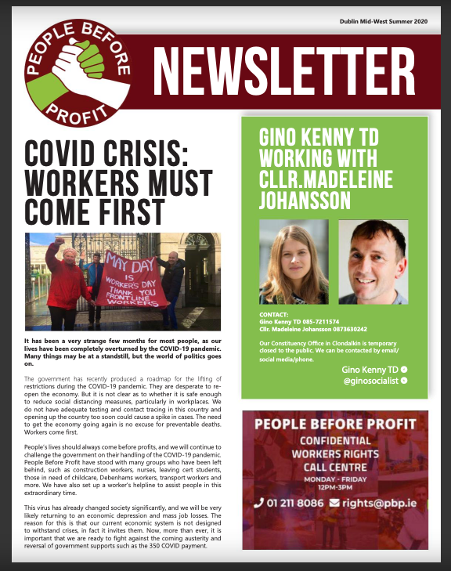 A couple of weeks ago the Irish Government announced a new plan to deal with Covid-19.  It consisted of five levels that were to signal the approach everyone should take to social distancing and the restrictions the Government would impose.  These guidelines and restrictions would follow from the perceived level of threat from the virus.

Immediately however Dublin fell into level two and a half and quickly moved to three and a bit, though the trajectory of the infection had hardly changed.  Far from the new plan setting out discrete levels of intervention and expected behaviour, the expected behaviours and interventions were not consistent with the plan, or the plan was not consistent with the interventions.  Either way the plan immediately became discredited.

But this is the least of the problems with it.

One argument was to ‘flatten the curve’.  In other words, reduce the strain on the health system and prepare for an elongated engagement with the virus based on an expected ‘second wave’.  The problem with this is that the health services have less resources immediately available to it than before, with the ending of sequestration of private hospitals, and there has been no satisfactory expansion of the test and trace system over the summer.

We are promised a planned expansion of health services but these cannot be conjured up in weeks or months and there can be no assurance that what we will get is not a reduction in normal critical care to permit less critical, but now more politically important, Covid treatment. The alternative potential outcome is that Covid-19 is not as threatening this time, but this hardly accords with the Government message.

But this isn’t the only problem, because it is becoming clear that a hoax is being perpetrated and it isn’t the crazy one from the deranged far right – that Covid-19 doesn’t exist.  The last week has revealed that, according to Prof Philip Nolan of the National Public Health Emergency Team, public health doctors ‘don’t need to know” where someone got the disease. “We don’t have the time or resources to pursue this academic exercise” he said.  Which rather makes a mockery of the whole plan, based on isolating the virus.  As this blog has said repeatedly – it’s not the virus that is being isolated but the people.

So if knowing where infections spread is not important how do they then know where to limit activity, where to shut up and for how long?  Hundreds of thousands of jobs will be lost on the basis of an guesses and assumptions paraded as expert evidence-based public health practice.

This might be considered the most scandalous admission but it isn’t.  Instead, that award goes to the admission that, as infection rises among the older population, the Health Services Executive chief clinical officer states that it is not possible to keep nursing homes and other congregated older settings completely immune from a virus spreading through the rest of society.  Over half of those who have so far died did so in these settings but the Government can’t promise there won’t be some sort of repeat.

It is well known that younger people have relatively, and absolutely, little to worry from catching the virus unless they have a relevant underlying health problem, yet it appears that they have to be locked-down to protect those really at significant risk.  Everyone has to be controlled to control the risk to those really threatened.  But is it easier to protect everyone from a virus that is widespread or a minority of the vulnerable?  Well, how did the original more restrictive lockdown go?

The Government approach attempts to scare everyone, with some evidence of success, when this is not credible.  And this lack of credibility has infected the population, especially the young, who seem perfectly aware that they are not significantly at risk.  This discredits those public health messages that really are important and it detracts from mobilising the majority to realise the need for them to assist in the protection of the vulnerable.  For the latter, if everyone is threatened and so many are ignoring or resentful at the advice and restrictions being introduced, why should their responses be different?

More and more credible arguments against the current approach are being reported but the longer the mistaken strategy continues the more difficult it is for the Government to change tack, even as the end of the process seems further and further away.  If it did it might have to admit to an enormous series of mistakes we will have to pay for, and for a very long time.  In the meantime, continuation of the current approach leads to inconsistent and contradictory advice and measures that arise because the strategy is mistaken.

The bill for this has been paid for in direct deaths from the virus, from the absence of treatment for other critical conditions, from the effects of social dislocation and isolation and from the massive economic cost that will be paid for in health terms as well as in reduced living standards and life chances. Here, it will be predominantly the young who will be most affected.  The current approach is not one that should divide generations but one that should unite them.  The higher incidence of Covid in poorer areas with greater prevalence of the underlying conditions that entail heightened risk makes it a class issue as well.

All the more reason then to note that the current attitude of the left is a disaster.  Far from seeking to base itself on understanding what is going on, seeking an effective alternative and challenging the draconian restrictions on democratic rights.  Far from highlighting the enormous cost that will be imposed on working people, it has supported the Government, except it wants greater restriction and calling for more money from the Government as if it is going to pay the enormous bill.

Every day, the press and media declare that the Government will pay this wage subsidy or that pandemic unemployment benefit, provide this support to small and large business and that tax exemption.  The left appears either to assume that money will simply be printed so it is considered more or less costless, or no thought is given to it at all.  But of course, the Government will not pay out of its own pocket because the pocket of the Government is the pockets of working people.  The money spent will be borrowed and working people will pay back the debt.  How could this be a surprise – the left is always going on about how unfair the taxation system is but here it is proposing to unnecessarily make the potential burden so much greater.

Some on the left might entertain the idea that printing money will work, but money is a claim on the real resources of society, the resources created by the labour of the working class, and only this labour creates these resources. Once this is understood, as it is supposed to be by Marxists, it is abundantly clear that paying people money for closing the place that they work in, or the business that they own, will not create any additional resources but will create an enormous financial bill that will have to be repaid.

I had a discussion on Facebook with a contributor who argued that since capital created the mess it can pay for it and workers should make sure that it does.  I argued that if all these payments were for our own good we were on weak ground rejecting paying the cost, regardless of who was to blame.  Workers in Ireland have found it hard to fight against their tax burden in the past, with Ireland having a history of such resistance going back to the 1970s.  The burden imposed by the financial crisis wrought by the Celtic Tiger crash doesn’t bode well for further imposition and confidence in successful resistance.  It makes no sense to make this challenge so much greater if we can prevent it.

Were we really able to get capital to pay the enormous bill coming we would either have replaced it, or capitalism would no longer be the exploiter of the working class socialists have always claimed.

Richard Boyd Barrett TD for People Before Profit admits new public health restrictions planned for Dublin were “sadly necessary” given a rapidly rising infection rate but that they “reflect a failing and incoherent strategy.”

“The government’s failure to plan for and resource permanent capacity building in key areas such as test and trace, health and ICU capacity, school infrastructure and teacher numbers is now coming back to bite us all with a vengeance.”

Many of the issues raised in this statement are correct, but they do not amount to a strategy that will work and have all the defects just presented, because essentially it is built upon the same strategy as the Government’s.  It is but a supercharged version of Kier Starmer in Britain, who also supports the Tory Government’s strategy but simply wants it implemented competently.

From the social democrats of Labour to the ‘Marxists’ of People before Profit and others, the left has failed.  Failed on the two biggest issues facing Irish (and British) workers today – Covid-19 and Brexit.  Both have been a disaster for workers and both are now supported by major parts of the left, with the caveat that they support the most stringent version of both – greater restrictions on free movement and a more complete Brexit.

This is a left that is seriously lost; if its programme had actually been followed, including an Irish exit – Irexit – we really would be facing disaster.

3 thoughts on “Covid-19 – try again, fail again, but some people would have made it worse”